This was one of the most remarkable games I can remember, certainly the most improbable late-game comebacks in a while. The IND-KC playoff game last year can't be overlooked, but this game had a completely different quality to it. The post-mortem on GB today is in full swing.

GB head coach Mike McCarthy deserves all the criticism he's taking. Those who are dismissing the criticism with terms like "hindsight is 20/20" and "woulda, coulda, shoulda" or pinning the blame on a lack of execution on the onside kick are off the mark. There's nothing hindsight about the analysis. In fact, the 4th down analysis (courtesy of the 4th down bot) runs in real-time, and all the models along with their recommendations are on record long before the kickoff. All the mistakes were avoidable.

Let's look at the autopsy through the lens of Win Probability.

Before we get into the decision analysis let's look at how unlikely the comeback really was. Surprisingly, SEA never had worse than a 0.02 WP (2% chance of winning), and that wasn't until 3 min to play when SEA's second TD drive appeared to stall. Every season there are a small handful of comebacks from a 0.01 WP, and maybe even lower--the old model doesn't have the resolution to see WP's below 0.01. The game had a Comeback Factor (CBF) of 50, but there are plenty of games in the database with CBFs of 100.

Today I heard several commentators say that McCarthy was correct to 'take the points' on the two 4th downs in the 1st half. The reasoning was that you're not going to score a lot vs SEA's defense, so take any point you can get. It turns out the precise opposite is true. If you expect to have very few scoring opportunities, you're far better off optimizing the few opportunities you do have.

The game disproved one of the biggest tropes in football analysis--that patterns or trends early in the game indicate how the rest of the game will play out. SEA was shut out until 5 min left in the 3rd qtr, then scored four TDs.

The second 4th down was also a 4th and goal from the 1, this time with 5:10 in the 1st. This was only barely less costly, because GB was up by 3 at the time. It came with a 0.034 price in WP. That's a total of 7 percentage points of win probability just for those two decisions. I can be a broken record on this point, but this is not nearly as small as it sounds. 7% is really, really big. To help put that in perspective, last four seasons' all-pro RB averaged 0.06 Win Probability Added per game during their peak season. Forfeiting .07 WP would be worse than Seattle choosing not to dress Marshawn Lynch just for grins.

The third 4th down was debatable. This one was 4th and 1 from the SEA 22 with 9:42 in the 2nd qtr. GB was up by 13 at the time. The WP 2.0 model was basically indifferent here, but slightly favored going for it, 0.886 WP vs 0.882. But recall that going for it assumes no more than the minimum yardage needed to convert, so any "tie" goes to going for it. The FG was a defensible decision here because it put GB up, realistically, beyond two scores.

The biggest 4th down of the game, however, was SEA's fake FG score. That was a 4th and 10 from the GB 19 with 4:50 to play in the 3rd qtr. SEA was down 16-0 at the time. Maybe coaches tend to go ahead with the FG in the regular season to take the shutout off the board, but this was a conference championship game. To not be fully prepared for, and fully expecting, a fake play was unbelieveable. The chances of blocking a kick from that close (the kicker can use a high trajectory) is close to zero. A FG doesn't really hurt. A successful conversion (not even a TD, just the 1st down) was worth 0.117 WP while a successful FG was only worth 0.067 WP. The TD gave SEA a .148 WP. With 10 yards to go, a straight play from scrimmage would not have been the 'analytically-correct' call; only a fake FG had a worthwhile chance of hurting GB.

Sliding after the Interception

I thought it was a good idea. It's impossible to say if Burnette would have scored or gotten near FG range, so I won't try to quantify it. Fumbles do happen remarkably often on turnover returns. I can't fault a player in the heat of play as much as a coach on the sideline, so I'll leave that one alone.

GB had two bites at the apple to try to snuff out SEA's chances in the final few minutes. In their two possessions, they went run-run-pass-punt and run-run-run-punt, ultimately giving SEA 3:07. SEA gambled and played run, and the 4-min offense backfired on GB. In fairness, leaving SEA 3 min to score two TDs was not a bad position for GB to be in. However, in general, my analysis suggests offenses would be better off abandoning the '4 min offense' and simply playing straight up offense. That doesn't stop them from using common sense and staying in bounds, or taking a sack on 3rd down rather than throwing the ball away, stopping the clock.

The most bizarre part of all this was McCarthy's post-game explanation. He said he was targeting 20 runs in the second half. Man, that is dangerous thinking--targeting a specific run count or run/pass ratio. I can't believe coaches still think that way, especially in this era. If McCarthy didn't have Rodgers as his QB,...well, I'll say it would expose a lot of errant thinking, and leave it at that. 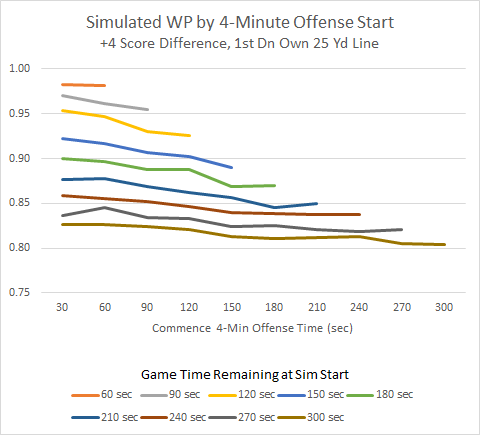 Obviously that was huge, but it wasn't a slam-dunk call. SEA could have gone either way. With one timeout left, they could get the ball back with 1:06 left. That's not a lot of time, but remember that there a lot of things that could happen. One of them would be that GB would have the ball back with 3 timeouts and enough time to take the lead. Remember that even if SEA scores the TD, the 2-pt conversion was required to go up by 3. Otherwise, a FG would win it for GB. One reason the model is indifferent there is that recovery rates are down for expected onsides since the 2009 rule changes requiring a balanced kicking formation.

SEA's 2-Point Decision, No not that One

SEA's 2-pointer to go up three was a freakishly amazing play and made all the difference in the ultimate accounting, but they had the option of making it a one-score game after the fake FG TD. It was the right call not to go for two. They would need at least a 55% success probability to make it worthwhile with about 5 min left to play in the 3rd qtr.

Amazing game on a lot of fronts. The play on the field determined the outcome, but a lot of small mistakes added up to become very costly in the end. This analysis is not after-the-fact second-guessing. The analytics are there for any team to use long before kickoff.


Addendum: The original version of this analysis omitted the second 4th and goal from the 1 from GB.