How Much did the Reversed Penalty Affect the Lions-Cowboys Game? 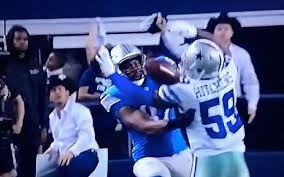 The Lions led the Cowboys 20-17 with 8:25 left to play in the 4th quarter. On 3rd and 1 from the DAL 46, QB Matthew Stafford threw incomplete to WR Brandon Pettigrew. The officials threw a flag and announced a pass interference penalty on DAL, which would have given DET a 1st and 10 at the DAL 30. But the officials picked up the flag and never enforced the penalty, leaving DET with a 4th and 1.

This was a controversial call by the officials, to say the least. So the question is, how big was this call on the outcome of the game? The Cowboys went on to win, but that doesn't mean the call caused DET to lose with certainty. Either outcome was still possible after the call. We need to think of things probabilistically. Let's break down the effect of the official's call using the new Win Probability Model. After picking up the flag, DET had a 0.672 win probability (WP). Had the pass interference penalty been enforced, DET had a 0.794 WP, a difference of about 0.12 WP or 12 percentage points. That's a big play, but not decisive. To put it in perspective, Stafford's 21-yard pass to Fuller in the 4th quarter to get out from under the shadow of DET's own end zone was worth 0.10 win probability added (WPA). Stafford's 19-yard pass to Johnson in the 3rd quarter on 3rd and 9 was a 0.11 WPA play.

A 0.10 WPA play is a significant event, and although I don't mean to minimize the unprecedented nature of that non-penalty, DET still had the upper hand in the game following the call. But if I were a Lions fan I'd have some very strong feelings about the way that game unfolded, and I think I'd have good reason to be upset.