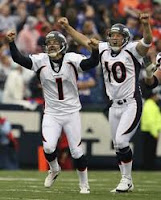 Last season I looked at the effect of temperature on field goal success and saw that a 30-degree difference is approximately worth 5 yards of kick distance. A 40-yard attempt in 30 degree weather is like a 45-yard attempt in 60 degree weather. Much of the effect can be attributed to the increased air density in colder air. But what about altitude? How does the thin air of Denver's Mile High Stadium affect field goal success?

When it comes to altitude, there's Denver's 5,200 feet and then there's everywhere else. Phoenix is the next highest at about 2,000 feet, but it's almost twice as close to the sea level as it is to Denver. To compare apples to apples as much as we can, I compared Denver's FG success with that at other outdoor stadia. I excluded Arizona for the purposes of the comparison, and only included kicks in moderate temperatures from 41 to 80 degrees.

Also, because about half of all kicks in Denver in any given season are by the same kicker, I restricted the data to visitor kick attempts. Here is how the field goal success shakes out.

Kicks in Denver do indeed have longer range, to the tune of about 5 yards.