How Much Is Joe Flacco Worth? 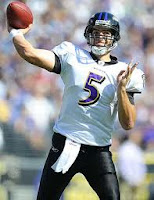 Joe Flacco is finishing his 5th year in the league. It's a contract year for a QB who remains frustratingly difficult to assess. He shows flashes of brilliance in one game only to be followed by apparent ineptitude in the next. He has the size, the strength, the arm, the accuracy, but there's something missing.

Statistically, he's just as hard to figure out. Among all QBs since 2008, when Flacco entered the league and began his uninterrupted starting streak, his WPA has exceeded his EPA. Of the 30 QBs with the most attempts since 2008, Flacco has the 3rd highest ratio of WPA to EPA. Most observers would call him "clutch."

Based on the recent historical relationship between QB performance and salary, we can estimate Flacco's market value. But depending on how we value his production, we get very different salary values.

Flacco is remarkably consistent. Receivers come and go, and lineman come and go, but since his rookie year Flacco is a rock solid 70 EPA per year guy. Adjusting for team cap inflation, that makes Flacco worth approximately:

But if we consider that Flacco consistently puts up about 3.0 WPA per season, we would estimate his value at:

Adjusted for 2012 cap dollars, that's worth an annual salary of $15.4 million, which is in 'elite' territory.

The question is which measure is most appropriate for valuing a QB. We know that WPA is more volatile and more sensitive to game situations beyond the control of a single player. And EPA is less sensitive to unique game situations. Still, something should be said for a player who has a knack for knowing when to throw the ball away and when to force it into coverage. Like most things, the truth is somewhere in the middle, but I'd lean toward the EPA-based estimate.

$11 million in 2012 cap dollars feels right to me. That's a little more than half of what Brees got from the Saints last year.  Depending on how the league cap is projected to increase over the duration of Flacco's deal, it will come out a little higher in absolute dollar terms. The franchise tag would cost Baltimore about $14 million for one year. The question is how much guaranteed salary is part of the deal. And keep in mind, these estimates assume a somewhat liquid market for QBs. What are the alternatives for Baltimore? Flacco would have a number of suitors if he's not re-signed.