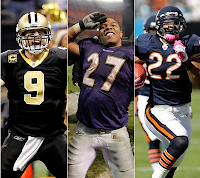 Drew Brees signed a record-setting contract extension for $20M per year over five years. That's about what the numbers suggested for a QB averaging 150 EPA per season. The analysis said $18M should be the going rate for Brees at his peak, which is what $20M per year translates to after discounting over five years. That assumes Brees won't decline over that time, which is a risky assumption for a 33 year old QB. In reality, the final year or two of the contract may not be honored, so overall I have to endorse the deal. The Saints absolutely needed Brees on board as the weather a tough 2012 season in the shadow of the bounty scandal.


Ray Rice signed for five years and $40M, $24M of which is guaranteed. I still believe that RBs are paid about double what they should be relative to their impact on game outcomes, but this deal was right at the going rate for RBs. RBs who reliably average 2,000 total yards per season command about $9M per season in 2011 cap dollars. Rice is only 25 and will be in his prime for at least a couple more seasons. In terms of absolute value I can't endorse any top RB contract, but in terms of the market this is a fair deal for both Rice and Baltimore.

Matt Forte also inked a deal for $8M per year, but only over four years instead of five. He has nearly the same total career numbers as Rice, with over 4,000 rushing yards and nearly 2,000 receiving yards, but total yards can be a very misleading statistic. Total yards are primarily a function of carries. This becomes clear when we compare Forte with Rice. Although they have about the same yardage totals over their four years in the league, their actual game impacts are starkly different. Rice has a +0.05 EPA/play average while Forte has a -0.01 EPA/play average. WPA averages for the two players are tell about the same story, with Rice averaging +0.04 WPA/game and Forte averaging +0.01 WPA/game. Rice has a 40.9% Success Rate (SR) while Forte has a 38.5% SR, a difference which is bigger than it sounds. Rice's YPC is 4.6 while Forte's is 4.2, which is large but admittedly misleading because Rice is not often used in short yardage and goal line situations. In total, the Bears overpaid.

Now, here's a radical thought. If the Bears or Ravens wanted to be really shrewd, they'd sign and trade Forte or Rice. Their value may never be higher. The concept behind Moneyball is trading something away that's overvalued for lots of things that are undervalued. At the end of the process you have a lot more total value. In this case, the overvalued thing is the RB, and the undervalued thing is the draft pick.

What if Baltimore trades Rice to, say, Dallas, and in return gets a handful of top draft picks over the next couple years? The Ravens would be set back this season, but would have a lot more cap room to make up for the loss of Rice. I'm not suggesting using all the cap savings to rush out and get some other overpriced RB. Instead, I'd suggest plugging in the next best option already on the roster or available on the street, and use the money at other critical positions. Over the next several years, the Ravens would come out way ahead. They'd have a bunch of top picks they could use for offensive linemen, cornerbacks, a replacement for Ed Reed, or whatever. And draft picks return a ton of surplus value in terms of cap hit, especially now with the new rookie salary rules. The Hershel Walker and Ricky Williams trades come to mind.