Today we're going to try a new format here at ANS--a debate between me and myself on the market value of Aaron Rodgers' recent contract extension. Rodgers recently signed a deal adding 5 years to his current contract. This will pay him roughly $21M per season over the next 3 years. See if you can figure out which Brian has the right idea and why they get different results.

Brian 1: Rodgers' new deal is a fantastic bargain. He's one of the truly elite QBs in the league today, and guys like that don't grow on trees. But more scientifically, just look at this super scatterplot I made of all veteran/free-agent QBs. The chart plots Expected Points Added (EPA) per Game versus adjusted salary cap hit. Both measures are averaged over the veteran periods of each player's contracts. I added an Ordinary Least Squares (OLS) best-fit regression line to illustrate my point (r=0.46, p=0.002).

Rodgers' production, measured by his career average Expected Points Added (EPA) per game is far higher than the trend line says would be worth his $21M/yr cost. The vertical distance between his new contract numbers, $21M/yr and about 11 EPA/G illustrates the surplus performance the Packers will likely get from Rodgers.

(This plot includes for all free-agent or veteran extensions since 2006. Cap figures are averaged for each player's career and, to account for cap inflation, are adjusted for overall league cap ceiling by season. Only seasons with 7 or more starts were included.) 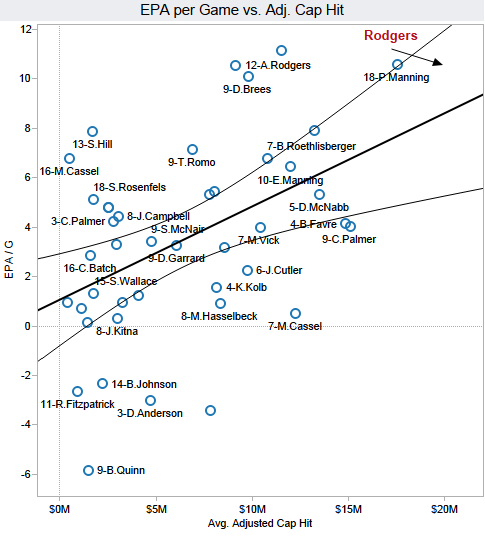 According to this analysis, Rodgers would be worth something like $25M or more per season. If we extend  his 11 EPA/G number horizontally to the right, it would intercept the trend line at $25M. He's literally off the chart.

Brian 2: Brian, you ignorant slut. Aaron Rodgers can't possibly be worth that much money. No NFL player is worth an entire fifth of a team's salary cap. That's insanity--and not like the Insanity Workout kind of insanity, either. More like the Vicky Medoza kind.

I've made my own scatterplot and regression. Using the exact same methodology and exact same data, I've plotted average adjusted cap hit versus EPA/G. The only difference from your chart above is that I swapped the vertical and horizontal axes. Even the correlation and significance are exactly the same. 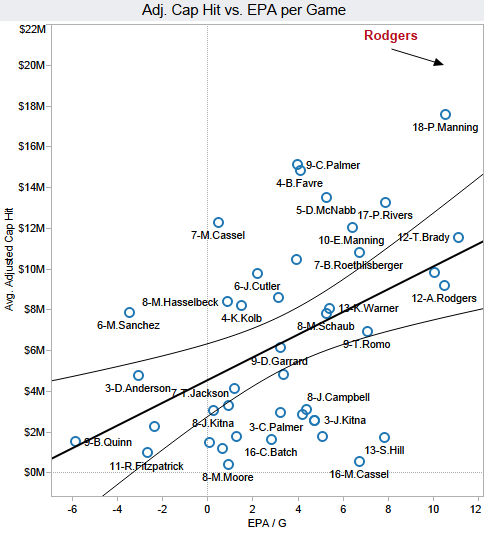 As you can see, you idiot, Rodgers' new contract is about twice as expensive as it should be. The value of an 11 EPA/yr QB should be about $10M.

Brian 1: I think you're the insane one. There isn't a team in the league that would pass up the opportunity to lock up an all-pro QB for $21M/yr. Look, I made a graph and did a regression that was statistically significant.  It's science. Rodgers is a bargain. What do you have against science? What are you, a Republican?

Brian 2: A graph and a regression doesn't make something scientific! Besides I made my own regression, and the facts back up my perspective.

Brian 1: So you're saying it's all about perspective? Deep.

Brian 2: Right. If you're perspective is that of a total idiot, then you'd be correct.

Brian 1: I'll give you the last word.

Brian 2: Rodgers is not a bargain.

So, which Brian is analytically correct? Whatever you think about Rodgers, and there's not much debate he's one of the very best, which analytic approach is right?