How Much Money is a Sack Worth?

I realize it's draft season but I'm still working on building a salary database and combining it with performance statistics. Most of the work in this type of analysis is building the data, but it's harder than it might seem at first. Salary data might use one kind of player identifier while performance statistics use another. Merging them and creating a flat data file to play with is more than half the battle. There's still more I need to do. First up will be segregating free agent years from rookie contract years. But for now, here's some trivia.

Offenses get all the attention, so I thought I'd toy around with what I have so far on defense. Sacks are one of the most visible and tangible defensive statistics. I took the primary sack makers, defined as DTs, DEs or LBs who have averaged over one sack per season in their career, and plotted their career average sack rate against their average cap hit.

A few notes about the data: Only those years with cap hits greater than $1M were included as a crude way to focus on every-down starters. Additionally, only seasons where the player had 7 or more game appearances were included. The data ranges back as far as 2006 for whoever I had salary data for. Cap hit was adjusted for salary cap inflation--All cap hits are in $2012 cap dollars. Lastly, 'sacks per season' is extrapolated for each player to full 16-game seasons. 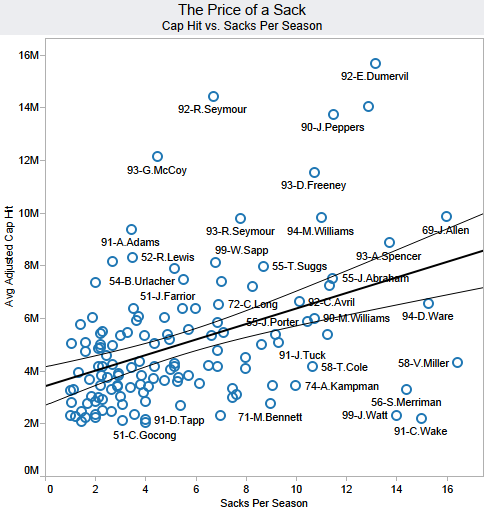 A regression line minimizes variance, but doesn't quite tell the whole story. It seems that teams are paying for sacks at a steeper rate than the trend line shows. A lot of that is likely due to the presence of low-cost rookie contracts in the data, but there is probably either a degree of over-certainty or Gladiator-effect justification for the larger contract values.

One thing to keep in mind is that sack production correlates with other measures of production. The meanest pass rushers are also getting pressures, hits, and probably stopping runs somewhat in proportion to their sack totals. Sack totals can be considered proxies for other, more complete measures of effectiveness.

If we break things out by position, we get similar results. DTs don't tend to have as many sacks as DEs and edge rushing OLBs, so they get more money per sack. The job description of a LB is a bit longer than DTs and DEs, so they aren't valued as much for their sacks as their linemen counterparts. 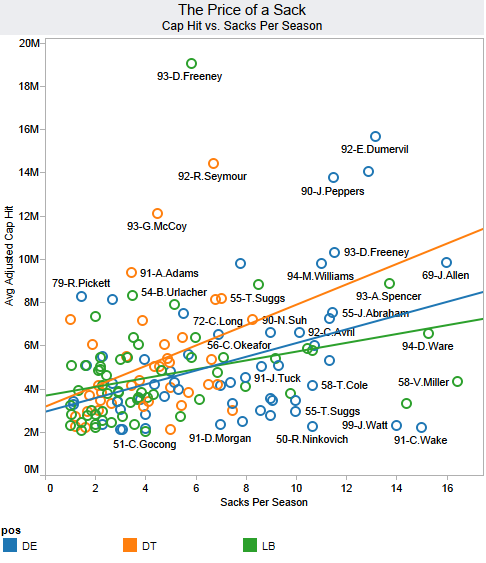 You'll notice some players appear under multiple positions. For example, Dwight Freeney was reclassified as an OLB this past season when the Colts changed to a 3-4. His DE data point is blue and his OLB data point is quite an outlier. Guys who are toward the top left are the most overpaid per sack, while guys on the bottom right are sack bargains.

But that's not what this post is about. It's just getting an idea for the marginal price of an expected sack. So if we look at Elvis Dumervil's recent contract (chosen solely because he pops out in the top-right of the plot) with BAL that averages $5.2M cap hit per season, we can make a back of the envelope evaluation of the deal. Dumervil has notched 63.5 sacks in 91 career games for an average of 11.1 sacks per 16-game season. That would be worth:

At age 29, it would be natural to expect Dumervil's sacks to regress as he ages. By virtue of sacks alone, his current contract says BAL expects 6.1 sacks per season over the 5-year term of the contract. In the first two years of the contract, which are the two most likely to be fulfilled, Dumervil's cap hit including dead money totals $13M (averaged to $6.5M/yr). This puts his per year estimate just under the $6.7M estimated above.

As mufch as an over-over-simplification as this exercise is, maybe it's not too far from reality.