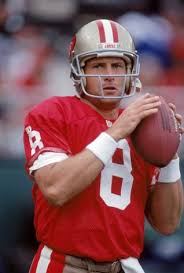 Who's a greater Hall of Famer, Steve Young or Ray Lewis? That was a question my buddy asked the other day. Setting aside the fact that Ray is at least three years away from induction, it raises some relevant points, especially pertaining to the current debate over the league MVP. I said to my buddy that Young had Jerry Rice and other great players around him which made him look good. His counterpoint was that Lewis had great players around him too, which is true. This is what modelers would call interaction effects. In corporate-speak it's called synergy. The military would call it a force-multiplier. In plain language it just means 'greater than the sum of their parts.'

Of course, a player's position is integral to his value. Young was a quarterback, a singularly unique and critical position, and Lewis was an inside linebacker, a central but not vital position. In a debate over an award like MVP, quarterbacks will almost always come out on top if we strictly define value as something akin to Win Probability Added. Modern quarterbacks are so pivotal to team success that no player at any other position can have a bigger impact on a team's fortunes than whoever the top QB happens to be. But there's another consideration to the question of value, one that makes the way we apportion credit to offensive and defensive players systematically different.

There are positive and negative interaction effects among players on both sides of the ball. For example, a good QB makes his receivers look good, and vice-versa. Similarly, a great receiver can draw attention away from other receivers, making them look better. Game theory says that other WRs and even RBs would benefit from other great players on their squad. If a defense must focus attention on one player, that means there is less attention on others. But at the same time, a great receiver takes opportunities away from other contributors, which would be a negative interaction.

For example, when a pair of players like Rice and Young operate together, the interaction effect is positive. On an abstract scale of 1 to 10, say Rice is a 10 and Young is a 10. When they're playing together you don't get 20 but you get 25. That's a positive interaction and is known as a complement.

Rice's best year may have been 1995, when he was paired with J.J. Stokes as the 49ers WR tandem. Say Rice was a 10 and Stokes was a 5. The total production from the 29ers WR corps may have been only 14 rather than 15, because so many targets went to Rice and Stokes could not bring his full contribution to bear. That would be a negative interaction and is known as a substitute. In other words, catches by Rice substituted for what might otherwise be catches by Stokes. This may or may not be exactly how things work, but it's almost certainly true of how we perceive these players' contributions.

On defense, things get even murkier. Ray Lewis played next to Bart Scott for a number of years. Scott's no Hall of Famer, but he was a pro-Bowl caliber inside linebacker.  Say Lewis was a 10 and Scott was an 8. In reality there was likely a net positive interaction effect so that the total effect of the duo was more than 18. But how we apportion credit on defense is zero sum. Every stop Lewis made was a stop unavailable to Scott, and vice versa.

However game theory certainly applies to defense too. The more an offense has to worry about one defender, the less attention it can put on another. If one defender makes a key stop, it creates an opportunity for an assisted tackle. But the interaction effect is not quite the same as on offense. Defenders are not throwing tackles to one another. Unlike defenders, both the passer and receiver receive full credit for every yard and touchdown they help make.

Player interaction on both sides of the ball is a complex swirl of interactions, both positive and negative. But it appears that the net interaction effect between two great defenders would not be as large as it would be for offensive players. It might actually be negative, meaning that great defenders are substitutes. To be clear, that would not mean that having two great defenders on a team hurts a defense. It only means that the total impact of each players is somewhat muted--It's positive, but slightly less positive than the sum of their individual parts.

So it's no wonder that fans eyes are fixed on offensive skill players. The feats of the best offensive players appear multiplied and amplified when great players play together. When a defender makes a comparably great play, it appears as if he did it on his own. He and the rest of his squad trots off the field, and vanish from the screen, until his opponent's next possession.