Can We Miss It? Yes We Can.

In Week 11, there were two missed extra points. This week, there were three more. For an event that converts 99.7% of the time, just how rare is this occurrence?

Since 2000, including botched snaps and blocks, there have been three missed extra points in just 12 weeks and four missed extra points just once (Week 12, 2002). There are an average of 74.6 extra points attempted in a 16-game week. Here are the odds of missing any number of XP given 75 attempts in a week using a binomial distribution: 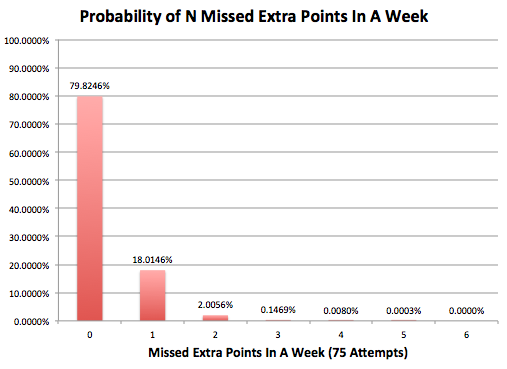 There is no real strategy analysis to go along with this trend, as in all likelihood, it's not a trend, rather random variation. In fact, in 2002, from weeks 9 through 16, there were 15 missed extra points in 498 attempts (97.0% conversion). The extra point conversion rate was lower back then, so if we use 99.2% as the threshold, that is still just a 0.0017% chance of occurring over that span.