Should You Kick a FG on 3rd Down? 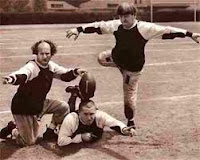 With the game on the line, coaches are fond of attempting a FG on 3rd down in case of a bobbled snap. The rationale is that in case of a bad or bobbled snap, the holder can fall on the ball and the kick can be reattempted 8 yards deeper. Maybe that made sense in 1974, but I'm pretty sure it's a bad idea now.

Unless you're inside the 10 kicking on 3rd down isn't a good idea. Even a gain of 1 yd improves FG prob more than the chance of a bad snap.
— Brian Burke (@Adv_NFL_Stats) December 2, 2013


Admittedly, I wrote that just based on my familiarity with the relevant numbers, so I thought I'd do the legwork. FG% improves with every yard closer a team gets. Every yard matters. In fact, every yards matters to the tune of 1.6% per yard when the line of scrimmage is between the 35-yard line and the 10-yard line. Yesterday, Keith looked at this kind of situation in the context of the CHI-MIN game, and his results suggest the same conclusion. This post will examine play outcomes on 3rd down when the game is on the line and teams are in deep FG (attempt) range, and compare them to the likelihood of a bad snap or hold.

Run plays average 4.3 yards, and pass plays average 6.3 when a team is down by 0 through 3 points in the final 3 minutes of a game and their field position is between the 35 and 25. (Those seem long to me, too--but the averages are 3.8 for runs and 4.6 for pass plays in situations under 1 minute to play.)  But averages aren't everything--here are the distributions:

We also need to consider turnovers, which would typically be fatal or near-fatal. But there's not much to consider. In the last 13 seasons, there has never been a fumble lost on a 3rd down prior to a make-or-break long FG attempt, and there have only been 3 interceptions. Those 3 interceptions have come on 173 pass plays, for a 1.7% rate. Offenses are wisely protecting the ball.

What about bad snaps and holds? Unfortunately those aren't official league statistics. So how can we estimate their likelihoods? Well, extra points don't get any easier as a matter of a kicking exercise, so let's proffer that every single missed XP is the result of a bad snap or hold. Even if we do that, does the risk of a bad snap/hold outweigh the benefit of the potential yardage gain?

Even with the most conservative of assumptions, a conventional play on 3rd down, on average, improves the chances of winning by at least 8 times greater than the risk of a bad snap or hold.

Inside the 10 yard line, things change

But what about the value of peace of mind to the snapper and holder, as @dmv726 pointed out on Twitter? I don't think there's much to that, based on what I've learned over the years. It's equally likely players focus even more is such situations. But the real evidence is that FG attempts are no less successful in clutch situations, so it's extremely unlikely snaps and holds are adversely affected by pressure. Run

Run a play on 3rd down and gain some yards. "Field goal range" is a myth. Closer is better, and the risks aren't big enough to make the difference.