Leaving Free WP all over the Field 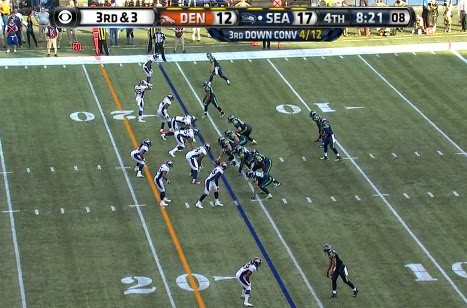 If you were a coach, would you voluntarily give up a down at some point in the game, just to be sporting? Ehh, let's just make it 3rd and 5 instead of 2nd and 5. Of course not. For a random play in the 2nd quarter, that would cost you about 0.02 WP (2% chance of winning) for no reason.

So why do NFL coaches voluntarily leave WP out on the field?

Take yesterday's DEN-SEA game as an example. SEA was ahead 17-12 in the 4th quarter, and had the ball deep in their own territory with about 9 minutes to play. With the game clock running, they snapped the ball with: 8, 5, 5, 8, and 10 seconds left on the play clock. That's a total of 36 seconds. Plus, there was a play in which the receiver could have just as easily remained in bounds. Because there was more than 5 minutes left in the game and the clock restarts after the ball is set, that may have only cost 10-15 seconds of play clock rather than up to 40 seconds. To be fair let's say there was a total of 46 seconds SEA could have burned off the clock during their second to last drive with almost no effort or risk.

Except for particular situations, it's always better to have less time on the clock when you have the lead. The exceptions are when the game is within one score and the opponent has the ball within reasonable scoring distance--near FG range when within 3, around the red zone when within a TD. Otherwise, it's pretty simple. When you have a lead, the less time on the clock the better.

In this case the difference between giving DEN the ball with 5:21 left and 6:07 left is small in terms of WP--about 1%. But why give away all that free time and WP? As I wrote last week, coaches stay up all night long looking for that last 1% edge. Don't squander it.

Certainly an offense can't squeeze every last second off the clock, but it's reasonable to let the play clock wind down to a couple seconds before snapping. Every second helps, even if just a tiny amount.

As the game turned out, after a SEA field goal, DEN managed to tie the game with a TD and two-point conversion on a drive that started with only 59 seconds to play. I'm sure SEA would have preferred that DEN only had 15 seconds left to try to tie on that drive. Although that's an unfair way to think of it because we don't know how the game would have unfolded had there been less time on the clock, it illustrates how tiny differences can sometimes add up to make a decisive difference.