- Along with the Cardinals, the Philadelphia Eagles are the team that has elicited most confusion from readers over the past two weeks.  The Eagles were on the verge of rising out of the 20s, but a loss to Arizona sent them back down to 23rd (though still ahead of the NFC West leaders).

Quite frankly, the model sees very little that is exciting about the Eagles.  They are essentially league-average in nearly every category so far, though the running game is likely going to speed past that as the offensive line returns to health.

Still, if nothing else improves, it would be difficult to envision the Eagles winning the NFC East, with a non-playoff season a distinct possibility.  Though the league's best ground game powered Philly last season, they also possessed the fifth-ranked passing game by EPA/P, as well as the sixth-ranked run defense by that metric.

The Eagles have essentially been kept afloat by special teams and defensive touchdowns, as their seven return TDs equal the rest of the league's combined total.  That's hardly a sustainable formula, of course, and with Philly ranking last in turnovers per drive, the offense is often squandering the solid field position generated by the return game.  Without improved play from Nick Foles or a greater volume of defensive turnovers, the Eagles' record will likely experience an ongoing correction.


- The New Orleans Saints may be a disappointing 3-4, but with the league's second highest rushing offense success rate, there is reason to believe a turnaround is already underway.  No longer solely reliant on Drew Brees, the offense is now capable of controlling games, if utilized correctly.

Unfortunately, the Saints are running the ball on just 46.6 percent of their first down plays.  Most of those teams with that kind of imbalance are ones playing from behind frequently, like Oakland, Tampa Bay, Jacksonville, etc.  New Orleans is not in that situation, though, and given that every one of their running backs is producing at or near a career-best level, it is clear the running game is being underutilized: 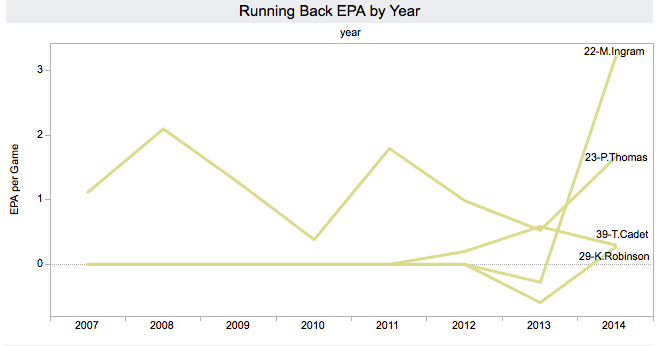 That number has remained constant in the red zone, where the Saints are running on 46.7 percent of their plays, which is roughly a league-average percentage.  However, as an article I'll post soon will likely show, it is far more profitable to run the ball in that constricted area of the field, particularly near the goal line.

Ultimately, New Orleans would be wise to take a page out of the Dallas Cowboys' playbook and feed their backs to take pressure of an aging quarterback.  Dallas' commitment to the run game has yielded the fourth-ranked offense by efficiency, and though the Saints do not have a DeMarco Murray in their backfield, the aforementioned quartet would seem capable of helping New Orleans overcome some of the late-game collapses that have plagued them in 2014.


- If this model did not diminish the impact of turnovers, the New York Jets would likely have the worst offense by efficiency.  The Jets rank last in passing efficiency, and rank in the bottom three for EPA/P, WPA and success rate.  With a league-worst minus-1.9 turnover margin per game, the Jets are the epitome of self-mutilation.

However, it is also worth noting that the Jets have faced one of the league's most difficult schedules for their offense.  Over the past five weeks, New York has not faced a pass defense outside of the top 12 in pass defense.  That stretch has included games against three of the top five pass defenses in efficiency—Denver, Detroit and Buffalo.

Make no mistake, the Jets have a horrendous quarterback situation that will likely be rectified in the draft next spring.  However, as the schedule softens, there is reason to believe that New York could pile up a few wins in the season's second half, assuming they don't try to go in the tank for Marcus Mariota or Jameis Winston.


Here are the updated team efficiency rankings after eight weeks.  As always, observations, questions and snide remarks are welcome in the comments section.