A pair of AFC Wild Card contenders were the biggest movers from Week 7.


- The Buffalo Bills rose seven spots in the rankings and have cracked the top half for the first time this season.  At 5-3, the Bills figure to stay in the thick of the playoff race late into the season for the first time since 2004, when a Week 17 loss to the Steelers' backups wrecked their postseason hopes.

Though Buffalo has had issues drafting quarterbacks since Jim Kelly's retirement, the Bills have hit on a steady stream of defensive draft picks in recent seasons.  Coupled with smart value free-agent signings like Jerry Hughes and Corey Graham, Buffalo has constructed one of the league's most well-rounded defenses.  At third overall in the efficiency rankings, the Bills defense ranks third against the run and fifth against the pass, the only team besides the Broncos and Dolphins to crack the top 10 of both categories.

A 4.0 interception rate, second-highest in the league, has certainly aided the defense.  The turnovers might dry up, since not every team employs Geno Smith and Michael Vick at quarterback.  Even so, the Bills have been remarkably consistent in their dominance from week to week, apart from a couple blips against the most elite offenses: 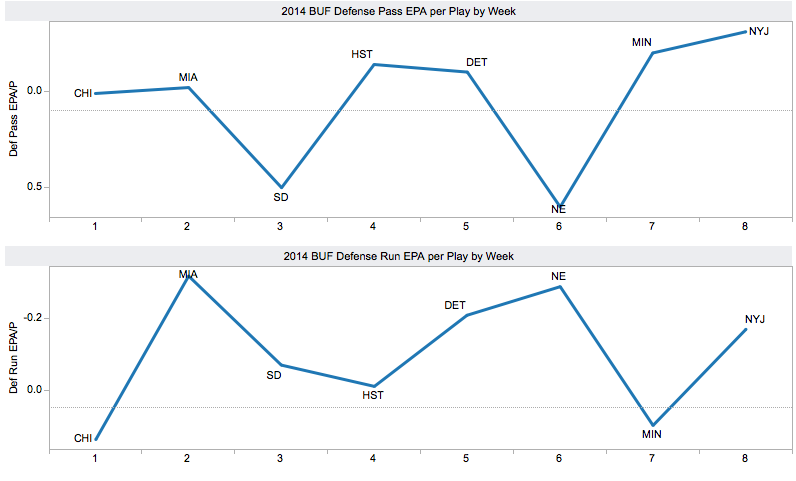 Those woes against San Diego and New England might be instructive, as both teams possess terrific tight ends (Rob Gronkowski, Antonio Gates) and big-bodied outside receivers (Malcolm Floyd, Brandon LaFell) who took advantage of the Bills' lack of size in the secondary.  But the Bills did contain a similarly constructed team in the Bears, so pinpointing that as a clear weakness might be too far a jump.

Buffalo's viability as a playoff contender will come down to its offense, which is hardly a secure proposition.  With both Fred Jackson and C.J. Spiller out for the foreseeable future, it is hard to pinpoint what exactly this offense does well.  Sammy Watkins has emerged as the leading candidate for offensive rookie of the year, but that alone is hardly sufficient to keep the Bills offense afloat, as their 27th-ranked overall offensive efficiency mark illustrates.

With offense, particularly passing offense, increasingly emphasized as a crucial ingredient of success, it is becoming more difficult to find teams like the Bills from the recent past who reached the playoffs.  On the season, Kyle Orton has posted a net yards per attempt (NY/A) mark of 6.5, while the running game has averaged 3.8 yards per attempt.  Since 2004, when an increased emphasis on illegal contact led to offensive spikes, here are the teams that have made the postseason with that offensive combination, per Pro-Football-Reference: 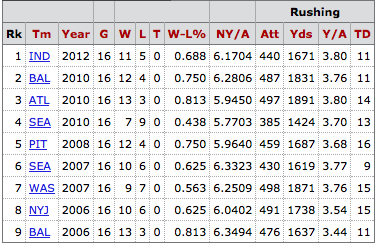 This is not exactly a promising lot.  Most of the teams who fit that criteria were concentrated on the early end of the timeline, and, on average, the nine teams outperformed their Pythagorean win expectancy by 1.1 wins.  Every squad besides the 2007 Seahawks overachieved based on Pythagorean metrics.  Essentially, to make the playoffs with this combination, you need luck, either through in-game circumstances (2012 Colts, 2010 Falcons) or through poor division competition (2010 Seahawks).

The Bills might need to fall into the former circumstance.  The Patriots appear likely to win the AFC East—Football Outsiders estimates New England's chances of winning the division at 55.5 percent—and FO also rates Buffalo's remaining schedule as the sixth-hardest in the league.  The Bills were fortunate to escape last Sunday over the Vikings, and Buffalo may need more late-game magic to emerge from a crowded field of AFC wild card contenders, even with their elite defense.


- One of Buffalo's primary competitors could be the San Diego Chargers, who fell six spots after their second loss in four days.  However, though these rankings portray the Chargers as a mediocre team, there are reasons to believe in a turnaround.

Most obviously, these rankings do not account for injuries, or the prospect that a team will eventually get injured starters back.  I'm working on a injury compilation project with FO, and though the Adjusted Games Lost metric is not out yet, I can say with confidence that the Chargers will be near the top of those rankings.  At some point, the likes of Melvin Ingram, Ryan Mathews, Mant'i Teo, Jason Verrett and Brandon Flowers will return, restoring much needed stability to the lineup.

You'll notice that most of those players are defenders, and indeed, San Diego has suffered on that side of the ball.  While the Chargers have been consistent on a per-play basis, conceding roughly 5.5 yards per play over the first and second month, they hemorrhaged a rash of big scoring plays.  Touchdowns against the Chargers over the past month have gone for an average of 18.4 yards per play, eighth-highest in the league.  Over the first month, that mark was 11.1 yards, 11th-lowest in the league.

Assuming reasonable defensive health the rest of the season, it seems extremely unlikely that the Chargers will play their way out of the postseason. San Diego is essentially the anti-Buffalo, in that it is extremely difficult to fathom the Chargers missing the postseason with this high a level of quarterback play.  Other than Peyton Manning, one could make a legitimate argument that Philip Rivers has been the best quarterback in the league over the past two seasons: 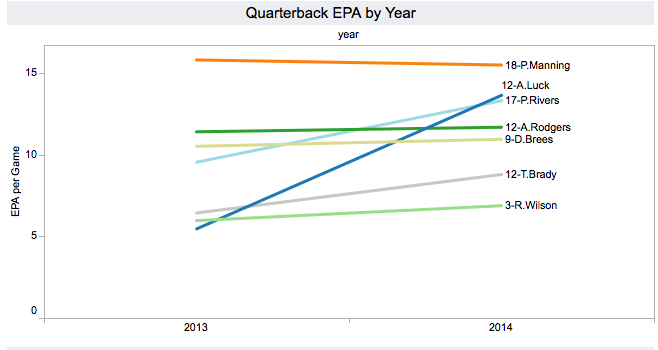 This year, Rivers ranks second in EPA/P, seventh in success rate, fourth in WPA/G and third in adjusted yards per attempt.  In short, despite the league's worst running game and third-worst run defense by success rate, Rivers' brilliance can keep the Chargers above water during the regular season (perhaps all by itself).

At the moment, Rivers' ANY/A index is 125, meaning that his adjusted net yards per attempt mark of 8.8 is 25 percent better than league average.  Of quarterbacks to post that ANY/A+ and start all 16 games, none have ever missed the playoffs.  In fact, according to Pro-Football-Reference, just three of those quarterbacks have even led their team to 10 or fewer wins:

The Broncos are probably too far away to catch, as the Chargers are already two games back in the loss column and have a loss in hand against Denver.  But in a relatively mediocre AFC, it would be difficult to envision the Chargers winning anything less than 10 or 11 games, barring a persistence of the injury bug.