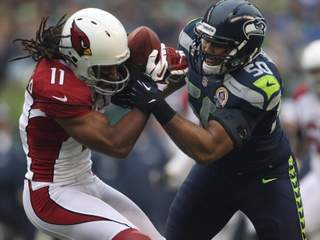 Halfway through the seasons, the standings should seemingly provide us with at least semi-reliable information.  Sure, a team's record over seven to eight games is still prone to some misleading variance, but with almost half the season gone, we might be tempted to suggest that any corrections going forward will be minor.

Of course, that is not the case, and in some instances, this model suggests some very jarring changes are in store for the second half.  While this model is not perfect in its predictive power, it was ahead of the curve on a few second-half changes that occurred in 2013.  For instance, at this time last season, the model was optimistic on the 3-5 Eagles and pessimistic on the 8-0 Chiefs.  Philly would lose just one game the rest of the regular season, while Kansas City effectively backed into the postseason on the strength of their first half before flaming out in a historic collapse.
In trying to identify a similar trend for 2014, we need to look only to the NFC West, where a team experiencing its worst on- and off-field turmoil in years remains in the top 10, while one of the season's feel-good stories remains mired near the bottom.  This model is not omniscient, so should these unusual rankings hold much weight?

Should we believe what the standings tell us in the NFC West?


- Buying stock in the defending champions is usually a wise idea, but the Seattle Seahawks are currently testing that theory.  Though the Super Bowl hangover is usually associated with the losing team, the 4-3 Seahawks are clearly no longer the same juggernaut that ravaged the league last season.

We can list some obvious reasons for Seattle's regression.  When the bill came due for Richard Sherman, Earl Thomas and Michael Bennett, valuable starters and role players like Golden Tate, Chris Clemons, Red Bryant, Walter Thurmond and Clinton McDonald no longer fit within their salary cap constraints.  That has manifested itself in deleterious ways—not only is the drop-off larger when injuries force the likes of Ricardo Lockette and O'Brien Schofield into significant roles, but returning starters like Cliff Avril and Bennett have suffered under increased workloads, as the Seahawks can no longer afford to liberally rotate in their substitutes.

The Seahawks have also seen cracks in their locker room foundation, with well-documented off-field issues emerging over the past week.  This site isn't really the forum for that discussion, so we'll leave that alone.  I'll say this, though—these shady rumors only emerge in times of losing.  When Percy Harvin allegedly body slammed Tate before the Super Bowl last year, why didn't the Seahawks collapse in that game amid supposedly incurable internal strife?

Even with these woes, the Seahawks still sit seventh overall in these rankings.  That might be a bit misleading, as wins over the increasingly dominant Broncos and fourth-ranked Packers have boosted an otherwise mediocre season.  Nevertheless, that still leaves Seattle as the top-ranked team in an extremely competitive division.

In examining evidence for support, we can start with the Seahawks' running game, which remains fourth in success rate despite a few quiet weeks from Marshawn Lynch.  Having Russell Wilson at quarterback obviously helps that.  According to Football Outsiders' DYAR metric, Wilson has produced roughly three times more rushing value than any other quarterback this season.  This is nothing new, for Wilson has accrued the most 100-yard rushing games of any quarterback over the past five seasons.

However, everything else indicates that the Seahawks are what their record implies—a slightly above-average team.  Wilson himself has generated more polarizing opinions about his development as a passer, but the numbers suggest that he has essentially been the same player he was in 2013.  The only exceptions are an uptick in Win Probability Added (WPA) and a steep decline in deep-ball attempts:

That would be perfectly fine, except that the Seahawks' defense has regressed significantly.  After finishing first in defensive Expected Points added per play (EPA/P) and total WPA last year, Seattle now ranks 14th and 22nd in those two categories, respectively.  Much of the discourse on this year's team surrounds Wilson, but in reality, it is the defense that has provided him with much less margin for error.

The much-ballyhooed Legion of Boom has particularly taken a big step back.  Injuries have created rotating doors at right and slot cornerback, leading to a 46.9 percent pass defense success rate that ranks fourth-worst in the league, one slot behind Oakland (!).  Seattle's pass defense has played an excellent game against Green Bay, three solid quarters against Denver and one terrific game against a Carolina team with arguably the worst wide receiver corps in the league.  Apart from that, ugliness:

The trio of Byron Maxwell, Jeremy Lane and Tharold Simon will most likely be healthy at the same time later this season, so the Seahawks should stop resembling a pass defense that employs Tarell Brown and Chimdi Chekwa.  The Seahawks may very well be a borderline top-10 pass defense from this week on, but the total pass-rushing dearth likely places a glass ceiling on the defense's overall upside.

The offensive personnel isn't really going to change much, meaning that the Seahawks are likely in the same position as the archrival 49ers.  Both teams possess too much high-end talent to totally collapse, but they have also overloaded their growing young quarterbacks and suffered through defensive depth issues, leaving them vulnerable to missing the playoffs with a few bad breaks.


- With the Seahawks and Niners in flux, the Arizona Cardinals would seemingly be perched in the penthouse this season.  The Cards are already two games up on both teams in the loss column, and with Carson Palmer back at full health, it would seem as though Arizona has already weathered the worst part of their season.

However, these rankings have Arizona at just 25th overall, despite their shiny 6-1 record.  Though no other advanced metric is nearly as pessimistic on the Cardinals as AFA, there seems to be a consensus that the Cardinals' record might be misleading.  Entering Week 8, Football Outsiders had Arizona just 15th overall in DVOA.  FiveThirtyEight's Elo ratings disagreed, ranking the Cardinals eighth, though unlike this model or DVOA, Elo does take last season into account.

Those ratings were pre-Week 8, so we'll see how they update later this week.  Following their win over the Eagles, the Cardinals' Pythagorean win expectancy still sits at just 4.2, meaning their point differential suggests that their 6-1 record is quite fortunate.  But even that might be misleading, for just two of Arizona's six wins have been by seven points or less, and their point differential is weighed down by a 41-20 loss at Denver.  Considering that the Cardinals played most of that game with extremely raw rookie quarterback Logan Thomas, it almost seems fair to exclude that.

These all-encompassing attempts to rank the Cardinals only serve to confound.  Breaking things down by the table stats below, we see that Arizona possesses a league-average passing offense, the second-worst run offense by success rate, a top 10 run defense and bottom 10 passing defense.  This hardly seems like the formula for a 6-1 team.

There is some evidence to support Arizona.  That low pass defense ranking seems confusing, and in reality, the Cardinals' pass defense has been mostly excellent.  the Cardinals possess the league's most versatile safety corps, while the cornerback trio of Patrick Peterson, Antonio Cromartie and Jerraud Powers has provided reliable coverage behind Arizona's pressure schemes.  In reality, two outliers against San Francisco and Denver are acting as anchors to drag the numbers down:

It is also probably misleading to label Arizona's passing game as league-average.  Left for dead after a 25-game debacle of a stint with the Raiders, Palmer's late-career revival under Bruce Arians has continued into 2014.  The 34-year-old ranks ninth in EPA/P and fourth in adjusted yards per attempt.  Most shockingly, the once turnover-happy Palmer has posted a miniscule 0.6 percent interception rate this season, lowest in the league among quarterbacks with at least four starts.

Of course, that last number might actually be ominous, as Arizona is benefiting from every conceivable turnover advantage.  The Cardinals rank fourth in defensive interception rate and, of course, first in offensive interception rate.  Additionally, the Cardinals have the fifth-highest fumble recovery percentage in the league.  These are all statistically fluky trends prone to variation, and based on success rate, AFA actually sees the Cardinals and Jaguars as similar teams: 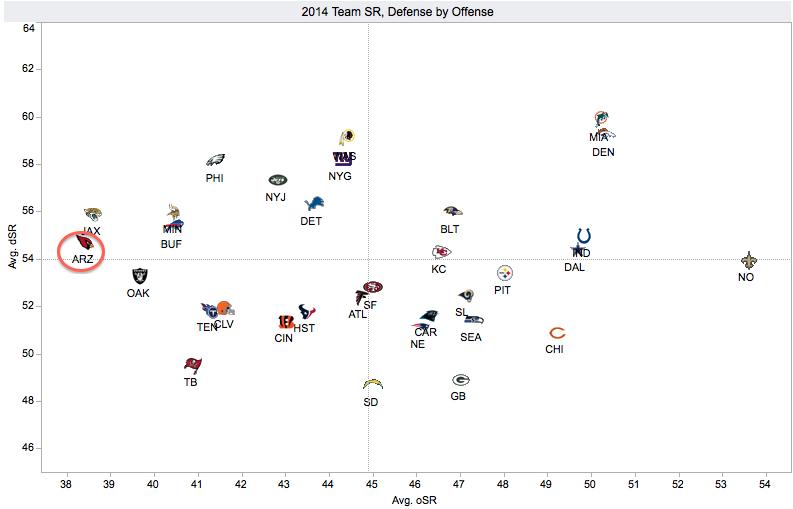 Still, no amount of regression is going to take away the six wins the Cards have already banked. Moreover, with wonderfully fearless defensive coordinator Tood Bowles at the helm, Arizona's relentless pressure scheme seems more conducive to maintaining an unusually high turnover rate.  A year after ranking sixth in takeaways per game, the Cardinals now rank third.

It's hard to find much evidence that screams regression for Arizona, even if you want to assume that they won't enjoy such fortuitous turnover luck moving forward.  The overall ranking should improve if the pass defense and Palmer continue to pull the overall numbers up, as the outliers still hold a lot of weight in just a seven-game sample.  At this point, I have to disagree with the model's conception of the NFC West, and I'd be interested to hear your arguments in the comments.