- Other than the Dolphins' ranking, perhaps the most curious takeaway from this week's ranking is seeing Washington with the third-ranked passing efficiency.  Considering that they are already on their third quarterback, and likely to take a new one at the top of the draft this spring, it is clear that something does not quite add up.

In actuality, the trio of Robert Griffin III, Kirk Cousins and Colt McCoy has posted some impressive per-play numbers.  Washington as a team ranks third in net yards per pass attempt, behind only the prolific Denver-San Diego duo.  However, Washington ranks out as a below-average pass offense in terms of EPA, despite those lofty yardage totals: 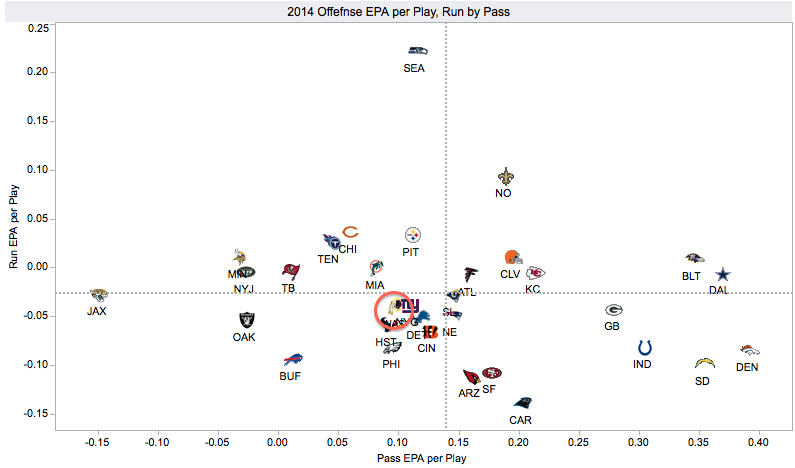 Of course, turnovers have doomed the position, as Washington quarterbacks are on pace for 27.4 turnovers this season.  For perspective, only Eli Manning and Joe Flacco exceeded that number last season.  These efficiency rankings give less weight to turnovers, since they are flukier and do not always hold significant predictive value.  However, given the histories of the Washington quarterbacks, turnovers represent the main reason why the organization will likely have its 17th different starting quarterback since 2000 next season.


- The Minnesota Vikings are the new owners of the ignominious 32nd-ranked overall offense.  Poor Teddy Bridgewater has been under constant duress, and as such, the Vikings have posted the second-least efficient passing game.  Without Adrian Peterson, Minnesota's league-average run success rate is no longer enough to keep the Vikings afloat.

Bridgewater has shown flashes at times, though most of those came at the expense of the 32nd-ranked Atlanta defense three weeks ago.  In seeing Bridgewater take a pummeling every week, it is difficult not to have flashbacks to David Carr, who was famously scarred by a league-record 76 sacks in 2002.

It's obviously far too soon to speculate about any long-term ramifications for Minnesota's first-rounder, but there is also legitimate reason for concern.  Bridgewater's 62 sack percentage index ranks second-worst among all quarterbacks with at least three starts this season, ahead of only Chad Henne.  If sustained over the entire season, that would represent the fourth-worst mark of since 2002.

It's hard to ascribe causative to sack percentage index and eventual success.  Yes, rookies with the worst sack percentage indices generally flamed out, but that often stemmed from a glaring lack of pocket presence (see Gabbert, Blaine).  Joey Harrington and Brandon Weeden enjoyed significantly better protection than Ben Roethlisberger or Russell Wilson, but that never translated into superior careers.

Thus, it's too simplistic to suggest that Bridgewater will fail simply because he is likely to continue taking beatings behind Minnesota's shoddy offensive line.  But if Vikings cannot to improve to a merely below-average pass-blocking team, rather than a historically inept one, it might be best to preserve Minnesota's first-round investment at some point.


- Most fans are familiar with the devaluation of the running back, so unsurprisingly, run defense is also becoming increasingly overrated.  Of the top 10 teams in run defense success rate, only half have cracked the top-15 overall rankings.  Conversely, nine of the top-10 pass offense units and all of the top-10 pass defenses sit in this week's top 15.

Of those top-10 run defenses, only four also possess above-average pass defenses.  As mentioned earlier, only the Dolphins are top 10 in both, likely accounting for their unexpected place as the second-ranked team.

It's hardly surprising that run defense shows a lower correlation with winning.  Interestingly, though, offenses are on pace to run 2,449 rushing plays in the red zone this season, which would indicate an uptick back towards what the seasonal rates were in the mid-2000s: 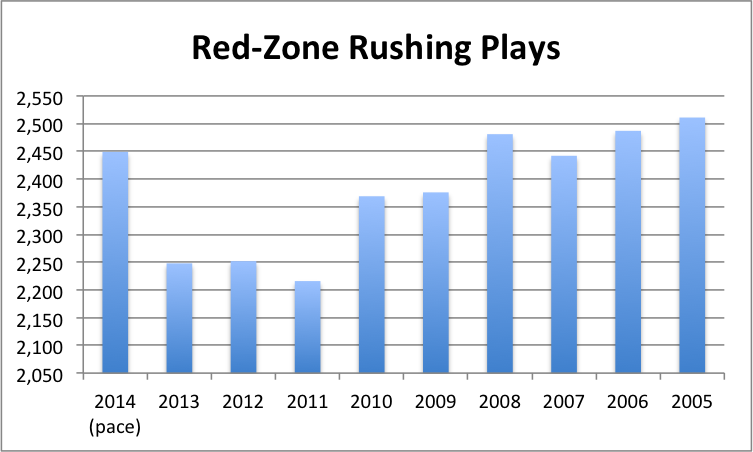 There's no doubt that passing has far surpassed rushing as the more efficient form of offense, but if passing games are more reliant on space, as discussed earlier, then perhaps the constricted area of the red zone could represent the safe haven that preserves the value of the running game.  This isn't a new problem; Brian has done research suggesting that running is more efficient inside the 10-yard line, and that teams are not calling enough red-zone runs.

That was four years ago, though, and passing schemes have taken some important leaps forward since then.  My intuition would be that Brian's numbers are still likely reflective of reality, but the research might be worth updating to see if passing progress has closed the gap on the "three yards and a cloud of dust" mantra.


Here are the updated team efficiency rankings after seven weeks.  As always, observations, questions and snide remarks are welcome in the comments section.