One game this week may have revealed much about the AFC hierarchy.


- Apart from drafting Andrew Luck, the Indianapolis Colts have not found many keepers in building their roster over the past three years.  The ill-fated Trent Richardson trade came after a series of long-term contracts for marginal veteran free-agents, which has hamstrung the roster with oodles of non-damaging but relatively mediocre talent.  After an 0-2 start, some wondered if the Colts were even AFC South favorites anymore.

Since then, the Colts have ripped off five straight wins and now possess the second-best point differential in the league.  Two of those victories came over JV punching bags Jacksonville and Tennessee, but the Colts also posted a pair of impressive wins over fellow AFC contenders Baltimore and Cincinnati.  Their dominance over the previously second-ranked Bengals propelled Indy all the way up to third in these rankings, a 12-spot jump that made them this week's biggest riser.

These rankings have typically hated the Colts because of their reliance on close-game luck (no pun intended).  Indy is just 1-2 in one-possession games this season, but they had gone 14-2 in those games over Luck's first two seasons.  That was the second-best two-year stretch in NFL history, topped only by Luck's Indianapolis predecessor from 2008-09.

However, the Colts' 2014 claim to legitimacy rests not solely on Luck's right arm, but also a defense that is puzzlingly ranked seventh in overall efficiency.  The Colts mostly preserved the same 2013 defense that finished 16th in DVOA, except that they lost an All-Pro season from Robert Mathis and replaced the uninspiring middle linebacker platoon of Pat Angerer and Kelvin Sheppard with the uninspiring middle linebacker platoon of D'Qwell Jackson and Josh McNary.

And yet, this motley group of defenders has far outperformed expectations, holding three top-half offenses over the past three weeks to just 13.7 points per game.  That's deflated a bit by last week's shutout against the A.J. Green-less Bengals, but we cannot simply dismiss that performance, considering that the Bengals had averaged 6.34 yards per play leading up the game, second-best in the league.

The Colts still possess a below-average run defense with a 57 percent success rate, but their pass defense sits eighth in EPA.  Vontae Davis has finally translated his talent into consistent results, producing 18.2 EPA per game, 10th-most among all cornerbacks.  Free safety Mike Adams, signed off the scrap heap, has also helped stabilize the back end.  Indeed, in terms of EPA/P, the Colts pass defense ranks second only to Detroit's shutdown unit: 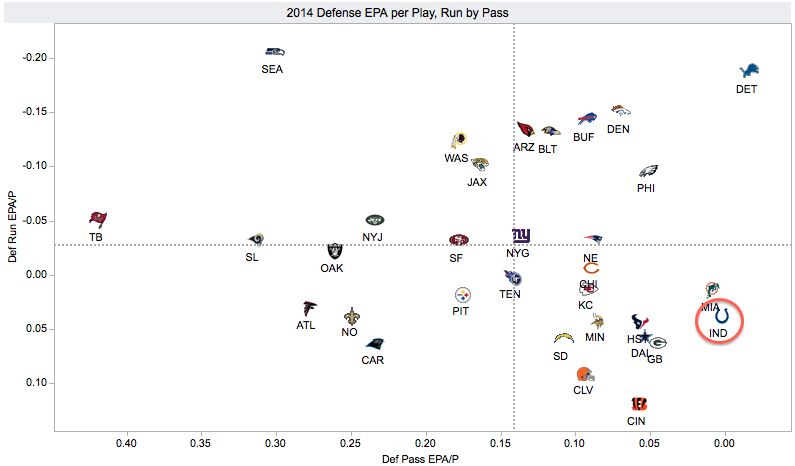 Indianapolis figures to remain at those lofty heights the rest of the season.  The Colts face five top-half passing attacks over their final nine games, but two of those are the Browns and Washington, neither of whom possess confidence-inspiring quarterbacks.  Playing in the putrid AFC South, the Colts will likely be the first team to clinch a playoff spot.  However, apart from a couple showcase games against New England and Dallas, there really won't be many opportunities to confirm this defense's legitimacy until the postseason.


- After emerging as the top-ranked team for the first month, the Cincinnati Bengals have since plummeted over the past three weeks.  Cincy represents the other side of the coin from Indy's thorough beating, as the Bengals nosedived from second to 12th place, easily this week's biggest drop.

Though an Andy Dalton-led offense will likely always exhibit plenty of variance, it's the defense that has earned deserved criticism for its sudden regression.  Long one of the league's most consistent and underrated units, the Bengals have allowed 6.0 yards per play over the last three games, eighth-worst in the league.  This comes after allowing 4.9 yards per play in the first three weeks, seventh-best in the league.

It's not really hard to spot the culprit.  A toddler learning shapes and directions for the first time could probably spot something awry with this trend:

There are some encouraging long-term signs even in that ugly decline, believe it or not.  The Bengals per-play pass defense numbers are not as bad as that chart would imply.  They have conceded 6.94 yards per pass attempt during their three-game winless streak, which ranks a below-average but not heinous 19th.  Thus, Cincinnati still ranks sixth overall in pass defense efficiency on the season, a ranking that does not stem entirely from their strong three-game start.

The issue for the Bengals has been poor situational and big-play defense.  Despite that tenable per-play rate, opponents have picked up a first down on 40.2 percent of their pass attempts, fifth-highest in the league over that span.  Most distressingly, the Bengals have just two combined turnovers and sacks in the last three weeks, tied with the Seahawks for the lowest total in that stretch.

Small sample size plays a role in that, but so do a couple key injuries.  Top coverage linebackers Vontaze Burfict and Emmanuel Lamur have missed time, with Burfict's repeated concussion symptoms representing a scary issue that figures to threaten his season.  Burfict's long-term loss would represent a significant reduction in speed, a worrisome proposition given that the Bengals are mostly reliant on plodding technicians at all three levels of the defense.

Apart from Geno Atkins, who has appeared less explosive in his return from ACL surgery, the Bengals defense lacks a definitive playmaker.  Speed is increasingly important as offenses begin to incorporate more spread concepts in an effort to exploit the spaces available in any coverage scheme.  League-wide, passes have gotten shorter as offenses emphasize yards after the catch.

The Bengals pass defense is unlikely to suddenly plummet into Falcons territory, as there is still a meaningful amount of talent and depth here, even without Burfict.  Still, if this is really a league-average overall defense, then Cincy's fortunes will ride on the week-to-week whims of the Dalton-led offense.  For a team that harbored legitimate Super Bowl aspirations after September, that would likely keep the Bengals firmly beneath that first-round glass ceiling they cannot seem to break.