These teams experienced the biggest rise and fall from Week 5.


- The Niners rose seven spots up to fifth place, but we just extensively covered their future outlook last week.  We'll revisit San Francisco in a few weeks, but the 49ers figure to be one of five or six teams jostling for one of a few precious NFC playoff berths.

The Chicago Bears rose five spots, behind San Francisco and Cleveland (six spots) for the largest jump from Week 5.  Despite an important win at the Georgia Dome, the Bears look like a tricky team to pin down, in no small part because of Jay Cutler's week-to-week (or even quarter-to-quarter) inconsistencies.

The narrative on Cutler is well-documented at this point: he's an uber-talented gunslinger with questions about mechanics, consistency and leadership, and thus a questionable leader for a team with Super Bowl aspirations.  This season, the numbers have leaned more towards good Cutler, as he ranks third in success rate and has posted the highest EPA/P of his Chicago tenure.

And yet, the Bears rank as exactly a league-average team in terms of pass efficiency.  The bottom line remains relatively unspectacular, despite Cutler on pace to post career-highs in Adjusted Net Yards per Attempt and completion percentage.  In examining Cutler's splits by half, we can see that that incongruency results from a bizarre trend:

Despite a higher completion percentage, Cutler is also somehow making more mistakes and thus harming Chicago down the stretch.  It's hard to go with the facile "not clutch" narrative, though, for every second-half stinker like Chicago's Week 4 loss to Green Bay, Cutler has catalyzed a brilliant finish, as he did in victories over San Francisco and Atlanta.

It's not particularly instructive to examine the rest of the team, either.  The Bears' defense has stabilized after demonstrating historically poor resistance against the run in 2013, but they still rate out as a roughly league-average unit whose positive impact stems from a 4.0 percent interception rate that ranks fourth-highest in the league.  Matt Forte is producing by far the highest success rate of his career at 46.2 percent.  Only Le'Veon Bell and DeMarco Murray have topped that mark while recording at least as many carries as Forte's 99.

Thus, the cumulative picture would seemingly portray a team that deserves a ranking higher than No. 18.  The formula is not impressed overall with Chicago's defense, ranking them 24th, but the Bears' have conceded just 0.08 EPA/P, which ranks eighth in the league.  Just one of Chicago's six opponents currently rank in the top-10 in terms of overall efficiency, so a low opponent gross winning percentage (GWP) is probably dragging the Bears down.  Nonetheless, it is clear that the addition of impactful rookies (Kyle Fuller, Ego Ferguson) and veteran free agents (Lamarr Houston, Willie Young) will prevent the defense from dragging the Bears out of the playoffs, as they essentially did in 2013.

One solution to Chicago's late-game inconsistencies could simply be to take the ball out of Cutler's hands more often.  The Bears run the ball on just 37.5 percent of their plays, 26th in the league and the lowest of any team with a .500 record or better.  That number has shimmied up to 39 percent in the second half, but that still feels low for a team that has run the fourth-most offensive plays in one-possession second-half situations.

The Bears might be the league's toughest team to grasp at the moment.  The Packers will always have staying power with Aaron Rodgers, and we've already outlined the reasons for Detroit's legitimacy.  Chicago clearly possesses playoff-caliber talent, but as in years past, the numbers just do not seems to add up in their favor.


- On the other end of the spectrum, the New York Giants fell six spots to 22nd overall, tied with the Chargers for the largest drop.  In a surprisingly competent NFC East where the Cowboys and Eagles are 5-1, the G-Men might look like the clear third wheel at the moment.

However, Pro Football Reference's Pythagorean Win Expectancy pegs Dallas, Philly and New York at 3.9, 4.1 and 2.9, respectively.  In other words, PFF sees the Giants as having performed almost exactly to expectations thus far, while the Eagles and Cowboys have both overachieved by a win.

That observation about Philly and Dallas likely does not surprise anyone who has followed either team this season, but the Giants have been a much more erratic bunch whose dizzying week-to-week sways ultimately leave them somewhere in the middle.

Then again, the Giants might be an easy team to decipher.  For the most part, their EPA has correlated almost entirely with opponent strength.  This holds particularly true for the much-ballyhooed new Ben McAdoo offense, which has alternately been hopeless and unstoppable: 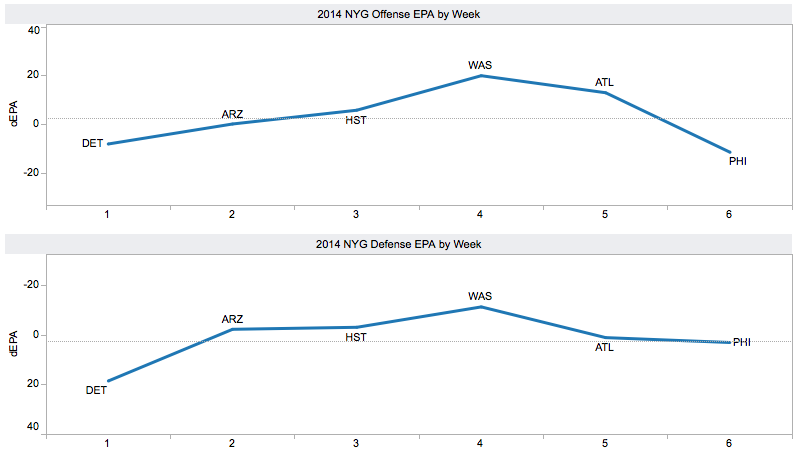 Again, though, it seems too simplistic to suggest that the entire offense simply fluctuates based on opponent strength.  Dissecting things deeper, the Giants have bizarrely received season-best outliers in each of their three victories—Rashad Jennings vs. Houston, Larry Donnell vs. Washington and Odell Beckham, Jr. vs. Atlanta.  Calling Beckham's performance an outlier might be a reach, since he is a rookie who has played just two games, but it doesn't seem like a stretch to suggest that the Giants' 23rd-ranked offensive efficiency would sit even lower if not for those one-time leaps in performance.

With Victor Cruz done for the year, the Giants will probably need to rely on their talented yet inconsistent defense to win them games.  New York stands out as the best run defense in terms of success rate, with Jason Pierre-Paul in particular rebounding from a lost injury-plagued 2013 campaign to restore his status as one of the game's top young defensive ends.

But the secondary, the team's ostensible preseason strength, has fallen well short of expectations.  A season-ending pectoral injury to excellent slot corner Walter Thurmond hasn't helped, while Stevie Brown has regressed mightily, to the point of being benched for Quintin Demps.  Dominique Rodgers-Cromartie has also been in and out of the lineup with nagging injuries, though Prince Amukamura's breakthrough has helped offset DRC's absence.

Either way, we'll get a much better idea of if the Giants defense can carry the Cruz-less offense.  Four of New York's next five opponents currently rank in the top 10 in overall offensive efficiency.  The 49ers are the one exception, but they rank 10th in passing efficiency.  The Giants have gotten by against a relatively weak schedule with a few spectacular performances, but Cruz's injury is a reminder that they will need to establish a more permanent foundation to keep up with Dallas and Philadelphia.