The biggest task for any predictive model is to figure out which teams are "for real" before a general consensus catches on.  There will always be some noise in the tiny sample size of an NFL season, especially through six weeks, but at the very least, we are reaching the point when these rankings begin to stabilize.

Unlike the first two renditions of these rankings, there were no big ascents or collapses, with no team moving more than six spots from their Week 5 position.  Thus, it appears the model is moving closer towards answering that question posed in the first sentence.

Still, we are hardly capable of making sweeping conclusions based on that fact alone.  So this week's write-up will start with a dive into two top-10 teams, both of whom are also steadily gaining steam in the national media.

To Believe or Not to Believe?

Do these two teams really belong in the upper-third of the league?


- It almost feels reasonable to doubt the Cleveland Browns based solely on metaphysical reasons.  But whatever bad juju the Browns have accumulated since their 1999 reincarnation has disappeared in this felicitous campaign, as the 3-2 Browns sit eighth in this week's rankings.

It's not hard to identify where the Browns have thrived.  The Johnny Manziel Brian Hoyer-led offense ranks second in overall efficiency, with Hoyer spearheading the fifth-ranked passing game in terms of Expected Points Added (EPA) per play.

That the Browns are doing this without All-World receiver is nothing short of remarkable.  Andrew Hawkins has received love among statheads, but the diminutive slot receiver is flanked by the brittle Miles Austin, punt returner Travis Benjamin and undrafted rookie Taylor Gabriel.  Even Pro Bowl tight end (er, pass catcher) Jordan Cameron has been hampered with a shoulder injury, accruing just nine receptions over four games thus far.

In truth, most of Cleveland's success stems from Hoyer's lack of turnovers.  Though he is middling in terms of success rate and EPA/P, Hoyer ranks third in adjusted yards per attempt (7.3), in part because he has been picked off twice and sacked just seven times.

There are also some important misconceptions surrounding Hoyer.  Despite his reputation as a dink-and-dunker, 28 percent of Hoyer's passes have traveled at least 15 yards, the fourth-highest rate in the league.  Moreover, Hoyer is not getting by with a bunch of clutch fourth-quarter comebacks, as his total Win Probability Added (WPA) is almost exactly in line with what we would expect him to produce given his EPA: 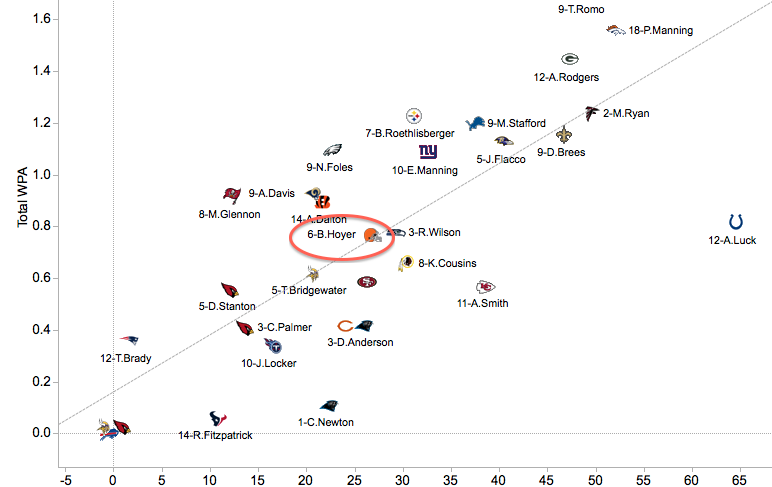 Even if Hoyer's turnover rate regresses, the Browns can turn to a running game that currently boasts the seventh-best success rate in the league at 45 percent.  The rookie tandem of Terrance West and Isaiah Crowell excelled over the first month, raising questions as to whether Ben Tate deserves his starting spot back.

Tate has averaged 4.7 yards per carry over his four-year career, but injuries and fumbilitis (10 fumbles in just 43 career games) have plagued the talented back.  In fact, AFA has seen Tate as a significant net negative over the past two years:

In fairness, Tate has posted a generally adequate success rate, as his 46.4 percent rate this season would rank eighth among backs with at least 50 carries.  Nevertheless, the West-Crowell tandem has helped Cleveland produce the third-highest rushing EPA/P this season.  Just as Hoyer's unexpected success has provided the Browns no reason to play the first-rounder Manziel, West and Crowell have suggested that the free-agent signing Tate should not immediately re-assume the majority of the carries.

There are certainly real problems with Cleveland that could derail their hot start.  You'll notice that not one peep has been made about their defense, which sits 26th in these rankings and 31st in Football Outsiders' DVOA.  Additionally, the loss of All-Pro center Alex Mack could be devastating, as right guard John Greco will now slide over into the middle, with Paul McQuistan filling in for Greco's old spot.  That's a potential downgrade at two interior positions, which likely has bad implications for the running game.

But with an upcoming three-game stretch against Jacksonville, Oakland and Tampa Bay, the Browns have an opportunity to bank six wins by midseason.  The freebies end there, as the Browns do not face a team in the second half that currently owns a losing record, apart from a Week 12 trip to the Georgia Dome.

The Browns are a weird team because we can predict most of the important shifting variables that will come into play.  Does Gordon's return and Cameron's improving health offset the likely turnover correction from Hoyer?  Will Joe Haden begin to post numbers more commensurate with his play? How much does Mack's absence hurt the running game?  To date, Cleveland has fully earned its current top-10 status, but if the Browns are to make the playoffs for just the second time since their revival, the margin for error is smaller than their eighth-place ranking would suggest.


- The Detroit Lions have possessed top-tier talent for years now, and this not the first time they have teased.  In their 2011 playoff campaign, the Lions started 5-0, with a plus-70 point differential that was second-best in the league.  Last year, Detroit started 6-3 and were sat ninth in these very rankings at the time.

The difference this year is that the Lions are not merely a high-flying squad whose fortunes rest on Matthew Stafford's fickle right arm.  Detroit possesses the first-ranked defense by not only this site's rankings, but also multiple other metrics.  By all accounts, the Lions defense has stood out as far and away the best in the league: 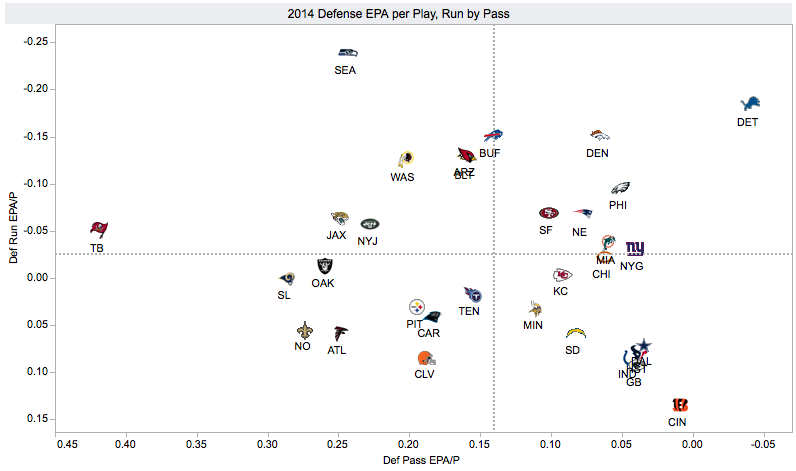 Most jarringly, the Lions rank first in pass defense EPA/P, as they are the only team to hold opposing offenses to a negative EPA this season.  This is a team with Darius Slay and Rashean Mathis as its starting corners.  Isa Abdul-Quddus has received significant playing time at safety.  Injuries have wreaked havoc on the all-important nickel corner position, where the Lions are on their fourth option in Danny Gorrer.  Gorrer, who Detroit signed on September 16, has been in the league since 2009 and has been cut seven times.

I say these things not to overwhelm you with trivia on obscure defensive backs, but to highlight how absurdly mind-boggling it is that the Lions have been the best pass defense in the league with this secondary.  Some of this is due to the Lions' excellent front seven, of course, but no one posts a league-leading rate from pass-rushing alone.  Detroit does rank first in sack percentage, but eight of their 20 sacks came last week against the overwhelmed Vikings.

Still, it would be a discredit to simply gloss over the All-Pro performances put forth so far by Ndamukong Suh and DeAndre Levy, both of whom can make claims as the best players at their respective positions.  The latter in particular has stepped up for the loss of excellent middle linebacker Stephen Tulloch, posting the highest EPA per game of any linebacker in the league this season.  Levy's freakish athleticism has turned him into one of the game's best all-around linebackers, alongside Lavonte David and (when healthy) NaVorro Bowman.

As for that much ballyhooed offense, it appears new offensive coordinator Joe Lombardi has made a critical difference in Stafford's career.  Lombardi, who was Drew Brees' old quarterbacks coach, has transported the high-percentage West Coast principles from New Orleans to the Motor City.  Consequently, Stafford is on-pace to throw just 11 interceptions this season, which would be by far his lowest mark in a healthy season (he threw 17 in 16 games in 2012).

While Stafford's success rate has taken a small hit, he is also completing over 62 percent of his passes while posting a 0.20 WPA, both of which would be his best marks since 2011.  Injuries to Calvin Johnson, Reggie Bush, Joique Bell and Joseph Fauria have deflated Detroit's overall offensive stats.  Still, there is reason to believe those numbers will rebound once Stafford's skill position support returns to full health.

If there's a concern with the Lions, it is along the offensive line.  Detroit has surrendered 20 sacks this season, third-most in the league.  Those aren't isolated incidents either, as the Lions have also conceded 29 quarterback hits (fifth-most) and 21 tackles for loss (tied for fourth-most).

Right tackle had been a revolving door, with Garrett Reynolds and Cornelius Lucas splitting duties, but normal starter LaAdrian Waddle returned two weeks ago against Buffalo.  Veteran left guard Rob Sims has been the other troublesome starter, allowing a team-high 10 quarterback hurries, according to Pro Football Focus' count.

Even with the line's issues, though, Detroit is no longer a high-variance team vulnerable to wild weekly fluctuations.  Apart from a Week 2 clunker against Carolina, most of the Lions' games have looked remarkably similar.  If the likes of Mathis, Slay and Glover Quin in the secondary can continue pulling their weight to buttress the sterling front seven, Detroit's defense makes the Lions legitimate contenders, even in the deep NFC.