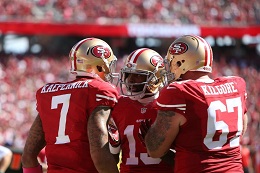 Despite what Dennis Green may have you believe, early-season form does not confirm that teams are who we think they are.  Even underlying stats about true talent, such as Pythagorean winning percentage, have been shown to hold little predictive power at this early stage of the year.

That's hardly a surprise just five weeks into the season, as single-game outliers can drastically sway a team's ranking (see Tampa Bay).  Though this rankings formula does incorporate a gradually diminishing measure of 2013 strength to reduce some of the early-season noise, we still do not have a clear line of demarcation, after which we can fully believe in the rankings.

Consequently, there are a couple teams in the middle who no one can really seem to get a grasp on.  Let's take a look at two of those teams to see which side of the ledger they most likely belong.

Are these storied franchises going to emerge as playoff contenders or disappointing washouts?

- After floundering around the first three weeks, the San Francisco 49ers have moved into the top half of the rankings for the first time this year following a pair of tight home victories.  There seem to be two schools of thoughts on the Niners—some like Football Outsiders suggested that the Niners were toss-ups to reach the postseason, but the general public appears to believe that Jim Harbaugh has established an impermeable foundation incapable of such a sudden collapse.

Harbaugh's own dubious future with San Francisco throws a monkey wrench into that theory, but since everything surrounding that situation is hearsay at the moment, we'll leave that out of the equation.  On the field, the 49ers have shockingly been buoyed by the second-most efficient defense, highlighted by the fifth-best pass defense in the league so far.

On paper, that unit looks like the Niners weakest link.  With Aldon Smith suspended and NaVorro Bowman recovering from his gruesome January knee injury, the 49ers have lost arguably the game's best edge-rusher and all-around linebacker.  In addition, San Francisco lost 60 percent of its starting five-man nickel secondary from 2013, a total that has increased to 80 percent with Tramaine Brock injured since Week 1.  The Niners replaced those four losses with:

Ward has struggled, but the trio of Culiver, Cox and Bethea have been excellent this season, with the latter shockingly thriving as arguably the league's best safety through the first four games.  The 49ers have not really received any pass-rushing help from the Smith-less crew, but the secondary combined with a slightly above-average run defense has been sufficient to sustain San Francisco as an elite defense.

However, there are signs that things are going to crash, even before Smith and Bowman return in the second half of the year.  For one, the numbers just don't add up: check out the traditional stats comparing how the Niners defense was doing at this time last year, as well as a visualization showing where the 2014 defense rankings in pass and run EPA: 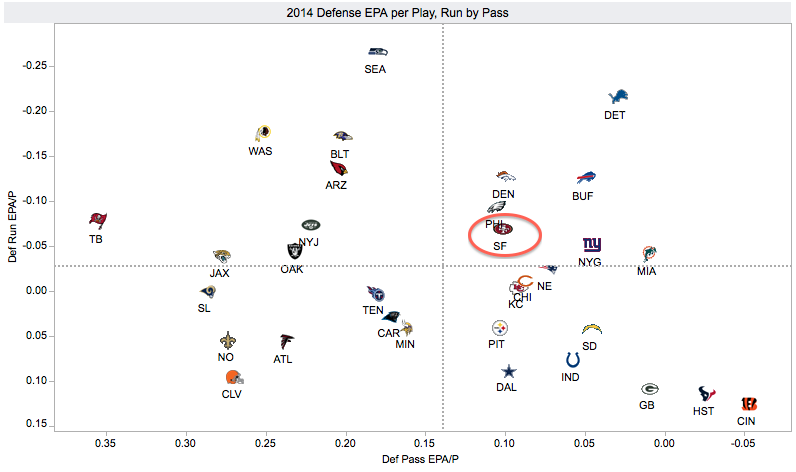 The 49ers may be off to the same 3-2 start, but their pass defense is worse across the board from last year.  Furthermore, the EPA chart portrays San Francisco as a slightly above-average unit against both the run and pass.  Perhaps that's better than some forecasted before the season, but it's still far from what we'd expect from the second-most efficient unit.

In reality, San Francisco is making timely plays, as their pass defense WPA ranks fifth, despite an EPA/P that only ranks 14th.  There are more numbers to support this—FO's drive stats show that the 49ers have posted the highest turnover-per-drive rate, while also benefiting from the fourth-best starting field position that makes those turnovers more likely to translate into points (and thus a disproportionately higher WPA).

Colin Kaepernick does not appear to have made enough progression to totally offset regression from those numbers.  Though he will likely blow away his previous career-bests in completion percentage, yards and touchdowns, Kaepernick is also making more mistakes, as evidenced by a lower EPA/P and adjusted yards per attempt.  Anecdotally, Kaepernick's late-game woes against Chicago and Arizona illustrate how the young quarterback is still trying to come to grasps with his burgeoning workload.

Smith and Bowman figure to offset some expected regression when they return to the lineup, though the latter could be limited the entire season.  San Francisco does not look like the same juggernauts they have been the past three years, but with no real crippling liabilities, their depth should carry them to another winning record.  Still, if the 49ers' WPA regresses to a top-15 rather than top-five mark, San Francisco could lose a couple wins in what figures to be a brutal NFC wild card race.

- Whereas the Niners have recently re-established themselves as a model franchise, the Pittsburgh Steelers are tenuously holding onto that label after two consecutive 8-8 seasons.  Though they are only ranked 18th this week, AFA's own stats suggest that they like Pittsburgh better than that.

The Steelers are mostly weighed down by an unimpressive 0.45 opponent GWP, which is tied with the Rams for the worst opponent strength in the league.  But Pittsburgh does possess the ninth overall offense and 12th overall defense, as they are essentially slight above-average in every statistical category.

However, the Steelers' play has not matched those steady indicators.  While the defense has settled in as an unspectacular unit, the offense has exhibited significant fluctuations in EPA every week, not necessarily in logical relation to opponent strength: 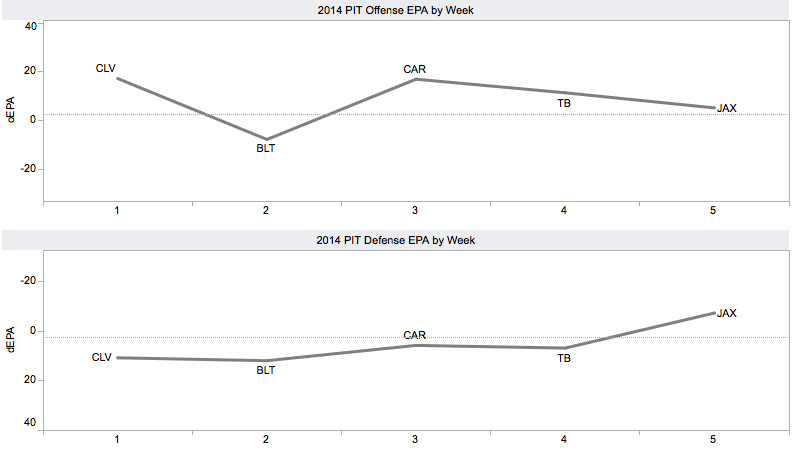 Among Pittsburgh opponents, only the Panthers currently rank in the top 10 in defensive EPA, and that was somehow the Steelers' second-best offensive EPA of the season.  That win was catalyzed by 264 rushing yards against a defense that has otherwise conceded an average of 96 rushing yards per game.  On the other hand, five of their six halves against the Browns, Buccaneers and Jaguars have been uninspiring; that trio represents three of the five worst defenses so far by these rankings.

Despite these inconsistencies, the Steelers offense seems likelier to settle in as a top-10 unit.  Pittsburgh possesses the seventh-best overall offensive success rate, with red-zone woes (26th in TD percentage) likely accounting for the discord with EPA.  Ben Roethlisberger is also thriving in his second season under Todd Haley's scheme, posting his highest success rate and adjusted yards per attempt since 2009.  Roethlisberger's interception rate has diminished significantly over the past two seasons, and while the deep shots are fewer and farther between, the steadiness of top targets Antonio Brown, Heath Miller and Le'Veon Bell has created an efficient low-risk, moderate-reward passing game.

If there's a real area of concern, it's the defense, specifically the pass coverage.  By virtue of playing Tampa Bay and Jacksonville the past two weeks, the Steelers have yet to feel the effects of losing Jarvis Jones, Ryan Shazier and Ike Taylor for extended periods.  Out of desperation, Pittsburgh has lured old hero James Harrison out of retirement.  Harrison may remain fearsome as ever, but his pass-rushing skills have long dissipated, and he generally appeared a step slow and surprisingly unaware in his debut.

The Steelers are about to receive a boost in opponent GWP, as Pittsburgh faces Cleveland, Houston, Indianapolis and Baltimore over the next month.  Their AFC North competition does not do them any favors; despite their Week 5 losses, the Bengals and Ravens remain two of the conference's more well-rounded teams, while the Browns have experienced a startling bout of stable quarterback play.

So long as Roethlisberger remains healthy—far from a given considering his history, by the way—Pittsburgh should possess one of the AFC's better offenses.  But if the defense regresses towards bottom-10 status, the offense has a razor-thin margin if the Steelers are to return to the postseason for the first time since their ignominious Tebow-fueled exit in 2011.