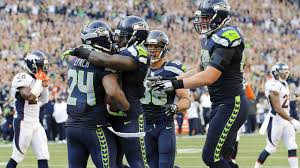 This week's rankings saw fairly significant shifts, as one might expect this early in the season.  At this time last season, only six of the original top 10 remained in the upper third.  However, only two of the bottom 10 moved into the upper half, suggesting that the early cellar-dwellars are likely to flounder all year.

That pattern holds scary implications for a couple teams, something we will touch on later.  Of the bottom 10 teams from this time last year, only San Francisco rebounded to post a winning record.  Still, that does not mean teams at the top will remain in the penthouse, as the Texans, Titans and Falcons will attest to.

I didn't see any complaints about this write-up format last week, so we'll dive deeper into a few surprises generated by the rankings, as well as teams that jump out for some quirky statistical pattern.  Still, feel free to critique this format now and as the season moves along.  I'm nothing if not a man of the people.

These teams look like the ones whose rankings most clash with conventional wisdom.

- Despite being plagued by inconsistencies at quarterback along with injuries and suspensions on defense, the Miami Dolphins finish Week 4 ranked sixth in the efficiency rankings.  That high ranking likely comes as a surprise to many, especially considering that many openly wondered about Joe Philbin's job security before Miami's blowout win over a hapless Raiders squad.

One doesn't need to look far to see the root of Miami's high ranking, though.  The Dolphins defense ranks first overall, buoyed by top-10 rankings against both the pass and the run.  In particular, Miami's 67 percent defensive run success rate, which sits at sixth overall, represents a stark turnaround from the 54.2 percent rate that was sixth-worst last season.

In fairness, the Dolphins have faced four relatively meager offenses in New England, Buffalo, Kansas City and Oakland.  All of those teams sit at 27th or worse in the offensive efficiency rankings, so one could reasonably expect even a competent defense to dominate such putrid competition.

However, since these rankings are adjusted for opponent strength, we cannot dismiss Miami's success too readily.  In fact, the Dolphins would likely rank even higher if were not for their 0.46 opponent Gross Winning Percentage (GWP), as only the Rams have a lower opponent GWP to weigh them down.  With starters like Reshad Jones, Koa Misi and Dion Jordan due for imminent returns to the lineup, there is reason to believe that Miami's defense can remain a top-five outfit the entire season.

The Dolphins will be an interesting experiment to watch throughout the season, as it appears they are set to try and win with a seemingly anachronistic combination of defense and ball control.  Before you cry out about the Seahawks and 49ers, note that both Russell Wilson and Colin Kaepernick finished in the top eight in EPA per play among quarterbacks last season.  In contrast, Ryan Tannehill currently ranks 30th in that category this year, even while essentially tossing a perfect game against the Raiders.

It's still early, and as the season progresses, the EPA visualizations will tend to cluster around the middle.  Still, the Dolphins stand out as an outlier at the moment, with their defense sitting at the intersection of top-five teams (Bengals, Lions) and the offense alongside bottom-feeders like Tampa Bay and Buffalo: 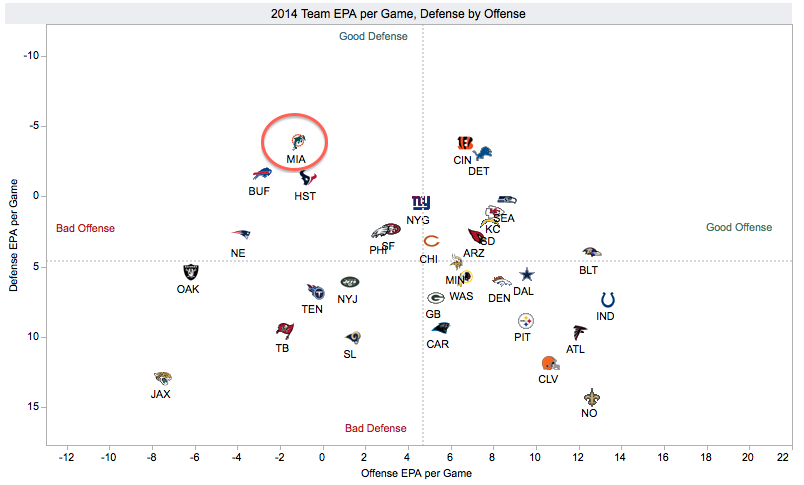 Such an imbalance is not really palatable long-term, though.  Last year, teams at the extreme ends of the good defense/bad offense quadrant were six- to eight-win flameouts like the Ravens, Giants and Bills.  Miami does have a nice running game, as Bill Lazor has implemented a Chip Kelly-influenced scheme that has led to a 54 percent run success rate, second-best in the league behind Seattle.  For reference, the original Kelly scheme produced a league-leading 49 percent rate in 2013.

But Tannehill ranks near the bottom of virtually any passing statistic you can imagine, and when their defense faces a competent offense, it's hard to imagine the Dolphins keeping up if they fall behind.  With upcoming games against top-tier offenses like Green Bay, Chicago and San Diego, the Dolphins' sustainability will soon receive a stiff litmus test.

- Readers last week noted that these efficiency rankings do not consider special teams efficiency.  While the game's third phase often has a minimal impact, some pinpointed Washington as a team that may have benefited disproportionally from the exclusion of special teams in the formulation stew.

Despite what the eye test may suggest, it appears D.C. actually looks like a relatively complete team.  They have the sixth-most efficient offense, headlined by the sixth-ranked passing and running offenses (no, I am not purposely highlighting every sixth-ranked unit this week).

To be completely honest, I am having a hard time reconciling these numbers.  Alfred Morris followed up an inefficient 2013 with an even worse start to 2014, ranking 60th in EPA/P among all running backs.  For the second consecutive year, Roy Helu has actually been the better per-play back, ranking fifth in EPA/P.  It's worth noting that the stat does tend to favor those with a small sample size of carries; when Helu was a starter in 2011, he finished 41st in the category.

It's a similar story at quarterback, where Kirk Cousins and Robert Griffin III rank 19th and 37th, respectively, in EPA/P.  There is precious little evidence of either as a viable long-term starter, as these visualizations illustrate: 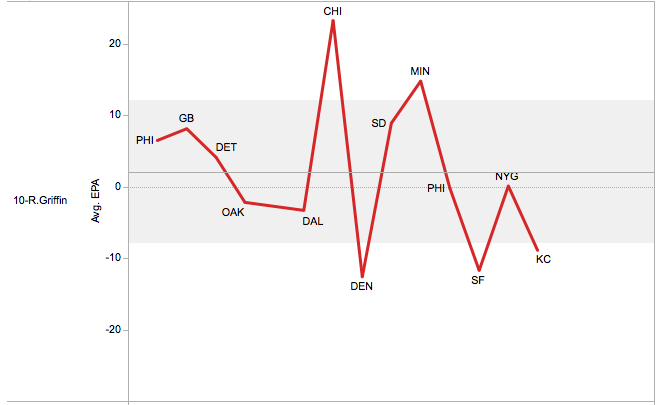 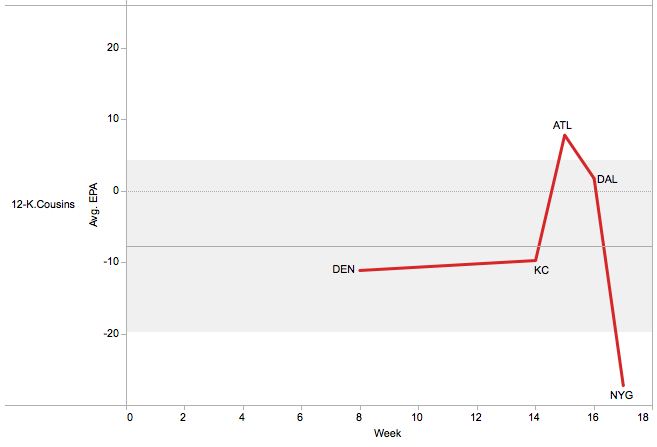 Nor has Washington been propped up by a difficult strength of opponent factor, as three of the four defenses they have faced thus far rank in the bottom half of the defensive rankings, with Philly standing out as the lone exception.  Overall, Washington's opponent GWP is 0.46, a low mark that suggests they could receive a small boost from their 12th overall ranking in the upcoming weeks.

The one thing D.C. does do well is defend the run.  Their 68 percent run defense success rate is third-best in the league, as that aspect has propped up a league-average pass defense that figures to get worse now that top corner DeAngelo Hall is on injured reserve.  Give credit to Chris Baker, who has been a net-plus as both a nose tackle and 3-4 defensive end, as well as Jason Hatcher, whose 14 total defensive successes ranks sixth among all defensive ends.

So how much has Washington's special teams harmed them this season?  Football Outsiders ranks the unit 31st in DVOA after ranking them a historically terrible unit in 2013, while Pro-Football-Reference's simple rating system (SRS) has rated them negatively in three out of four games so far.  With huge impact plays conceded like the blocked punt return for a touchdown against Houston and a kick return touchdown against Philly, it's clear that Jay Gruden has yet to reverse his predecessor's sins.

Their excellent run defense is only a single variable, and as the Giants discovered last week, an almost irrelevant one against Washington's undisciplined and quickly disintegrating secondary.  It seems as though much of D.C.'s lofty offensive numbers stem from their off-the-charts performance against a helpless Jacksonville squad back in Week 2.  Barring an unexpected leap forward from Cousins or Griffin, a Washington regression back to the bottom half seems like a safe bet.