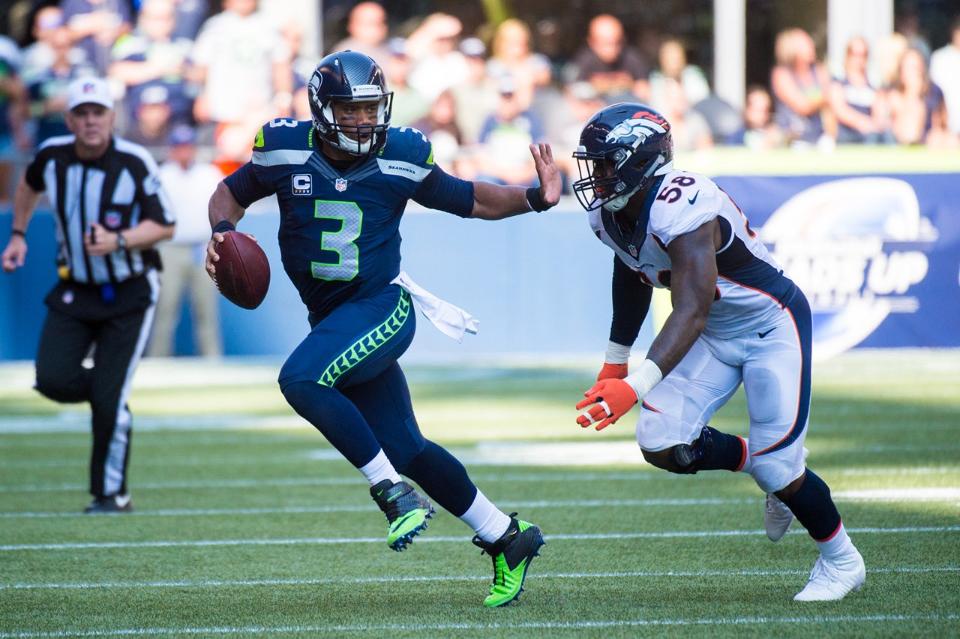 For the final team efficiency rankings of 2014, I thought it might be instructive to break down some of the process that goes into making the sausage.  AFA uses a different secret sauce than other analytics rankings sites, and if you're interested in the math behind the process, Brian has posted a detailed example of how this model spews it outs rankings here and here.

While I won't be doing the same computational legwork, there are elements within the model that reveal some general trends about the types of teams that AFA sees favorably (or unfavorably).  You don't have to agree with the final outputs, but I suspect that the small sample size of a 16 game season coupled with football's naturally high attrition rate prevents us from ever generating an ideally predictive model year after year.

We'll kick off the final look with a breakdown of a particularly unusual season-long ranking, as well as a look at the biggest changes from the beginning of the season.

Looking at a pair of controversial AFC East teams.

- Despite what other metrics and the eye test would suggest, AFA has put the Miami Dolphins ahead of the New England Patriots all season, including in the final rankings.  Miami barely eeked things out in the end, with a 0.61 Gross Winning Percentage (GWP) compared to the Patriots' 0.60 mark.  If the Pats had not treated their regular-season finale, it seems plausible that they may have passed the Fins at the finish line, especially when seeing their ugly offensive numbers.

Nevertheless, there was not one week since the rankings came out after Week 3 that the longtime AFC East bullies finished ahead of Joe Philbin's Toon Squad.  It's especially odd when seeing that AFA's own Expected Points Added (EPA) metric portrayed New England as possessing a significantly better offense, while also holding the edge on defense due to Miami's late-season collapse on that side of the ball: 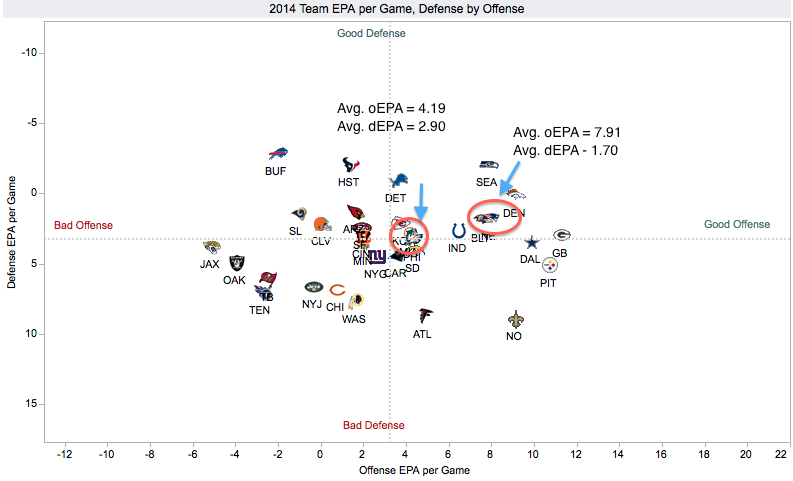 The answer may lie in the fact that Miami appears to stand out particularly in rushing offense.  The Dolphins finished the season with the NFL's highest success rate at 51.6 percent.  New England's best stat was actually also rushing success rate—they checked in at third overall at 45.6 percent—but otherwise, the Patriots were surprisingly average in just about everything else.

It's an interesting trend over the past two years, as the top-ranked rushing offense has exceeded ostensible expectations all season long.  In 2013, Chip Kelly's Eagles were a top-five fixture in the rankings, despite sitting 3-5 at one point and not truly heating up until the end of the season.  Philly finished fifth at the end of last season's rankings, the same place where Miami ended up this season, spurred by a 49 percent rushing success rate that was four percent higher than the second-place team.

Considering that running the ball is definitely less mathematically favorable than passing it, the first thought should be one of alarm—is this site being hypocritical to its own research?  Correlating each team's ranking in run success rate with their overall ranking in GWP, DVOA and SRS—three metrics of team strength—here's what we get: 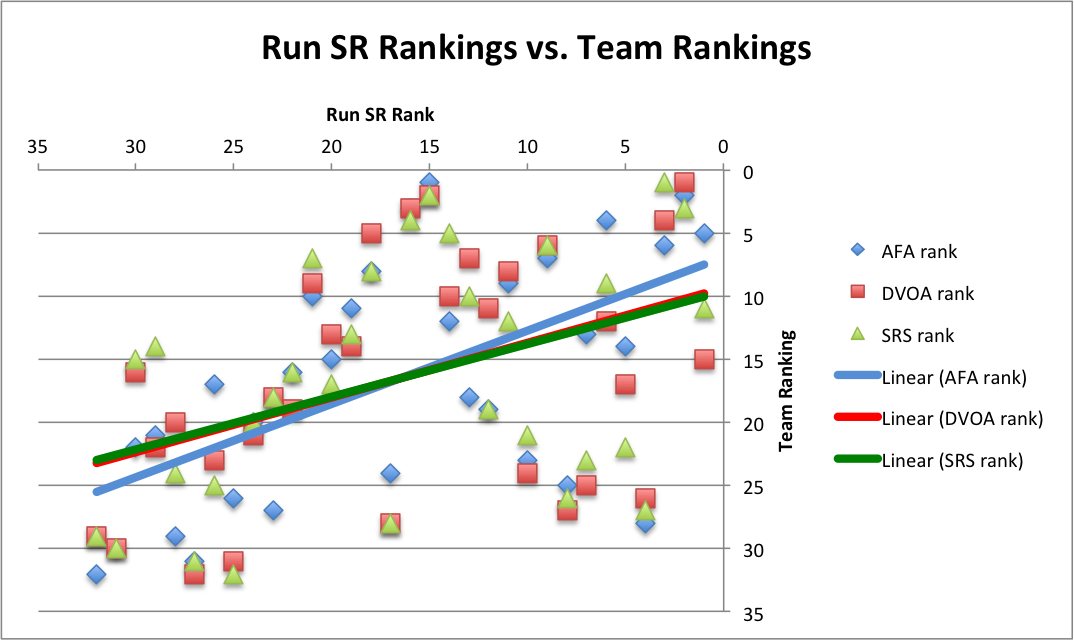 To be clear, this is far from perfect methodology.  It's only looking at one season, after all, so it would be more helpful to look at all of the available data going back to 1999 before drawing any actual conclusions.  Moreover, it's not as though all three team ranking measurements incorporate that run success rate into their formulations, which would be necessary to really draw definitive conclusions.

Still, it's telling that the AFA trendline differs noticeably from either DVOA or SRS, which are virtually indistinguishable from each other.  The correlation coefficient for the blue AFA line is 0.34, while both DVOA and SRS check in right around 0.17.

Even the stronger AFA correlation doesn't go so far as to say that run success rate should be a primary determinant in the team's ranking, so that alone can't explain why the Dolphins were ranked so high the whole season.  But it does represent a part of the formula, and based on these findings, it appears that AFA places more weight on the running game than at least those two other measures.  Again, this doesn't mean that one methodology is particularly better or worse than the others, but looks like the most prominent way in which this site diverges from its advanced metric cousins.

No, not the people.  This is a look at the teams that constituted the top and bottom of the rankings.


- The Denver Broncos have been the site's top-ranked team since Week 6, and despite some concerns surrounding an ostensibly dead-armed Peyton Manning, the Broncos are the runaway top team in the final rankings.  Denver's 0.77 GWP, which would translate to an average of 12.3 wins per season, puts them almost exactly one full win better than the next best team in the league.

However, in finishing with a GWP of 0.71, the Seattle Seahawks became the first non-Denver team to crack the 70 percent barrier all season.  Indeed, stats like weighted DVOA suggest that the Seahawks have been the league's "hottest" team recently; Seattle's +95 point differential since Week 12, when Bobby Wagner and Kam Chancellor simultaneously returned to the defense, is nearly 30 points better than any other team over that span.

Right now, it appears exceedingly likely that the Super Bowl will consist of some combination of Seattle or Green Bay from the NFC and Denver or New England from the AFC.  AFA does not give any of the other eight playoff teams more than a five percent chance of reaching the Super Bowl; Football Outsiders and FiveThirtyEight give similarly heavy odds to the four-team hegemony.

If those four teams comprise the likeliest contenders, perhaps a more accurate division would be Seattle and then everyone else.  EPA doesn't always agree with these rankings, as we've seen throughout the season, but dividing the season into eight game halves, we see that the Seahawks' have been far and away the league's best team based on cumulative EPA in the second half: 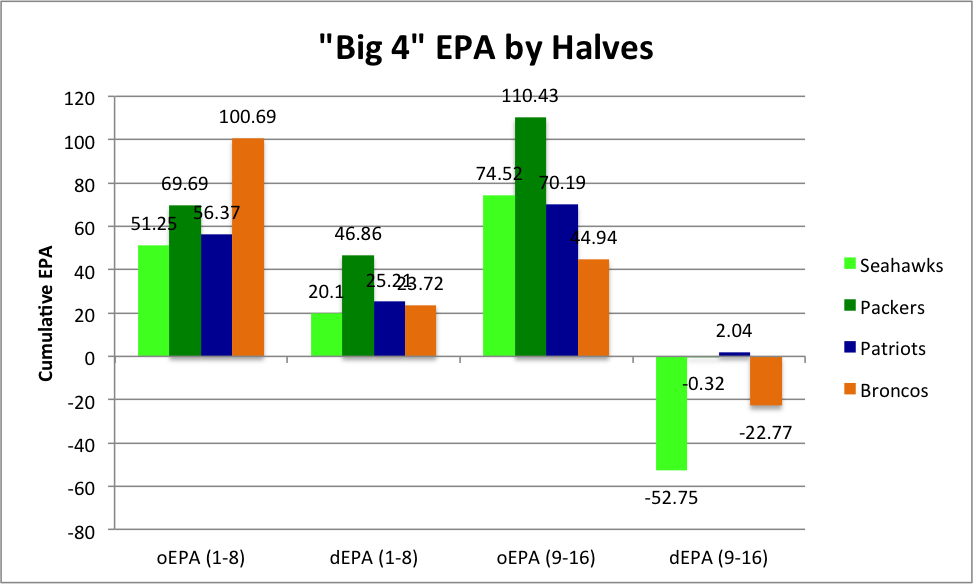 EPA would suggest that the Seahawks and Packers are the two best teams in the league, though New England's second-half offensive EPA would probably have exceeded Seattle's if the Patriots had not rested starters in Week 17.  But while Green Bay's gaudy second-half offensive EPA looks impressive, the complexion of today's NFL suggests that having a premier defense may be more valuable.  Whereas nine teams finished with a cumulative offensive EPA over 100 this year (including all Big 4 teams), just four teams had a negative defensive EPA (with Seattle being the only Big 4 team to reach that criteria).

Combined with holding home-field advantage in the inferior conference, the Seahawks are probably the statistical favorite to repeat as champs.  The model may see Denver as the best team based on season-long aggregation, but based on conference competition and second-half form, the numbers all point to Seattle.