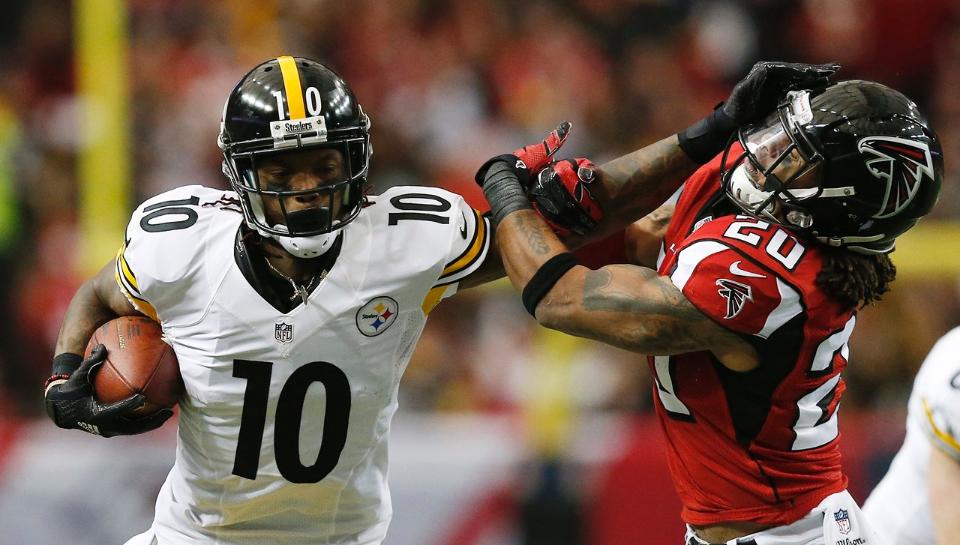 With just one more Sunday left before the postseason, one of the most popular features on this site has become the live playoff probabilities.  If you've read this article regularly this season, you've probably noticed how the efficiency rankings would seemingly differ significantly from what the postseason odds would suggest.  That largely stems from the fact that those odds are based on Vegas spreads, which obviously caters to the mainstream perception.

Nevertheless, it's still interesting to examine the disparity between those two AFA models.  To change things up in this abridged look at our penultimate rankings, let's highlight some of the biggest differences between the current odds and season-long model.  Both are predictive models, of course, so a deeper dive into a few case studies might reveal which one appears likelier to fulfill its purpose.

These three teams are ranked highly by the efficiency rankings, but their odds don't quite match up.


- Though they officially fell out of contention for the top seed on Monday night, the Denver Broncos have been the prohibitive top-ranked team in the AFA rankings all season.  Even with the loss, their Gross Win Probability (GWP) sits at 0.75, five percent better than second-place Seattle (who finally supplanted Miami).

However, the Playoff Probabilities see Denver as 36 percent favorites to reach the Super Bowl and just 20 percent possibilities to win it all, well behind New England and Seattle.  That's actually a bit more favorable than Elo, another metric that incorporates Vegas spreads into their model, which pegged the Broncos with a 17 percent chance of winning the Super Bowl headed into Week 16.

Much has been made of Denver's shift into a run-heavy offense.  The numbers do bear this out; since C.J. Anderson took over for an injured Ronnie Hillman/Montee Ball duo in Week 10, the Broncos have run the ball on 44 percent of their offensive plays, compared to just 39.2 percent of plays over the first nine weeks.  But it's not clear that Denver has actually been a better offense; after averaging 6.21 yards per play in that earlier stretch, second-best in the league, the Broncos are down to 5.84 yards per play since Week 10, which ranks sixth in that span.

Obviously that latter mark is far from disastrous, but it also shouldn't be surprising.  There's an incalculable amount of data clearly illustrating how much less efficient running the ball is in comparison to passing, and that balance is likely even more skewed when considering that the Broncos happen to employ one of the three to five greatest quarterbacks of all-time.  It's not surprising that Denver's offensive Expected Points Added (EPA) has most hovered around zero since Week 10, pending the numbers from the Cincy game:

Clearly Peyton Manning's health is at the forefront of Denver's Super Bowl odds.  Twenty percent likely undersells Denver's championship odds with a healthy Manning, especially when considering the AFC's weakness.  Virtually every model has either the Patriots or Broncos as the AFC Super Bowl rep in 50 to 75 percent of simulations, so even while Denver would probably be underdogs at Foxboro, they would only need one home win to reach Gillette Stadium.

Of course, Manning has been dealing with a thigh injury, and some of those fluttering picks from his four-interception night this week have some wondering about potential dead-arm syndrome.  If there is indeed something wrong with Peyton, then it suddenly becomes hard to envision Denver's offense being championship-caliber behind a relatively inefficient running game, a statement that would have sounded shocking one month ago.


- The Miami Dolphins were officially eliminated from the playoff race on Sunday despite their thrilling comeback against the Vikings.  At 8-7, the Fins will make for an interesting case study when I delve deeper into some rationale for these articles in a postseason article.

Regardless, while the mainstream public seems to have formed a consensus "Big 4," the AFA rankings have similarly constructed a Rushmorian hegemony at the top.  However, the Dolphins remain solidly ahead of the AFC East-leading Patriots, with 0.65 GWP compared to 0.61 for the Brady Bunch.

That mark would suggest a true average record of 10.4-5.6 over a 16-game schedule, something that seemingly overestimates the Dolphins by as much as a full win.  With one game remaining, Pro-Football-Reference's Pythagorean win expectancy pegs the Dolphins with 8.2 expected wins, right in line with their 8-7 record. Other models like DVOA are high on Miami, but not to the same extent as AFA has been all season.

A very cursory look suggests that a bizarrely high offensive success rate might be behind Miami's ensconced position at the top.  The overall efficiency soup portrays the Dolphins as the ninth-best offense overall, but based on success rate alone, only the Saints have eclipsed Miami this season: 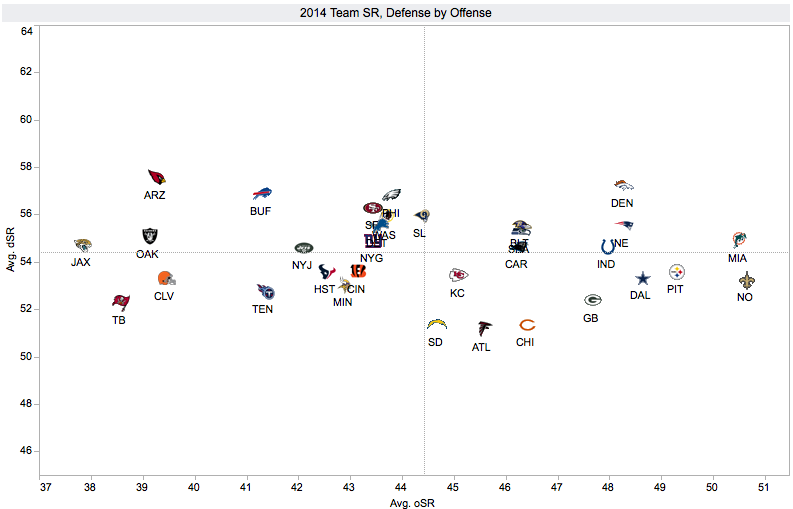 The EPA doesn't exactly match because there aren't many high variance situations in which Miami has stood out.  The Dolphins are almost exactly middle-of-the-pack in both third-down conversion rate and turnover percentage.  Success rate applies to all downs, but on first and second down, Miami's offense ranks 12th in yards per play.  That's solid, but hardly something that would augur the second-best offense in the league by success rate.

Miami has arguably been AFA's biggest mystery this season, and there isn't enough space to flesh out all the reasons why the Dolphins are seen as not just underrated, but potentially elite.  The Dolphins' record obviously did not reflect that this season, so it will be instructive at some point to examine why.


- On the heels of their fourth win in five games, the Pittsburgh Steelers were this week's biggest riser, jumping up five spots to reach the top 10 for the first time this season.  The model still puts them behind the Ravens, but at 0.56 GWP, the model doesn't see the Steelers as significantly worse than most of the second-tier AFC contenders.

However, the probability model seems to portray the Steelers as the fourth wheel in the AFC, behind Denver, New England and Indy.  This doesn't make them significantly different from these rankings, but at the same time, Pittsburgh is being given just a five percent chance to reach the Super Bowl and a two percent chance to win it all.

That would seemingly underestimate the chances for the No. 1 offense, as the Steelers finally wrested away the top ranking from Denver in that category.  Pittsburgh ranks second in total offensive EPA, just behind Green Bay, but also well ahead of third-ranked Dallas.

There's a chance that we've never seen a Steelers time like this at any point in NFL history.  With an absurd 11.05 offensive EPA per game yet a well below-average 5.74 defensive EPA allowed per game, Pittsburgh is more offensive skewed than it has ever been.  Last year's squad came very close, but in the AFA era (since 1999), the Steelers have not had a team in the good offense/bad defense EPA quadrant: 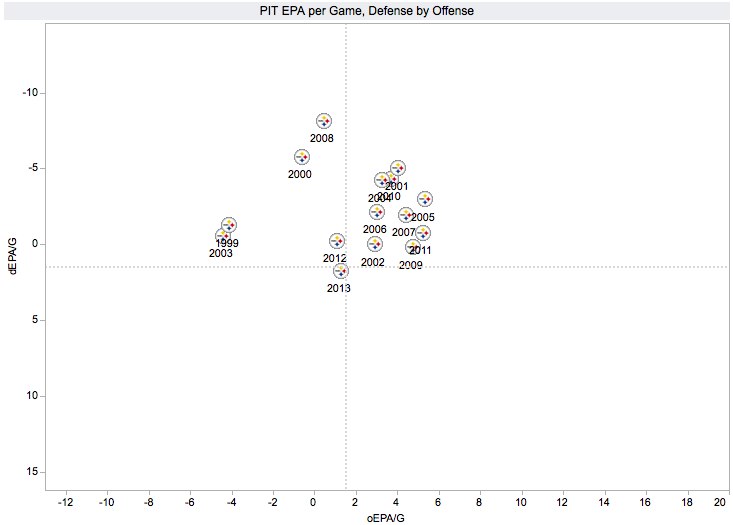 There's evidence that such wildly imbalanced teams can make deep playoff runs (2013 Broncos, 2011 Patriots), but they're rare and usually come from the weaker conference.  With the NFC South champ and quarterback-deprived Cardinals in the NFC field, the playoff field will likely match the season-long evidence that the AFC has reclaimed the upper-hand in the power struggle between conferences.

It will be interesting to see if Pittsburgh's chances shift significantly at all if they beat Cincy in Week 17 and earn a home game during the first round.  The Steelers would also get the No. 3 seed with a win, lining them up for a trip to Denver rather than New England, which looks like a slightly more favorable (albeit still daunting) draw at this point.  Regardless, Pittsburgh is emerging as a sneaky third wheel behind the Pats-Broncos stranglehold, something the odds could reflect next week.