Looking at teams facing the best and worst of times.


- This week's rankings have established a clear line of division among the top six teams.  The seventh-place Ravens sit with a 0.59 GWP, while the top six are all clustered at 0.62 GWP or better.  The Broncos are actually still way ahead of the pack with 0.76 GWP, a byproduct of their status as a top-three offense and defense.  Only one other team, the Seahawks, even has two top-10 units on offense and defense.

The obvious outlier there is the Dolphins, who still curiously sit at second.  Perhaps this is something I'll look into more after the season, but considering that passing offense is the most important variable, it's shocking that the Fins remain this high despite a 5.7 NY/A, the sixth-worst mark in the league.  Miami does possess an excellent rushing attack and pass defense, but that would seem more in line with placing them in the borderline top 10, as DVOA and and PFR's Simple Rating System (SRS) both do.

The Patriots are one team that many might feel deserve better, even though they've been a top six fixture for a few weeks.  The model isn't as impressed with New England's defense as the mainstream public, rating the Pats as a roughly league-average pass defense and a below-average run defense.  EPA/P doesn't really jibe with that, though, ranking New England 16th in run defense and eighth in pass defense.

AFA has some wackier rankings than some other analytics sites, especially early in the season, but like most models, they see the Broncos, Patriots, Seahawks and Packers as part of the NFL aristocracy.  The inclusion of Miami and Indianapolis in that grouping is the unusual factor, as few would see the Patriots as the fourth-best team in the AFC, as well as the second-best in the division they have already clinched.  But just as the model is not an end-all-be-all ranking of the league, we also shouldn't be too quick to dismiss things that look out of whack.  Hopefully I'll have time to take a more in-depth look at the model soon.


- On the opposite end of the spectrum, AFA has established the Oakland Raiders as the clear-cut worst team in the league.  While it's hard to deny that Oakland belongs near the basement, AFA pegs the Raiders with a 0.25 GWP, five percent worse than the next worst team in the rankings.

Interestingly, no other model seems to see Oakland as that poor of a team.  DVOA has the Raiders 25th, SRS has them 28th and even FiveThirtyEight's Elo ratings, which bear a closer resemblance to the mainstream perception because of their incorporation of past seasons' success, puts Oakland 29th.  Even AFA's own success rate graphs suggest that Oakland possesses a roughly average defense, hardly the characteristic of the league's worst team: 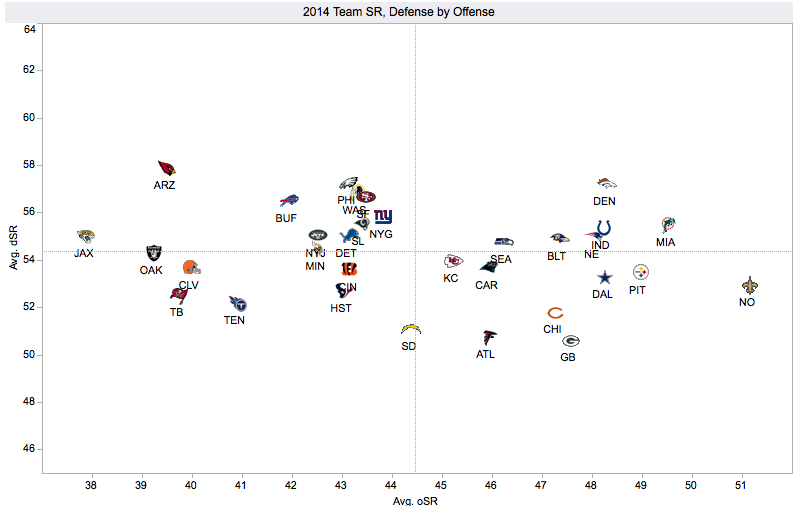 This isn't to suggest that the Raiders are anything but one of the three to five worst teams.  Oakland is not above average in any stat category, and no team has a larger gap between yards per play and yards allowed per play.  An already thin squad has gotten worse due to injuries, with the secondary and offensive skill position corps particularly decimated this season.

Still, in Khalil Mack and Derek Carr, the Raiders appear to have hit on their first two picks of the previous draft (though the jury is obviously still very much in session on Carr).  With a full complement of draft picks in each of the next two seasons, the Raiders can finally begin to correct for their decade-long sins in personnel mismanagement.


Here are the updated team efficiency rankings after 15 weeks.  As always, observations, questions and snide remarks are welcome in the comments section.