Page 2 of 3
On Shaky Ground

Two division leaders are big underdogs to stay in first.


- This column has already spilled plenty of ink on the Arizona Cardinals, so I won't dig as deep into the general trends and long-term outlook as I typically do with other teams.  Arizona has already clinched a playoff berth, so for models like GWP and DVOA that place them well outside the top 12, Cardinals fans will have the #WINZ retort to throw in the face of analytics.

Still, the comeuppance may arrive in January, when Ryan Lindley and Kerwynn Williams will likely comprise the most anonymous quarterback-running back combination in playoff history.  In seven career games, Lindley has compiled an astounding -70.7 EPA and 34.5 percent success rate.  For reference, that EPA is more than double what the worst 2013 quarterback, Geno Smith, compiled in over twice as many starts (-31.9 over 16 starts).  That success rate would also have been the worst in the league last season, right below the exiled Josh Freeman and Brandon Weeden.

We shouldn't blame all of that on Lindley, for six of those games came in his rookie season, when he was unprepared sixth-round pick on a wretched 5-11 Cardinals team.  Bruce Arians had not yet arrived in the desert, as he was still working his magic with another then-rookie, Andrew Luck, in place of a leukemia-striken Chuck Pagano.

Still, it's hard to conceive of a playoff team with a less prepared quarterback in recent history.  The Joe Webb game immediately comes to mind, but that start came about when normal starter Christian Ponder was a gametime scratch.  I compiled some recent quarterbacks with similar profiles to Lindley, with the parameters being: a QB who played from 2000-2014, a QB in his first three years in the league, at least three starts, no more than one win and a AY/A of 4.0 or less (Lindley sits at 3.0 after his first brief appearance).  This was the horrorshow I got:

It's probably not a good sign that Lindley himself is already on that list.  I took away the wins restriction and found that the most obvious comp was probably 2005 Kyle Orton, who "led" the 11-5 Bears to the playoffs despite posting the lowest AY/A and second-lowest NY/A rates in the league.  Lindley will only get two regular-season starts at most, but Bears fans had to endure 15 games of the Purdue rookie, and only made the playoffs behind the league's best defense, a component the Cards do not possess.

The narrative surrounding Williams is less discouraging, though running backs themselves are fungible commodities.  Over 34 carries in the last two weeks, Williams has compiled -2.5 EPA on a 38.5 percent success rate.  That latter mark would rank 35th out of 40 qualified running backs, but it's a small sample size.  Moreover, the Cards have had some O-line turnover due to injuries, one of those two games came against St. Louis' top-ranked run defense (based on SR%).

Arizona probably has less margin for error than any other playoff team, even if they end up playing the NFC South champ in the Wild Card round, the most likely possibility.  AFA still gives the Cards a 62 percent chance of reaching the divisional round, but that likely overestimates their chances of beating Seattle and earning a first-round bye this week.  The bot can't account for the Lindley factor, but there is a strong possibility that the Cardinals will end the season as AFA's lowest-ranked playoff team.


- The Cincinnati Bengals moved up three spots this week's rankings as a result of their 30-0 thrashing of the Browns (who remain the second-highest ranked AFC North team).  The Bengals still rank a middling 14th, however, and a closer look suggests that they belong behind the Steelers and Ravens, as most analytics models portray.

AFA's playoff probabilities give the Bengals a solid 80 percent chance to reach the postseason, though that still ranks behind both Baltimore and Pittsburgh.  However, Cincy figures to be the underdog in their remaining two games, a Monday night home contest against Denver and a visit to Heinz Field in Week 17.

A final record of 9-6-1, which would equate to a 0.60 winning percentage, would still probably exceed the numbers projections.  GWP pegs the Bengals as a 0.54 level team, while PFR has them at with 7.6 expected wins at the moment, nearly a win and a half less than they currently have.

This isn't to pin anything on Andy Dalton in particular.  The Red Rifle has almost exactly duplicated his EPA/P and success rate from 2013, with a demonstrable increase in Win Probability Added (WPA) suggesting that he has done better in high leverage situations this year.  Considering that Dalton's playoff failures have earned him a "choker" reputation, that's not insignificant.  Moreover, with Cincy making the move to rookie Jeremy Hill as the primary running back, the Bengals should improve their roughly league-average ground game by finally leaning towards the more efficient back: 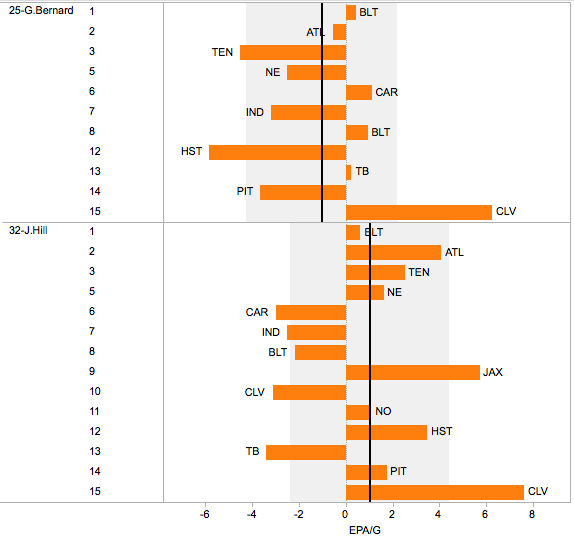 Hill might be the type of boost the Bengals need to vault themselves into the same tier as AFC contenders like the Steelers, Ravens and Colts.  Many might perceive Cincy as on that level already, but in reality, the Bengals are essentially a league-average team in everything besides run defense, where their 51.8 percent success rate is the second-worst in the league.  In many ways, this isn't particularly different from the San Diego unit we dissected earlier, in that the Bengals lack the playmaking ability (22nd in takeaways per game, 31st in sack percentage) to compensate for relatively mediocre per-play defense.

Indeed, Cincy bears a strong resemblance to some recent teams with stellar records but underlying mediocre success rates.  The Bengals average 5.5 yards per offensive play and concede 5.3 yards per play on defense, a profile that roughly aligns them with these recent squads (arbitrary endpoint= 2000): 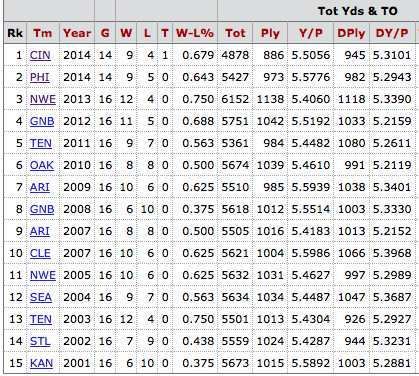 Excluding the 2014 squads, six of the previous 13 squads made the postseason.  However, most of those squads ended up exceeding their Pythagorean win expectancies, with the 2013 Patriots (12 wins vs. 10.5 expected), 2003 Titans (12 vs. 10.7) and 2004 Seahawks (9 vs. 7.9) standing out as the most prominent examples.  That '04 Seattle squad, with a young Matt Hasselbeck-Shaun Alexander combo on offense and a middling defense, bears the strongest resemblance to this year's Bengals squad.

Given the likelihood that they hit the road to face a slightly superior opponent in the wild card round, there is a very solid chance the Bengals end up extending their playoff winless streak to seven.  It's impressive for a team in today's NFL to make the postseason five times in six years, as Cincy is on the verge of doing, but for those frustrated by their inability to get off the B-list contender list, this year's squad does not appear to represent the answer to that trend.