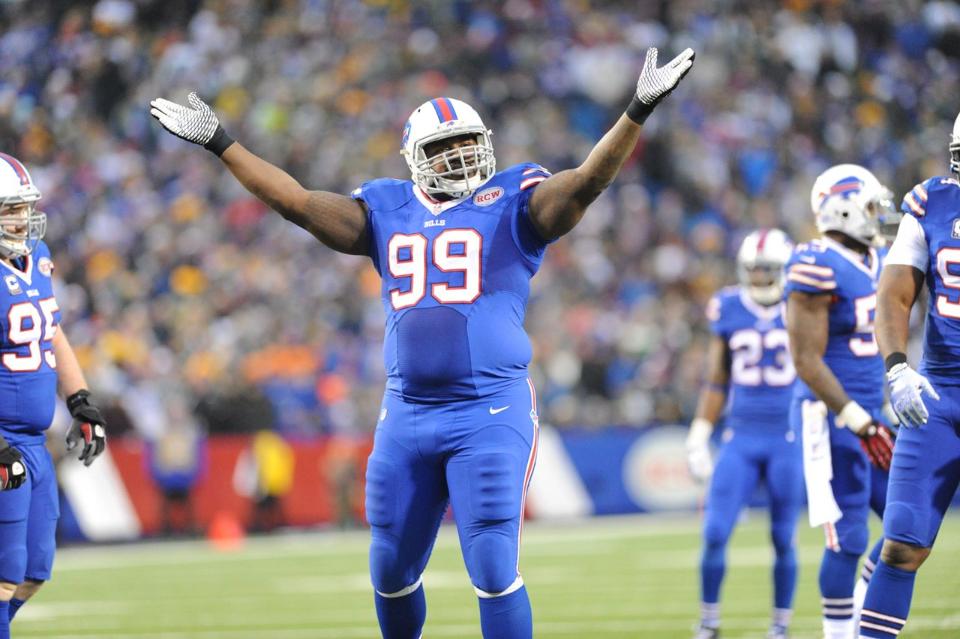 Even as the season winds down, the team efficiency rankings haven't crystallized as clearly as one might assume with the larger sample size of games.  While the days of the big 10-spot swings are gone, multiple teams moved three to four spots, the most meaningful variety of changes we've seen in roughly a month.

That's not entirely surprising when considering the unusual hierarchy that has taken place this season.  With weaker teams in both the elite and lower classes, the middle class is relatively bloated this season, hence the abundance of teams sitting at 7-7 or 8-6.  Whether or not they remain in the playoff race is largely circumstantial (see: NFC South), but these rankings all year have suggested that the gaps between teams in the middle third are not as wide as they typically are.

This week's write-up will focus on a quartet of teams in this range who hold varying levels of hope in the postseason race.

A look at two AFC teams hanging on for dear life.


- Though their odds of snapping the NFL's longest current playoff drought are low, the Buffalo Bills have sat in the top 10 for most of the past month.  The Bills somehow fell one spot in the rankings despite a season-defining victory over Green Bay last Sunday, though their Gross Winning Percentage (GWP) did jump up a point.

Regardless, it's not hard to believe that a team with the second-ranked defense (behind only Denver) would be a top 10 team, even with a decisively below-average offense.  Buffalo does rank first in Expected Points Added (EPA) with -41.1 cumulative EPA this season, nearly twice as much as second-place Detroit.  That's not nearly as dominant as some of the other top defenses—for reference, Seattle led the league with -93.6 EPA last year, while Carolina was second with -73.5—though the Bills' figures to drop a bit more with two games remaining.

Ironically, Buffalo's pass defense has peaked the past month since losing top corner Leodis McKelvin to a season-ending ankle injury.  McKelvin was probably only Buffalo's top corner in name—Stephon Gilmore is a budding star, while underrated offseason acquisition Corey Graham actually leads the Bills DBs in EPA per game.  But McKelvin was still a quality No. 2 CB and very high end No. 3 CB, yet the Bills have forced negative EPA performances in every game since his injury, with the Green Bay masterpiece serving as their best non-Jets EPA showing of the season:

However, when I analyzed the Bills earlier this season, I noted how very few teams had made the postseason with their kind of offense.  At that point, Buffalo was averaging 3.8 yards per carry and 6.5 net yards per attempt (NY/A).  Nine teams had made the playoffs with that combination since the 2004 rules changes, but most of them either vastly exceeded their win expectancies (2012 Colts) or benefited from exceedingly poor division competition (2010 Seahawks).

Buffalo is still averaging the same number of yards per attempt, but the Kyle Orton-led passing game has dipped to 5.8 NY/A on the season, the seventh-worst mark in the league.  Expanding the (admittedly arbitrary) endpoint to the last 20 years, these are the teams to make the postseason with that combo: 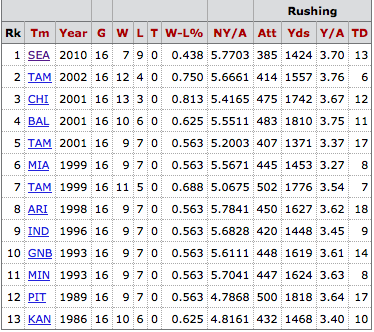 As was the case initially, most of those teams are scattered on the early end of the time point.  The aforementioned 7-9 Seahawks are the only team to make it if we limit the time period to our previous 2004-present scope, while just five have made it since 2000.  Unless you're a team like the 2002 Bucs with one of the greatest defenses in NFL history (-139.7 regular season EPA), playoff success isn't happening.

Still, that doesn't illegitimize what will likely be Buffalo's first winning season since 2004.  We often see strong defensive teams with shaky quarterback play exceed their expected win probabilities, with Arizona and Philadelphia being the most blatant examples from 2014.  But all the metrics portray the Bills as a legitimate eight-win team—AFA's current 0.57 GWP projection would translate to 7.98 wins, while Pro Football Reference's Pythagorean win expectancy pegs Buffalo with 8.4 expected wins.  Considering that the Bills have had less offensive skill position talent than nearly any team in the league this year, that highlights how truly impressive this young defense has been.


- Whereas the Bills have come on strong, the San Diego Chargers continue to dip, falling to 23rd and seeing their GWP dip to a season-low 0.42 this week.  There's no shame in losing games to Denver and New England, but the way those losses unfolded were both surprising and concerning.

After racing out as the early MVP favorite, Philip Rivers experienced a midseason dip before returning to form during a three-game winning streak against Oakland, St. Louis and Baltimore.  But over the past two weeks, Rivers has regressed in leading the offense to 17 points.  Over that span, Rivers ranks last in adjusted yards per attempt (AY/A) among quarterbacks with at least 40 pass attempts in the past two weeks.

It's a tiny sample size, of course, and it's unfair to skew the numbers against Rivers when he has faced two of the best pass defenses in the league.  But even if you want to limit the scope to Rivers' three-game winning streak, a randomly plucked sample that should make him look good, he ranked ninth in AY/A and 11th in plan yards per attempt.  That's perhaps not what we'd expect knowing that the Chargers won all those games (as a side tangent, despite losing all his starts in that span, Zach Mettenberger actually ranked ahead of Rivers in AY/A, perhaps providing a shred of hope for disillusioned Titans fans).  Moving back to Rivers, this is looking like another typical career-average season, despite the hot start:

Apart from the hellfire that was the twilight Norv Turner years, an average Rivers season has been good enough to get San Diego to the playoffs, even with a below-average defense.  Rivers has made the playoffs five times, but apart from his first two years as a starter, he's been saddled with a defense that has conceded a positive EPA to opponents: 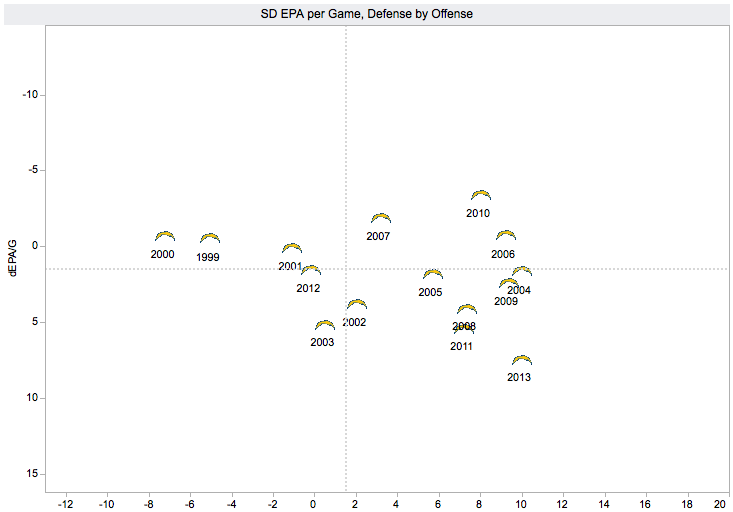 The 2014 rendition is giving up 4.66 EPA/G, and although that's much better than the 7.46 EPA/G mark last season's team conceded, it would still rank as San Diego's third-worst defensive season since 1999.  Most of those problems stem from a poor month from Weeks 6-9, when the Chargers gave up 6.2 yards per play, fourth-worst in the league.

Still, there aren't a whole lot of areas where the Chargers defense stands out in any meaningful way.  Some metrics have implied that the Chargers defense has improved over the past month, but the larger sample size portrays a bleak picture.  San Diego possesses a roughly league-average pass defense and a run defense success rate that ranks 28th.  The Chargers don't generate many big plays either, ranking 28th in interception rate, 29th in total takeaways per game and 29th in sack percentage.  San Diego also ranks 28th in third down defense, though they're closer to average in red zone defense, sitting 14th overall.

To be frank, it's a fairly boring unit that lost its best cornerback in rookie Jason Verrett and has seen exciting outside linebacker Melvin Ingram miss most of the year with a hip injury.  Even its top players, Eric Weddle and Corey Liuget, bear a closer resemblance to the steady jack-of-all-trade types rather than a big-play generator.

There's nothing wrong with being fundamentally sound, of course, but San Diego's defense suggests the need for an infusion of playmaking.  Rivers has been forced to pick up the slack, and while he succeeded for most of the season, his feeble performances against elite competition the past two weeks illustrate the need for a better supporting cast in San Diego (or Los Angeles?) next season.