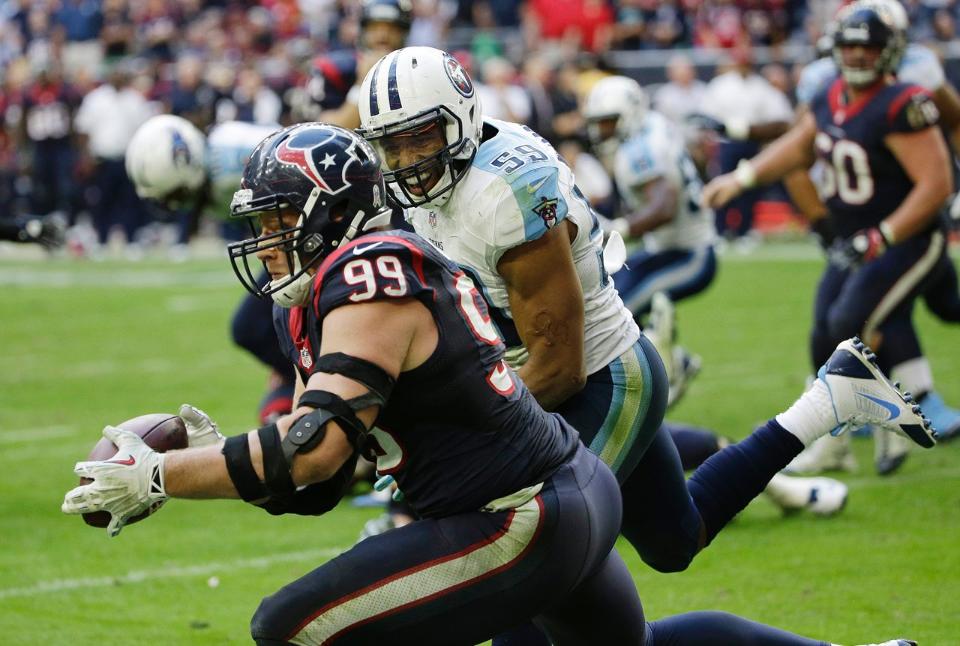 During this weekly write-ups, we typically look at teams in the upper and middle classes of the rankings.  Obviously that makes for the most intriguing story lines, as we're using this model to try and determine the long-term prospects of potential Super Bowl and playoff contenders.

But sometimes the also-rans deserve a little attention as well.  With 13 games in the books for every team, now looks like a good time to hit the pause button on the chaotic playoff races and take a look at some of the league's have-nots.  Not all of these teams are playing out the string—in fact, two still harbor realistic postseason hoptes—but all are currently in NFL purgatory with no clear path out.

Diving deeper into a quartet of these squads, let's take a look at what the numbers suggest about their respective futures.

These teams are powered by one or two All-Pros and not much else.


- Many like me consider football the truest team sport, but the Houston Texans are putting that notion to the test with a roster comprised of J.J. Watt and minions.  There isn't anything that can be said here about Watt that hasn't already been said.  In today's snap reaction world where everyone has an opinion, it's mildly astounding that no "J.J. Watt is #Overrated" movement has arisen on social media, which might serve as the most telling testament to Watt's greatness.  This EPA chart will also suffice: 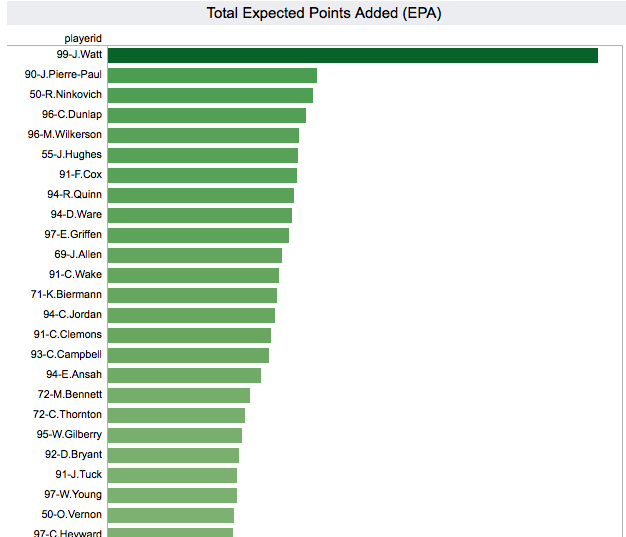 Moving on from Watt, the Texans have a promising passing game, which is impressive when considering the flotsam that has started at quarterback this season.  Houston ranks 11th in net yards per attempt (NY/A), AFA's measure of pass offense efficiency.  You're probably wanting to dismiss that because of Ryan Fitzpatrick's proclivity for turnovers, something the AFA model doesn't emphasize, but the Texans passing game also ranks 13th in Expected Points Added (EPA) per play and 15th in success rate.

Where Houston flounders is in Win Probability Added (WPA), in which they rank 26th and probably suffer from employing the erratic Fitzpatrick.  Fitz has long had an unusually big gap between his plain ole' yards per attempt and adjusted NY/A (ANY/A), which takes turnovers into consideration.  Since he became a semi-regular starter in 2008, Fitzpatrick has put up roughly average or better NY/A marks every season, but ranks just 21st in ANY/A among the 25 QBs with at least 50 starts in that span.

It's essentially a fact that the 32-year-old Fitzpatrick is the long-term answer at the game's most important position, which might leave the Texans looking at Ryan Mallett, should they choose to extend him beyond his expired rookie contract.  But there's virtually no sample size with Mallett, who started two games, one of which he played through with a torn pectoral.  For what it's worth, Mallett was essentially replacement-level—his 0.01 EPA/P would have tied him for 31st with Kyle Orton, while his 43.2 percent success rate would have ranked 34th, sandwiched between Derek Carr and Brian Hoyer.

So as you would probably expect, the rest of the Houston offense has largely picked up the burden in the passing game.  DeAndre Hopkins is emerging as the league's next great deep threat, averaging 17.0 yards per catch and on pace for 1,342 receiving yards in just his second season.  The list of second-year receivers who accrued that many yards per catch with at least 1,000 yards is littered with current stars and future Hall-of-Famers: 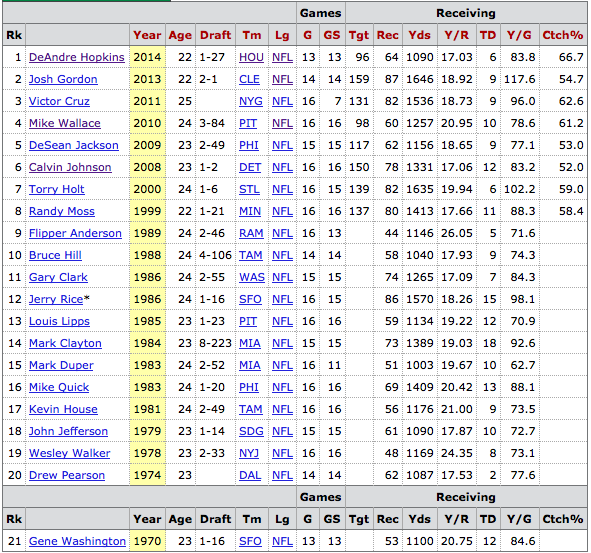 In addition, the Texans offensive line has made great strides in pass protection, ranking 11th in cumulative EPA after sitting 31st during last year's 2-14 debacle.  Right tackle Derek Newton has made big strides during his third season as a starter, while underrated interior linemen like Chris Myers and Brandon Brooks help form an underappreciated unit.

Ironically, apart from quarterback, Houston's greatest need is probably another front-seven playmaker.  Minus Watt, the Texans essentially employ the Falcons front seven—a traditional 3-4 with a lack of edge-rushers and an undersized linebacker corps.  Obviously first overall pick Jadeveon Clowney would be the Watt sidekick in theory, but Clowney's first season was marred by injury and apparent discord.  Even with Watt's 14.5 sacks, the Texans rank a meager 25th in sack percentage, illustrating the need for Clowney to fulfill the immense predraft hype.

Houston would likely be eliminated from playoff contention with a loss at Indy next Sunday, and the Texans probably aren't ready for January.  AFA ranks the Texans 18th overall, while Pro Football Reference's Simple Rating System (SRS) places the Texans 14th in the NFL and ninth in the AFC.  Quarterback is the clear-cut No. 1 priority for both Houston and every other team in this write-up moving forward, but unlike most teams, the Texans have the infrastructure and supporting cast to suggest that their two-year playoff drought could be snapped in short order.


- It's almost comical to consider now, but the Tampa Bay Buccaneers were among the trendiest preseason sleepers.  But after many predicted a return to the postseason for the Bucs, Tampa has instead imploded in the first year of the Lovie Smith era, to the point where they are now the front-runners for the top overall pick in the draft.

The defense has been an undeniable, which ranks 23rd by AFA's measures and 28th by SRS.  Gerald McCoy and Lavonte David stand out as All-Pro talents on an otherwise barren unit, but both may be out for the rest of the year with a dislocated kneecap and concussion, respectively.  Free-agent cornerback signing Alterraun Verner has not necessarily been a shutdown No. 1 CB, but he does rank tied for 11th at the position in total success counts with 27.

Still, the concerns about the unit are a bit overstated.  There have been whispers that the Bucs have been slow to pick up Lovie Smith's zone-heavy system, but Tampa has appeared to get over the learning curve hump in recent weeks.  Intuitively, it seems like the Bucs are one of the worst big-play defenses in the league.  However, that perception seems colored by historically bad pummelings at the hands of Atlanta and Baltimore, in which the Bucs gave up 104 points and eight passing touchdowns.

In reality, the Bucs have given up 13 pass plays of 30 or more yards, tied for 10th-fewest in the league.  Some of that is dictated by game situation—opponents are passing just 55.48 percent of the time against Tampa, fifth-lowest in the league, since they are usually ahead.  Still, after eye-popping incompetence over the first six weeks, the pass defense has regressed towards a more reasonable (albeit still streaky) performance level:

It shouldn't be hard for a defense with three premier talents to eventually become a reliable unit, especially when Tampa stops giving meaningful snaps to the likes of Crezdon Butler and Orie Lemon.  The offense, on the other hand, is essentially a dumpster fire, apart from promising rookie Mike Evans.  The two running backs who have received the bulk of the carries, Bobby Rainey and Doug Martin, would both rank among the 10 least valuable RBs in cumulative EPA if they had enough carries to qualify.  The O-line also ranks 24th in overall EPA, as the left side has been sabotaged by a trio of disappointing offseason additions in Anthony Collins, Logan Mankins and Evan Dietrich-Smith.

While the rest of the unit might need an overhaul, the quarterback position seems to warrant more discussion.  At first blush, it would seem safe to dismiss second-year prospect Mike Glennon.  Glennon's ANY/A over the past two years ranks a mediocre 24th out of 27 QBs with at least 16 starts, and this season, he ranks 38th out of 40 QBs in EPA/P.

But it seems unfair to judge Glennon based solely on those stats amid a dysfunctional supporting cast.  There haven't been many consistently promising signs from Glennon; however, unlike other recently drafted young quarterbacks in poor situations, he hasn't totally imploded: 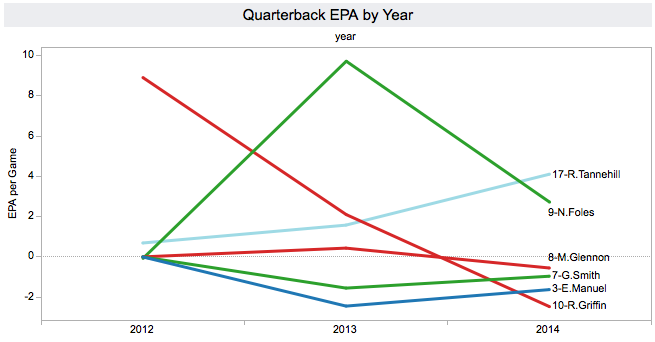 This isn't to suggest that Glennon is a long-term solution.  The fact that he sits well below Ryan Tannehill and Nick Foles in EPA, two quarterbacks with uncertain futures themselves, isn't particularly promising.  The underlying point is, like the rest of the team, Glennon is probably not as bad as the past two seasons have suggested.  The playoff hype was overstated and will remain so until the Bucs build some reliable depth, but it seems likelier that Tampa should be a below-average rather than horrendous squad.