Checking out a couple of imbalanced teams.


- Despite losing nearly every high-profile game this season, the Indianapolis Colts remain the second-highest ranked AFC team, and fourth overall in the rankings.  There's a big drop-off in GWP from the top three, but the Colts sit tied with the Seahawks with a 0.61 GWP.

The Colts arguably possess the most imbalanced offense in the league, as Indy ranks third in passing EPA/P and 20th in rushing EPA/P.  However, that ranking is buoyed by Ahmad Bradshaw's per-touch explosiveness.  With Bradshaw out for the season with a broken ankle, Trent Richardson and Daniel "Boom" Herron have combined for -15.2 total EPA, a number that would easily be the worst in the league if combined into a single defective running back.

Fortunately for the Colts, Andrew Luck's 7.6 net yards per pass attempt gives them the second-ranked passing game by AFA's efficiency standards.  It's virtually impossible to be bad with that much of a boost, as just two teams in the last 30 seasons have missed the playoffs with that NY/A: 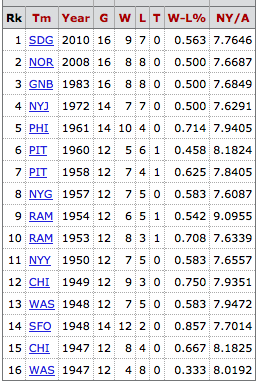 Still, this looks like a familiar formula for the Colts, who have struggled to provide Luck with sufficient help in any other unit.  If Vontae Davis' concussion lingers, it is very possible that every Indy unit besides quarterback, wide receiver and tight end is significantly below average.  Against all-around juggernauts like the Patriots and Broncos, that simply won't cut it.


- Quietly, the Buffalo Bills have entered AFA's top 10 after consecutive wins over the Jets and Browns.  That's biased by their stingy defense, which the model ranks as the league's second-best, as the 26th-ranked offense places a pretty firm ceiling on the Bills' potential.

If Buffalo misses the playoffs, it will most likely be due to their deathly schedule, which includes a terrifying troika of games against Denver, New England and Green Bay.  It's hard to envision the Bills finishing with more than eight wins by season's end, but that would still be their first non-losing season since 2004.

However, it's interesting to see the upper-third rankings populated by teams with poor offenses but excellent defenses.  The Bills, Niners, and Chiefs all have defenses ranked eighth or better carrying offenses ranked 18th or worse.  It might seem strange that all three of those teams are in the top 10, but other metrics seem to agree with AFA.  FO has the entire trio at 12th or better in DVOA, while PFR has them all 14th are better in SRS.  Conversely, more conventional power rankings like ESPN and CBS have all three outside the top 10.

Obviously the goal of these metrics is not to blindly agree with the mainstream public.  However, I wonder if advanced stats should weigh defense less in their models.  This is simply spitballing, and there's the obvious question of where one would draw the line.  Still, while offense already has more to do with winning than any other unit, it's fair to wonder if the additional rule changes have tilted the scales even further.


Here are the updated team efficiency rankings after 11 weeks.  As always, observations, questions and snide remarks are welcome in the comments section.