A look at two teams whose early-season luck may be running out.


- Probably the most controversial team in these rankings all year has been the Arizona Cardinals.  Despite holding at least a share of the top seed in the NFC every week this season (!), the Cards have never risen into the upper half of AFA's rankings.  Now having lost two straight, Arizona's once impregnable hold on a playoff spot suddenly appears shaky.

In fairness, AFA hasn't been totally prescient about the Cardinals, who have suffered from poor injury luck.  But while many will put the blame on Drew Stanton for Arizona's recent offensive woes, it's interesting to see that the Cards' passing game has been perfectly fine on a per-play basis.  Since Carson Palmer went down with a torn ACL, Arizona ranks sixth in the NFL in net yards per pass attempt (NY/A), the metric this GWP model uses to measure passing efficiency.

That's partially a byproduct of Bruce Arians' big-play passing system, however, as Stanton also has five turnovers in the last three games, leading to a meager 6.0 adjusted yards per attempt (AY/A) mark in that span.  For reference, that would have him tied for 31st with Josh McCown if extrapolated to the entire season.  Using EPA, we can see that Stanton has been decidedly below average the past two weeks, both Arizona losses:

However, it would also be folly to suggest that the quarterback change is the only reason for Arizona's post-Palmer struggles.  It's quite possibly the result of a small sample size, but over the past two games, the Cardinals' pass defense has put up its worst stretch since early in the season:

There are a few ways we can read this.  Besides the small sample size caveat, the one truly heinous performance was essentially the result of Patrick Peterson getting toasted by Julio Jones.  While one would expect better from Peterson, losing a one-on-one against Jones is hardly reason for long-term concern.

On the other hand, Seattle is not even in the top half of the league in terms of pass EPA/P, and both games were on the road, continuing a troubling trend for the Cards.  Arizona is conceding 7.2 yards per attempt on the road, compared to just 6.3 at home.  The former mark would rank 23rd in the league, while the latter would rank tied for ninth.

Every team has splits of some sort, but with Tyrann Mathieu likely to miss most of the regular season with a broken thumb, Arizona is also missing its most versatile playmaker on the back end.  In addition, the likes of Andre Ellington, Larry Fitzgerald and Jared Veldheer are all playing through nagging injuries, potentially robbing the offense of arguably its three best players.

Regardless of how their season finishes, it will always be curious why Arizona didn't rank higher over the first three months of the season.  However, with the fifth-toughest remaining schedule, according to Football Outsiders, the Cards' record may soon bear a closer resemblance to their middling ranking.


- At a casual glance, the Pittsburgh Steelers look like the most inscrutable team of the 2014 season.  The Steelers have struggled and/or lost to also-rans like the Bucs, Jaguars and Jets, while also demolishing ostensible contenders like the Colts and Ravens.  Fittingly, Pittsburgh sits in the six-team 7-5 mosh pit in the AFC.

After a historic 12-touchdown run over two games, Ben Roethlisberger has sunk back to more mortal levels.  However, Big Ben has regressed beyond the mean, as his 6.32 AY/A average over the past three games is well below his career average of 7.7, or the 7.6 mark he posted through the first seven weeks, before the whole touchdown madness began.

Moving forward, it seems reasonable to expect Roethlisberger to return back to the happy medium he enjoyed the first two months of the year.  Pittsburgh faces a slightly difficult schedule for pass defense, with three games against the fourth-ranked KC pass D (based on EPA/P) and the 11th-ranked Cincy D (twice) remaining in the final month.  However, the Chiefs game is at Heinz Field, while Roethlisberger will also get to feast on Atlanta's 29th-ranked pass defense.

The real issue is the defense, where legendary coordinator Dick LeBeau has been hamstrung by a combination of age and poor depth and overall athleticism.  The quartet of Brett Keisel, Troy Polamalu, Ike Taylor and James Harrison have occupied or currently hold crucial roles on the Pittsburgh defense this year.  That's a combined age of 139 on the field (#advancedstats).  This has all manifested itself into some inconsistent (and increasingly poor) results:

Keisel is now out for the year, while Taylor just returned last week from a broken forearm that sidelined him since Week 3.  The problem is that the youth brigade has forced those veterans into outsized roles.  Uber-athletic linebackers Ryan Shazier and Jarvis Jones have been plagued by injuries.  Free-agent signings Mike Mitchell and Cam Thomas have been disappointments.  Worst of all, Cortez Allen has played his way into the deepest depths of Mike Tomlin's doghouse, as the once-promising corner hasn't played a snap since Week 8.

It's really quite difficult for a defense to shackle an offense gifted with Roethlisberger, Le'Veon Bell and Antonio Brown as a core trio.  Bell and Brown have arguably been the best running back and wide receiver in the league this year, as both lead their respective positions in EPA.  The Steelers average 6.0 yards per play, fifth-best in the league.  Recent NFL history suggests that less than one team per year misses the postseason averaging that many yards per play: 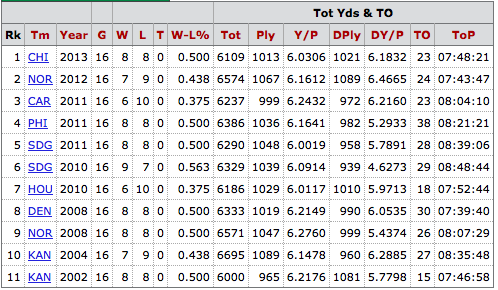 I put the cut-off point at 2000, but in actuality, no team between 1987-2001 missed the postseason with that Y/P average.  The Steelers are in serious jeopardy of joining that list, however, based on their inability to string together a consistent month the entire season.