Two teams will face a stretch of games against fellow postseason contenders.


- Because of the strength of the AFC's middle class, the 7-4 Baltimore Ravens are currently out of the postseason.  However, with a pair of games against the Chargers and Dolphins the next two weeks, Baltimore will have the greatest say on the AFC's playoff picture of any team in the conference.

The Ravens' two-spot rise was actually the third-highest upward move of the week, behind the three-spot move from Buffalo and Minnesota.  Unlike those teams, though, the Ravens harbor excellent playoff chances.  Football Outsiders pegs Baltimore's likelihood of reaching the postseason at 69 percent, a mark exceeded only by New England, Indy and Denver among AFC teams.

Though AFA ranks Baltimore as a slightly above-average offense and defense, the latter unit is quickly rounding into one of the league's more underrated all-around attacks.  The notoriously erratic Joe Flacco hasn't quite replicated his incendiary 2012 postseason run, but Gary Kubiak's system has clearly stabilized his game.  Flacco's 17.6 percent deep-ball attempt percentage is by far the lowest of his career, well below his 23.2 percent career rate, but he is also on pace to set career-highs in QBR and adjusted net yards per attempt (ANY/A) while also lowering his interception rate.

This is emblematic of the improvements Stafford made under Lombardi, except that Flacco has sustained his success.  Flacco ranks seventh in EPA/P and eighth in success rate, but strangely, just 18th in Win Probability Added (WPA) per game.  Indeed, he has produced less WPA than one would success given his EPA production: 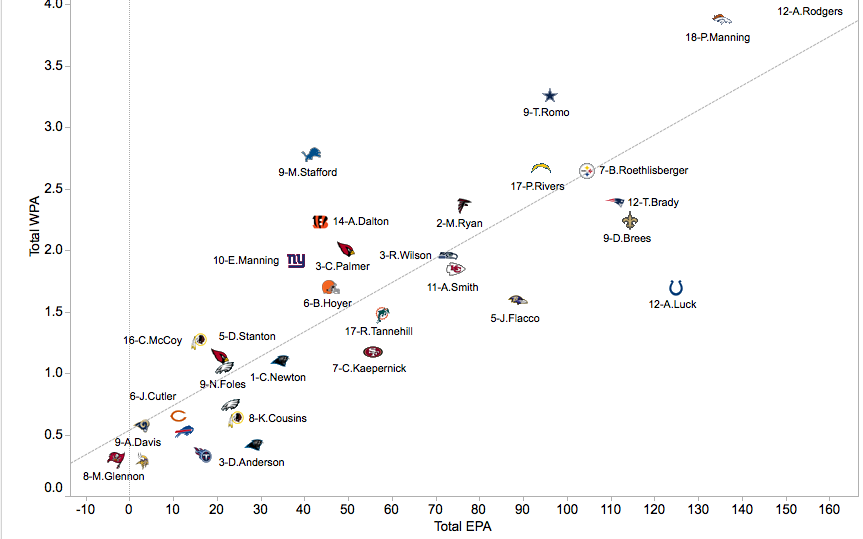 Given that the whole purpose of playing is to win the game, this is a troubling trend, albeit one that should correct itself.  Flacco hasn't necessarily been bad in situations where WPA is particularly volatile—he ranks 15th in passer rating during one-possession fourth-quarter situations, and ninth on third and fourth down.  Regression to the mean should help out the offense there.

That's good, because the pass defense is probably going to sink quite far the rest of the season.  Jimmy Smith's season-ending injury was a death blow for an already thin secondary, one that is now relying on Danny Gorrer, Anthony Levine and Tramain Jacobs at corner.  No, none of those names were made up.  The blow is somewhat lessened by Baltimore's reliance on safeties in nickel and dime packages, but since Smith's Week 8 injury, things have gone downhill:

Baltimore's pass defense is now essentially entirely pressure-reliant.  That's not a bad to bank upon when one can rotate the prolific pass-rushing trio of Terrell Suggs, Elvis Dumervil and Pernell McPhee, but as the Lions have shown, things can plummet quickly against an offense that can block.

This could be especially problematic against Philip Rivers and Ryan Tannehill the next two weeks.  The Ravens are quite possibly the best all-around squad of the teams battling for the AFC wild card slots, but their greatest weakness does have the possibility to submarine them in those two critical contests.


- The AFA rankings have seen the Philadelphia Eagles as a perpetually overrated team this season.  Despite a considerable climb over the past month, the Eagles have fallen back to 16th over the past two weeks.  Even at 8-3, a brutal three-week stretch against Dallas, Seattle and Dallas again leaves Philly in a precarious position.

Mark Sanchez, of course, is probably the greatest impediment to the Eagles' playoff hopes.  In four games, Sanchez ranks 27th in EPA/P, but he does rank a robust fifth in net yards per attempt, the stat used to determine passing efficiency in this model.  Indeed, given the low bar Nick Foles set over the first seven-plus games, Sanchez has actually been an upgrade:

However, that does not mean the Eagles are capable of winning with subpar quarterback play the whole season.  While Chip Kelly's high-efficiency system typically limits mistakes, Foles ranks fifth in interception percentage, while Sanchez would rank fourth if he had enough passes to qualify.  The AFA passing metrics diminish the impact of turnovers, which are typically fluky and variable, but given Sanchez's 3.7 percent career interception rate over 2,013 regular-season attempts, there is probably enough evidence to suggest that the turnover rate is going to keep up.

Still, the Eagles offense is still functional with the ex-Jet at the helm, as the Eagles rank ninth in yards per offensive play over Sanchez's three starts.  A bigger issue may be the pass defense, which has been a literal roller coaster this season:

Starting corners Bradley Fletcher and Cary Williams have embodied that inconsistency, while injuries to mobile middle linebackers DeMeco Ryans and Mychal Kendricks have robbed the Eagles of their best coverage linebackers throughout the season.  Kendricks is back in the lineup now, but Ryans is out for the season, forcing inexperienced players like Emmanuel Acho and Marcus Smith into prominent (and likely excessive) roles.

The Eagles' secondary is far from the hopeless situation in Baltimore, but like the Ravens, Philly is left largely dependent on a deep pass rush.  The Eagles don't have anyone with the star power of Suggs or Dumervil, but the likes of Connor Barwin, Vinny Curry and Brandon Graham (unofficially known as #FreeBrandonGraham) have emerged as quality edge-rushing options.

Again, it's hard to reconcile Philly's ranking with their record or their individual units.  The Eagles are average or better in every single passing and rushing unit, and while there's nothing that has stood out as particularly extraordinary, that would still seemingly suggest a team better than a 0.52 GWP.  Philly's schedule adjustment strength will receive a nice boost over the next month, however, so if they continue to win games, the puzzling ranking will rectify itself.