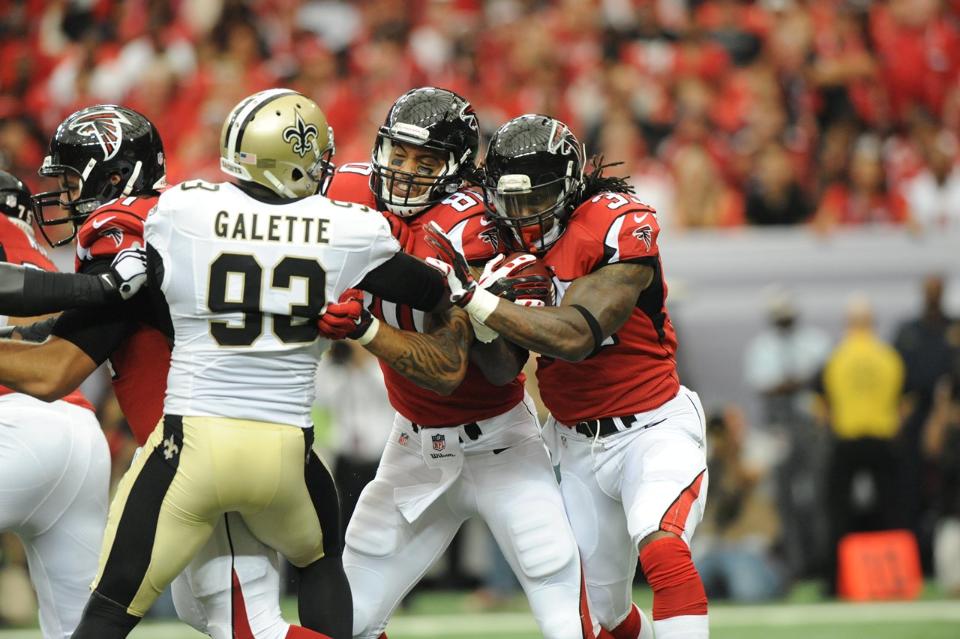 The rankings saw some pretty significant shifts after Sunday's action, as things are beginning to normalize after a few wonky weeks.  Many observers will be relieved to see where New England and Washington are ranked this week, while Denver's lead as the clear-cut leader has shrunken significantly.

We'll get to some of the top contenders during the risers/fallers portion, but this week's most interesting cases sit at the bottom.  We haven't given much attention to the league's have-nots during these weekly looks at the rankings, as this already lengthy piece doesn't need to spill more ink trying to explain the myriad issues with Oakland and Tampa Bay.  However, this week, there are a pair of 4-6 teams sitting in the bottom six whose cases deserve more attention.

Let's kick off this week's rankings with a look at two squads who are total opposites in roster construction, short-term expectations and long-term hopes.

Are these two NFC teams really as bad as their ranking would suggest?


- The NFC South may go down as one of the worst divisions since the 2002 realignment, but the Atlanta Falcons are hardly complaining.  Perhaps the embodiment of the division's futility, the Falcons are 4-0 with a plus-57 point differential against fellow South rivals, but 0-6 and minus-74 against the rest of the league.

Consequently, Atlanta comes in at 30th in this week's rankings.  That's probably a bit lower than what the mainstream would suggest, but no one is calling the Falcons anything besides a bottom-10 team.  Entering Week 11, FiveThirtyEight had the Birds 25th in Elo, while Pro Football Reference currently has them 24th in Simple Rating System (SRS).

The issues obviously start on defense, where Atlanta ranks last in overall efficiency.  The Falcons are conceding 7.7 net yards per attempt, worst in the league, and rank 31st in passing Expected Points Added (EPA) per play.  The issue isn't with the secondary, which boasts some exciting talent with budding second-year corner Desmond Trufant and underrated veteran safety Dwight Lowery, but rather the pass rush.  Atlanta ranks 30th in sack percentage and 27th in Pro Football Focus' cumulative pass-rushing grading metrics.

The Falcons are closer to league-average against the run, which in itself is probably a disappointment, given that they splurged in free-agency on old-school two-gapping linemen Tyson Jackson and Paul Soliai.  Neither plays even half the defensive snaps, leaving one to wonder if the Falcons should have reallocated their resources towards more pass-rushing talent to complement Kroy Biermann, Jonathan Massaquoi and the ageless Osi Umenyiora.  Atlanta has essentially had the same team every year of the Matt Ryan era, and this rendition figures to lump itself in with the rest of the masses: 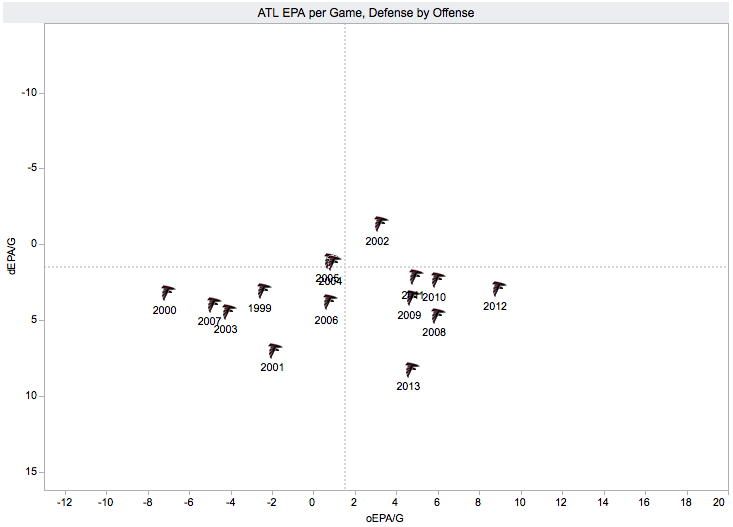 Of course, that hasn't always been a bad thing.  Though everything went wrong in last year's 4-12 debacle, the Falcons' .604 regular-season winning percentage in the Ryan era is seventh-best in the league over that span.  Judging Atlanta harshly based off a lack of postseason success is overreacting to a small five-game sample size, as the Falcons had been a consistent top-10 team until last season.

Poor competition wouldn't be the only reason if Atlanta returns to the postseason in 2014.  After a wretched 2013, Ryan's numbers have largely bounced back to their career norms.  However, one could argue that 2014 is even more impressive than Ryan's best statistical year in 2012, given that A) Tony Gonzalez is retired, B) Rookie Jake Matthews has been the league's worst left tackle, and C) The Falcons are down to third-stringers at center and right tackle.  And yet, Ryan has made 2013 look like a flukish outlier, despite a supporting cast as bad as the one he had last season: 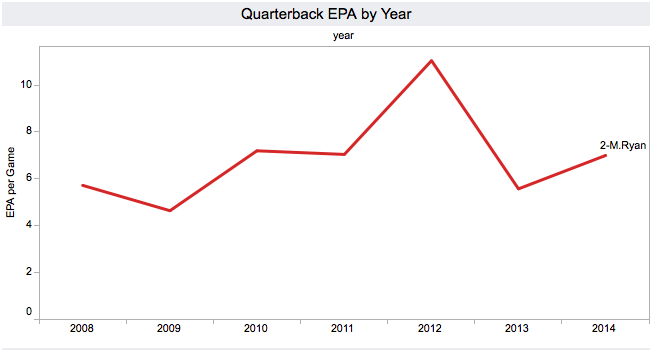 Atlanta's passing game is the only above-average pass or run unit on the team, as Ryan is almost literally carrying the Falcons on his own (along with Julio Jones and Roddy White).  The corpse of Steven Jackson has led Atlanta to a 35.3 percent success rate, fifth-worst in the league, though surely some of that is attributable to the offensive line's injury woes.  The defense does rank eighth in takeaways per game, though that hardly seems sustainable without a consistent pass rush.

This heavily imbalanced roster is essentially the byproduct of poor drafting.  Of the 100 best seasons since 2008 by players within their first three years in the league (based on Approximate Value), the Falcons have produced just three—two from Ryan and one from Jones.  That last sentence may have been a bit confusing, so here's the Cliff's Notes version: None of Dimitroff's draft picks have made an immediate impact besides Jones, who of course cost the farm the get in the first place.

It's certainly possible to have success with a stellar passing game, turnovers and little else—the 2011 Patriots will always be the paradigm for that—but at best, the Falcons are probably a homeless man's version of that New England team.  A division banner could make Atlanta the reincarnation of the 2010 Seahawks; per usual, the Falcons are exhibiting massive home-away splits, both offensively and defensively.  But like that Seahawks squad, Atlanta or whoever else stumbles backwards into the NFC South crown will likely be remembered as one of the worst playoff squads in recent memory.


- Atlanta may earn a short-term reward in the form of a postseason berth, but the St. Louis Rams have a far more promising long-term outlook.  Though the 4-6 Rams are likely too far behind to make a serious postseason run, there is reason to believe St. Louis could soon exploit the long-term uncertainty surrounding the other NFC West teams—provided, of course, they find a solution at the game's most important position.

With the seemingly inexhaustible haul from the RG3 trade finally complete, the Rams have built one of the game's most promising young defenses.  St. Louis' defense still ranks just 24th overall, largely due to a disturbing propensity for secondary breakdowns and the early-season pass-rushing drought.  However, it's plain that the pass defense is on a huge upward climb, culminating in arguably the season's best performance on Sunday, when they limited the Broncos to their lowest point output of the Peyton Manning era:

Robert Quinn and Aaron Donald have the potential to become the league's best inside-outside pass-rushing tandem.  The rookie Donald has been particularly impressive, as he is tied with Buffalo's Marcel Dareus for most tackles for loss among defensive tackles, despite receiving limited snaps early in the season.  Behind them, Alec Ogletree is quickly turning into Lavonte David 2.0, compiling the 10th-highest EPA per game mark of all linebackers.  Though he does not receive much pub, Ogletree could join Quinn as this defense's biggest name, as he has harnessed his rare athleticism to evolve into an all-everything linebacker who can impact a game by blitzing, dropping into coverage or providing sideline-to-sideline tackling range.

Of course, that's only one side of the ball, and St. Louis has significantly more questions on offense.  The Rams have missed on a plethora of wide receiver draft picks over the past few years, and while Tre Mason and Benny Cunningham look like a promising young foundation at running back, many were saying the same thing about the currently bench-ridden Zac Stacy at this time last year.  The ever-changing offensive line continues to struggle, as the interior will soon need solutions beyond uninspiring veterans Davin Joseph and Scott Wells.

However, all that pales in comparison to the catastrophe St. Louis has experienced at quarterback over the past decade.  Marc Bulger made the Pro Bowl in leading the Rams to the playoffs during the 2003 season.  Since then, this is the season-by-season luck the Rams have had at the position (min. 4 starts):

Bulger had a couple more above-average seasons, even leading an 8-8 Rams team to a playoff win (that 2005 Rams squad somehow earned the No. 5 seed in a historically weak NFC).  Since then, it has been avert-your-eyes-not-suitable-for-children bad at the position.  In that 2004-14 time span, St. Louis' cumulative 5.6 net yards per attempt ranks 28th in the league.

Austin Davis showed brief glimpses of promise, but as one of just 11 quarterbacks with a negative EPA/P this season, he is likely not the long-term answer.  Sam Bradford is not coming back at his $16.6 million cap figure for next season, and even if he does restructure, the Rams are almost certain to bring in competition for the starting job.  More likely, St. Louis will just cut him and take the $13 million cap savings.

Quarterback instability is arguably the primary reason the Rams have yet to translate their young talent into double-digit wins.  Last year, Football Outsiders ranked St. Louis 31st in DVOA variance, meaning that the Rams were the league's second-most inconsistent team.  This season, FO has St. Louis 19th, though that may rise with the updated rankings after the Denver win.

The Rams are likely going to win too many games to land a premium draft pick, but it remains tantalizing to think what this team would turn into with consistently above-average quarterback play.  St. Louis will continue floundering near the basement of these rankings due to the model's emphasis on passing offense, but with a rapidly improving defense, one wonders if the Rams could experience a Cardinals-like breakout with even an adequate passing game.