After some uproar from the commenters last week, the this week's rankings experienced some small shifts towards the public consensus.  Teams like Washington and the Bengals are beginning their descent down the rankings, while others like the Eagles and Cardinals continue to inch their way up.

Of course, there are still plenty of questionable placements, and the contrast can be especially striking when there is a wide chasm between two teams with seemingly similar makeups.  For instance, there are two teams this week with similarly shiny point differentials and win-loss records, as both look like legitimate Super Bowl contenders in their respective conferences.  And yet, one sits in the top three, whereas the other continues to flounder in the middle of the rankings.

Our look at the Week 10 version of the rankings will start with this pairing that many view as a potential Super Bowl XLIX matchup, examining whether either or both should be considered favorites in their conference.

Two model franchises look like they're peaking, but why is only one ranked highly?


- During a season in which most top NFC contenders have taken a step back, the Green Bay Packers have established themselves as potential favorites.  The third-ranked Packers are the top-ranked NFC team this week, though amazingly, Green Bay would actually be at home if the postseason started today due to tiebreakers.

That quirk should be temporary, however, as the Packers have won five of six since Aaron Rodgers' famous R-E-L-A-X radio comments.  It's not really necessary to wax poetic about Rodgers, who leads the league in Expected Points Added (EPA) per play and adjusted yards per attempt.  Green Bay's passing game is a known commodity that represents one of the league's best units on either side of the ball.

Where things have really changed for Green Bay this season is on defense.  While the Packers are not exactly a lockdown unit, they rank 12th overall this week, led by the seventh-ranked pass defense in terms of EPA/P.  Even with a defense that is only slightly above-average, that would be a significant upgrade from the slipshod units the Packers have rolled out in recent seasons, as Green Bay has saddled Rodgers with a clearly below-average defense each of the past four seasons: 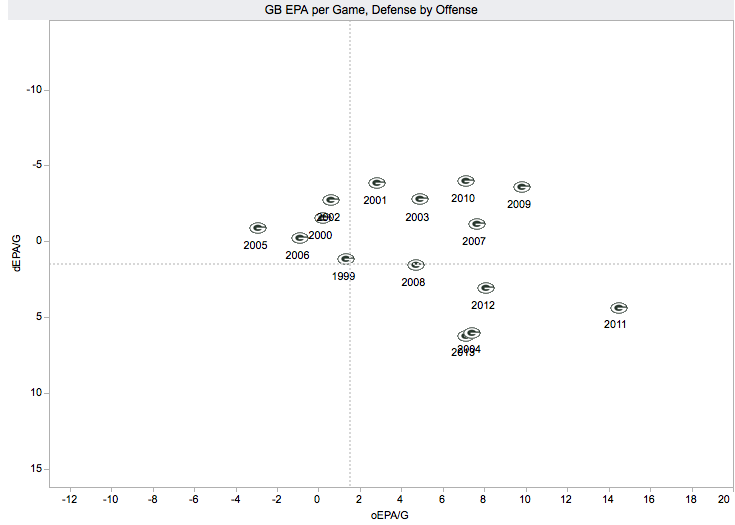 Part of the Packers' success defending the pass stems from a 3.8 percent interception rate, third-highest in the league.  But the personnel also received a decided upgrade this season.  After playing just three games last season, Casey Hayward has returned to resume his maturation into one of the league's elite slot corners.  First-round rookie Ha Ha Clinton-Dix has provided sorely needed deep-half range at safety, while Tramon Williams and Morgan Burnett have elevated their games after shaky 2013 campaigns.  Indeed, apart from a poor showing in the Superdome, the pass defense has largely been excellent since opening day:

Looking solely at the passing-related units, the Packers No. 3 ranking makes total sense.  However, Green Bay also appears hellbent on testing the limits of the theoretical irrelevance of the running game.  The Packers rank 31st in defensive run success rate and 20th in offensive rushing EPA/P.  The offense's success rate is a respectable ninth due to red-zone success—Green Bay ranks second in yards per attempt and ninth in touchdowns in that area, which is prone to big EPA spikes—but that's hardly something to hang one's hat on.

Eddie Lacy's counting stats are also down, but in reality, the burly back is a mostly inefficient runner who relies on volume.  Lacy's EPA/P and success rate are virtually identical to last season's totals; Football Outsiders has also given the ex-Alabama bruiser lukewarm DVOA ratings his first two seasons in the league.

In more traditional stat terms, the Packers average 4.0 yards per carry while conceding 4.6 yards per attempt to their opponents.  That's typically been a deathly combination, as just 14 teams since the 1970 merger have made the postseason with those numbers.  However, the combination becomes much more palatable once we see the skewed timeframe of that stat: 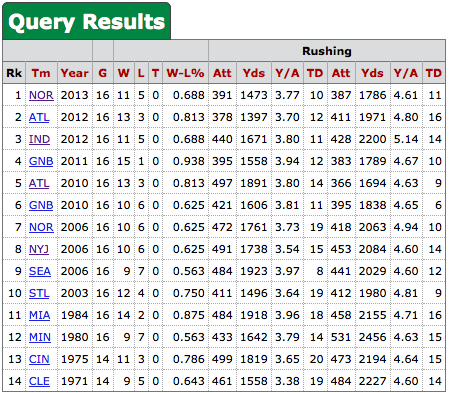 Nine of those 14 teams have come since 2006, and at least one team has made the playoffs with that combination every year since 2006.  Moreover, even if the Packers remain a poor rush-based team, there's reason to believe that personnel adjustments at linebacker could improve some of their defensive woes.  Green Bay's middle linebacker albatross of A.J. Hawk, Jamari Lattimore, Brad Jones and Sam Barrington has been awful in run support.  This is especially problematic for a traditional 3-4 scheme like the Packers, where defensive linemen two-gap to occupy linemen and allow the linebackers to fill in the gaps behind them and make tackles.  Green Bay has been deficient in that area all season, and change probably isn't going to make things any worse.

It's probably impossible for a team to have a quarterback play as well as Rodgers has and miss the playoffs (so long as the QB stays healthy), a hypothesis the Packers have been testing for years now.  But Green Bay has flamed out in the playoffs the last two seasons against power-running 49er teams, so while the Packers should continue racking up wins, it's worth keeping an eye on their persistent ground game flaws.


- Like Green Bay, the New England Patriots have overcome a rough start to emerge as top Super Bowl favorites from their conference.  Football Outsiders only projects a 1.8 percent possibility of a Patriots-Packers matchup in Glendale this February, but current Vegas odds project them as two of the top three favorites to reach the Super Bowl, with only Denver receiving lower odds.

Nevertheless, the Pats currently sit 16th in this week's rankings, with a 0.51 Gross Winning Percentage (GWP) that suggests an almost exactly .500 team.  It's tempting to explain away that modest ranking by pointing to New England's inconsistent opening month.  However, the Pats have only had one big jump, from 27th to 19th after their Week 5 win over the Bengals, and have remained 15th or 16th every week since Week 7.

There are a few reasons for this, and none of them have to do with Tom Brady.  Brady is already up to sixth in both EPA/P and success rate despite his an opening month that had some clamoring for rookie Jimmy Garoppolo.  Brady will cool off a bit.  His current run, during which his adjusted yards per attempt since Week 5 is 9.73, is reminiscent of a similar stretch he had from Weeks 8-11 of the 2012 season, in which he posed an almost identical AY/A of 9.74.  The rest of that regular season, Brady's AY/A fell back to 7.73, exactly in line with his 7.7 career average.

Still, even a slight dip will have Brady performing at the level of a top-five quarterback.  New England's running game possesses a league-average 41 percent success rate, which is probably what one would expect from a Shane Vereen-Jonas Gray platoon.  So long as Rob Gronkowski—the league's most frequently targeted tight end at 22.1 percent—remains healthy, the Pats offense should remain among the league's five or 10 best moving forward.  The Week 5 turning point against Cincy was the first time Gronk played over 62 percent of the snaps, and it's not hard to see the massive effect he has had at full speed:

Thus, you can probably see where I'm leading this discussion, as the defense has more questions than many perceive.  Though the defense ranks a respectable 15th overall in efficiency, the unit ranks just 27th in success rate on an opponent-adjusted basis, based on AFA's metrics.  FO sees similar benefits, rating New England's schedule as the fifth-easiest so far based on opposing offensive DVOAs.

It's hard to measure exactly why this Pats defense is not more consistent.  We think of Bill Belichick's squads as highly professional and consistent performers, but the defense has yet to put together an above-average run and pass performance against meaningful competition.  Except for games against the Vikings and rapidly imploding Bears, the Pats defense has not had a negative pass and run EPA in the same game this year (note that negative EPA is good for defenses, since they want to limit the opposition's expected point production):

If you want to search for good news, that upward trend in run success rate is encouraging for a defense missing front seven stalwarts Jerod Mayo and Chandler Jones.  The Pats' 50.6 defensive run success rate is still fifth-lowest in the league, but some schematic adjustments and improving health have aided that improvement.  New England will get back starting nose tackle Sealver Siliga from short-term injured reserve, an underrated return that should relieve some stress from indefatigable veteran Vince Wilfork.

One final reason for New England's low ranking is a pair of quirks that have made the Patriots a statistical outlier.  Since 2001, the Patriots hold a .677 winning percentage in one-possession games, an absurd mark that ranks behind only the Colts in that time span.  Additionally, the Pats' plus-154 turnover margin since 2001 is more than double the second-best in the league, as New England is unfathomably consistent in that traditionally fluky stat.

Sure enough, the 2014 Pats are 2-0 in one-possession games and lead the league with a plus-12 turnover margin.  The model does not realize that this is somehow uniquely sustainable in Foxboro, and therefore does not place much weight in those advantages.  Even with a wildly fluctuating defense and likely regression in the passing game, the Pats remain the most bankable team in the league due to their remarkable execution and consistency in critical game situations.