Is there hope for the bottom-feeders?


- The Jacksonville Jaguars have been one of the most talent-deprived teams since Gus Bradley took over in 2013.  Nonetheless, the winning foundation needs to start somewhere, and it appears the Jaguars have found theirs through defense and discipline.

Given Bradley's background as the Seattle defensive coordinator, it's hardly surprising that defense would be the first area of significant improvement for Jacksonville.  The Jags rank eighth in sack percentage this season, headlined by budding young Pro Bowl defensive tackle Sen'Derrick Marks.  As a whole, Jacksonville's defense ranks 15th in pass defense success rate and eighth in run success rate.  Considering that the Jaguars have lost their two most reliable veteran starters in Paul Posluszny and Alan Ball to season-ending injuries, that step forward is quietly impressive.

Jacksonville also refuses to beat itself, except in areas where inexperience can't help it.  The Jags are the least-penalized team in the NFL, and their 1.2 percent offensive fumble rate is second-best in the league.  Jacksonville does have the highest interception rate, largely because of Blake Bortles' growing pains, but that's virtually inevitable when starting a raw rookie quarterback.

This is still a barren roster, one whose highest upside may have been four or five wins this season.  However, while Bortles' development and future drafts will play the largest role in determining how soon the Jags are postseason-relevant again, Bradley appears to have a promising foundation in place.


- Two weeks ago, I inscribed a pessimistic view on the Minnesota Vikings, noting the historic beating Teddy Bridgewater was taking based on sack rate.  Nothing on the offensive front has changed—Bridgewater's 85 Sack % Index is still third-worst among QBs with at least four starts—but this time, it's the Vikings defense that warrants recognition.

Much like Bradley, new head coach Mike Zimmer has taken his background as the Cincy defensive coordinator and translated it into results.  Behind a droolworthy foundational quintet of Anthony Barr, Everson Griffen, Sharrif Floyd, Harrison Smith and Xavier Rhodes, Minnesota has surged to seventh overall in defensive efficiency, demonstrating a clear improvement over the past month: 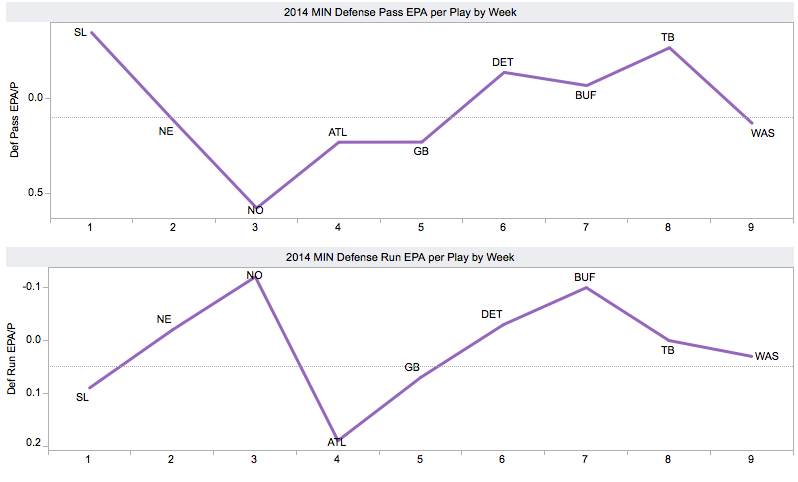 As the five aforementioned players show, the Vikes have drafted well on defense in recent years.  However, savvy free-agent shopping has also aided the cause.  In inking Captain Munnerlyn, Linval Joseph and Tom Johnson, Minnesota has found valuable niche players, the type of above-average contributors who are as essential to filling out a top-notch defense as starry Pro Bowlers.

There's still the small issue of, you know, the offense.  Cordarrelle Patterson and Matt Kalil have regressed to concerning levels, and waiting for young quarterbacks to develop equates to parking the offense in purgatory.  Nonetheless, Minnesota is not that far away from contending, and a top-10 defense will likely anchor the next Vikings team that reaches the postseason.


- As the league's last winless squad, the Oakland Raiders have finally sunken to the rankings basement.  Considering that Tampa Bay has suffered arguably the season's two most lopsided losses, that's an especially ignominious feat.

The Raiders are as bereft of hope as any team, and it was extremely tempting to simply paste GIFs of Khalil Mack into this space.  Nevertheless, the real hope for Oakland likely hinges upon Derek Carr's development.  Though his competition level is low in an unspectacular rookie class, it seems clear that Carr has been the best and most consistent quarterback to come from the 2014 draft: 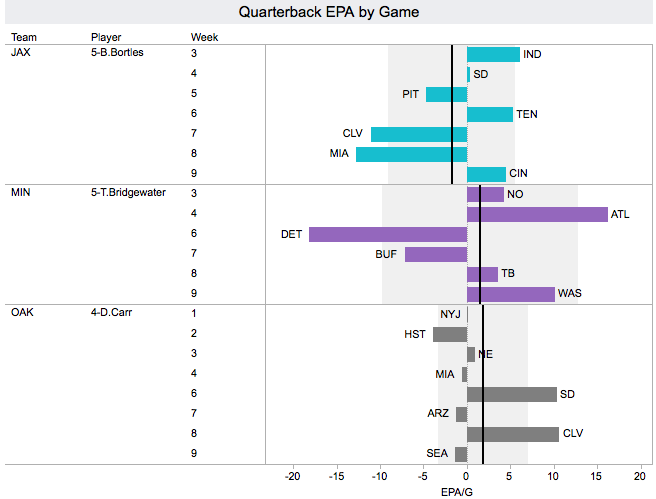 Oakland has opened the playbook for Carr more than Jacksonville and Minnesota have for their rookies, and the Fresno State product has rewarded them with surprisingly refined pocket presence and deep-ball accuracy.  Carr's adjusted net yards per attempt metric currently sits at 5.27, and the list of rookie quarterbacks to have reached that mark is rather promising.

If you click on the link, there's only 12 players since the merger who have had that ANY/A.  The worst player on that list is probably Charlie Batch, though Robert Griffin III and Andy Dalton may lower the bar a bit.  Still, there's not one bonafide bust in that group.  The Raiders have been a wretched organization playing in an even worse stadium, but Carr might finally represent the solution to the Curse of Rich Gannon.


Here are the updated team efficiency rankings after nine weeks.  As always, observations, questions and snide remarks are welcome in the comments section.