- Pittsburgh's Sunday night opponent, the Baltimore Ravens, sat at 5-2 two weeks ago.  Facing a chance to place an early stranglehold on the AFC North, the Ravens have since dropped two consecutive division games, and have tumbled to 15th after a brief stay in the top 10.  The Week 8 loss to the Bengals was particularly painful—Baltimore had an 83 percent win probability with just under four minutes left, but will now lose any tiebreaker to Cincy, having been swept this season.

Sitting in last place, there is likely a mild sense of panic around Charm City.  However, there are signs that the Ravens' two-game skid may represent a small dip rather than a long-term downswing.  Joe Flacco has been undeniably woeful the past two weeks, averaging a putrid 5.1 adjusted yards per pass attempt, a mark that would rank ahead of only Blake Bortles and Geno Smith this season.  Even with those two poor games, however, Flacco is still putting up career-best EPA/P and success rate numbers:

Indeed, Gary Kubiak's zone- and play-action tendencies have been a boon to the Baltimore offense.  The running game is back to a roughly league-average 41.3 percent success rate after experiencing its first two negative EPA games over the past three weeks against the Steelers and Falcons.  But with left tackle Eugene Monroe and left guard Kelechi Osemele just returning to the lineup, the ground game should see its success rate jump back up to its early-season levels as the two Pro Bowl-caliber linemen reintegrate themselves into the lineup.

The Ravens' one significant long-term concern lies in the secondary, where injuries and general haphazard roster construction have left the team barren at cornerback.  Jimmy Smith almost single-handedly kept the secondary afloat, but a sprained foot suffered against the Bengals will keep him out a few weeks.  Lardarius Webb has looked like a shell of himself while playing through persistent back issues, as his 1.25 EPA/G rate would rank tied for 42nd among 45 qualified cornerbacks.  Nickel corner Asa Jackson is on short-term IR, while Chykie Brown and Dominique Franks were promptly cut on Tuesday after starting on Sunday.  After claiming ex-Lion Danny Gorrer off waivers, Baltimore also promoted undrafted rookie Tramain Jacobs from the practice squad.  Those two, plus Webb, are the only healthy corners on the Ravens roster at the moment.

Fortunately for the Ravens, only three of their final seven opponents rank in the top half of the league in passing EPA/P, and one of those games is a home date with the imperceptibly tumbling Browns.  Smith should return at some point during a three-game post-bye stretch against the Saints, Chargers and Dolphins, as those latter two games could have a particularly large say on the AFC Wild Card chase.

Ultimately, the overarching metrics suggest the Ravens will be fine.  These rankings have Baltimore a reasonable seventh among AFC teams, but AFA is actually harsher on the Ravens than most metrics.  Entering Week 8, DVOA ranked them second overall, while SRS currently sees them as the best team in the AFC North.  Indeed, looking purely at success rate, the Ravens are above-average on both offense and defense this season. Their week-to-week rates have not really deviated over the past two losses, suggesting that misfortune is at play during this mini-losing streak: 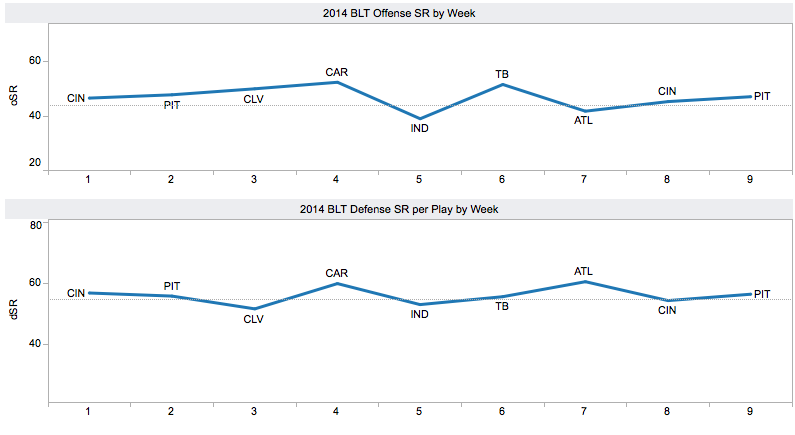 Baltimore sacrificed much of its margin for error by losing two straight division games, and disaster could still strike if that aforementioned three-game post-bye stretch goes poorly.  Nonetheless, with Jimmy Smith and the offensive line on the mend, any panic surrounding the Ravens seems premature.


- If only by default, the New Orleans Saints have appeared to seize control of the woebegone NFC South.  With their Thursday night romp at Carolina, the Saints moved into sole possession of first place in the South for the first time this season, and given the dysfunction of the other three teams, it would be a surprise if New Orleans ever relinquished control.

In last week's Pooch Punts segment, I suggested that the Saints weren't taking advantage of their quietly excellent running back corps.  Against the Panthers, New Orleans ran the ball 37 times, compared to 34 pass attempts for Drew Brees.  Overall, the Saints didn't have a ton of success running the ball, but they did call 12 run plays compared to five passes in the red zone.  Perhaps not coincidentally, New Orleans scored touchdowns on four of its five red-zone trips, with the lone exception being a Brees interception.

With Mark Ingram's return from a broken hand, it appears the Saints have discovered a happy medium.  Over the past three weeks, only six teams have run the ball more, and in third-and-short (three yards or less to go), the Saints are one of 12 teams to run more often than they have passed.  Essentially, New Orleans is not only running well, but they are running in game situations when the math suggests that running is more advantageous.  Denver may be the best passing offense by a wide margin, but it is quite clear which team possesses the league's most well-rounded attack: 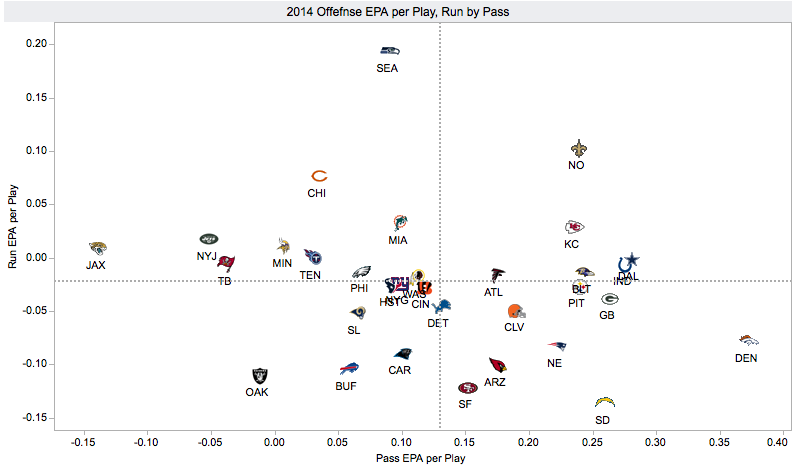 The offense alone will likely suffice to take the division crown, but if the Saints also happen to exhibit a bigger gap between offensive and defensive efficiency than any other team.  In determining whether the Saints could challenge the top NFC contenders, it would be helpful to look for solutions to their 28th-ranked defense.

The tempting solution is to suggest that, much like the offense, the Saints defense has been measurably worse on the road than at home.  However, breaking down the splits, the Saints actually exhibit a puzzling reverse platoon:

It's actually the road improvement that is new; under Sean Payton, New Orleans has been one of the worst defenses in terms of yards allowed per play, regardless of location.  It's not entirely opponent-related either, as the Saints have played two top-15 offenses on the road (Cleveland, Dallas) and one at home (Green Bay).

As we discussed with the Steelers, location is obviously not a controllable element.  What might be controllable is New Orleans' improvement on pass defense.  Even with big free-agent acquisition Jairus Byrd out for the season, the Saints have steadily been on the rise since that disastrous Sunday night showing at Arlington:

Indeed, after conceding 20 pass plays of 20 or more yards over the first five weeks, fourth-most in the league, the Saints have allowed just eight such gains over their last three games, ninth-fewest in the league.  Notoriously blitz-happy defensive coordinator Rob Ryan has dialed back the pressure in that time span, and the edge-rushing tandem of Junior Galette and Cameron Jordan has actually boosted New Orleans' sack percentage to 9.2 percent over the last three games.  At the time of their Week 6 bye, the Saints' 3.3 percent sack percentage ranked 28th in the league.

New Orleans has uncracked a couple holy grails, generating pressure with a four-man rush on defense and finding a happy run-pass equilibrium on offense.  Three games is too small a sample to draw long-term conclusions from, but this is a trend to keep an eye on as the NFC seeks a clear-cut top contender.