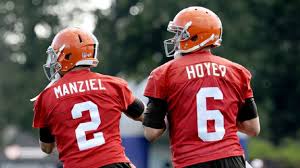 The Browns are sitting in 4th place in the tight AFC North, but have a winning record at 7-6. It's not unreasonable to think they could still qualify for the playoffs, but their journeyman QB's last two games were among the worst he has played. The team is wondering out loud if starting rookie Johnny Manziel gives them a better chance of winning.

At least one Cleveland "analyst" believes that analytics is pointing toward starting Manziel but that going with Hoyer is a victory for common sense. I'm not sure what analytics this guy might be referring to, though, as Manziel has almost no numbers under his belt to compare. And yet it's a worthwhile question, so let's look at Hoyer's production and compare that with a relevant sample of 1st round rookie production. It might not tell us anything at all, but if rookies tend to do measurably better or worse than how Hoyer has played, it might give the Browns' coaching staff some support for their decision.

I looked at Expected Points Added per Start and Win Probability Added per Start for Hoyer and for all 1st-round rookies since 2009. I chose 2009 simply to get over 5 years worth of QBs, and not for any systematic reason. We're not sure if Manziel will turn out to be a turnover machine or the playmaker the Browns hope he'll be, so I'm going to look at the entire range of rookie performances. This includes Bridgewater, Manuel, Luck, Griffin, Bortles, Luck, Freeman, Tannehill, Locker, Weeden, Newton, Gabbert, Ponder, Bradford, Sanchez, Tebow, Stafford, and Sanchez.


It would be fair to note that this list includes QBs who are dissimilar to Manziel. He'll almost certainly be far more accurate than Tebow and far more mobile than Weeden. But what matters is overall effectiveness, and in that department all we know is that he is drawn from a group not unlike other 1st rounders. You might be tempted to chuckle and think that of course Manziel will be better than Weeden/Tebow/Gabbert/etc. But lots of smart football people were just as confident that Weeden, Tebow, and Gabbert would be better than they were.

Here are the average production numbers limited to games in which a QB had 15 or more active plays.


The average production in terms of Expected Points Added and Win Probability Added show that the difference between Hoyer and a recent 1st-round rookie is very slight. The rookies appear to have an edge in EPA, while Hoyer has been a little more clutch with slightly higher WPA. That really doesn't tell us much.

Keep in mind that although these numbers are slightly positive, they are well below-average for a modern QB. EPA and WPA were originally modeled to make zero be the average, but it's not for two reasons. First, passing tends to have a consistently higher production value than running, so passers will naturally tend to have positive EPA and WPA. Second, the game has evolved even over the last few years to make offense--both running and passing--easier.

What we're really interested in is the full distribution of performances. We know what we're getting with Hoyer, but a rookie like Manziel is much more of an unknown and as such would come with a much wider variance. So here are how the distributions compare. The first chart is a histogram of EPA/G. It shows the frequency of poor, average, and good games for Hoyer and the reference set of rookies.

As expected, Hoyer's distribution is relatively narrow. He tends to have below-average output, but not too below-average. But take that with a grain of salt. With only 20 starts to evaluate, there's going to be a lot of noise in his distribution. The next chart plots WPA/G in the same way.

Similar results, but you can see Hoyer has had a few more clutch outings than we'd expect given his overall production. Still, not a lot to go on to distinguish Hoyer from an average 1st round rookie, which could just be the insight we're looking for.

There doesn't appear to be much risk going with Manziel over Hoyer if that's where the Browns want to go. By the same token, Hoyer isn't bad enough that there's an obvious upside to going with Manziel either. I suspect they're tempted to go with Manziel, which is why they're making those noises, and knowing that there isn't much downside to that alternative might embolden them. The Browns might want to think of things in terms of risk-reward tradeoffs. If they're going up against a team they are confident their defense can handle well, they should stick with Hoyer. But if they feel like they'll need more production than what Hoyer tends to give them, they should roll the dice with Manziel.