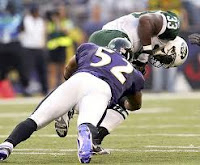 No one needs statistical analysis to tell us Ray Lewis is an all-time great. A case has been made that he was the greatest linebacker of all time. Until this season, possibly his last, he showed little signs of aging. But age and a triceps tear may now have ended his amazing career.

Ray Lewis is the kind of player you absolutely need to watch with your own eyes to appreciate  Stats, advanced or otherwise, do him no justice. If you ever get the opportunity, watch the replays of the 2000 season's Super Bowl or any game from that year. Ray Lewis was super-humanly fast and powerful.

As a fan who'd watched more than his share of football, I was trained to expect patterns. Here's the same old hand off up the middle, RB sees a hole, cuts, 5 yard gain. Pitch to the outside, RB tries to turn the corner, squeezes around the DE, turns up field, might break off a big run if he can shake a tackler. Play action, 10-yd pass to the TE over the middle. Let's face it. A really big chunk of NFL football is predictably boring.

But watching Lewis at his peak confuses the brain. The rules and patterns of typical NFL plays that we expect to see were broken. Instead of RB sees a hole, cuts, 5 yard gain--it's RB sees a hole, cuts, 5-yd...OH MY EVERLIVING GOD! WHAT THE F?!! JESUS HAVE MERCY. WHAT WAS THAT?!!! Ray Lewis just penetrated from the back side of the play and dragged down the RB from behind for a 2-yd loss.

You know those video games like Madden football that usually have some sort of 'cheat code' that allows players to dial in invincibility or supernatural speed and strength attributes to their game characters? At his peak, Lewis was just like that. Lewis had the cheat code of reality in his DNA.

Although numbers aren't required, that's never stopped us before. So here are +EPA numbers for the top producing LBs of the NFL digital era. (Data begins in 2000). Except for the column on the far right, all numbers are per game averages. The right-most column is the player's grand total for the era.

Although this doesn't show us career numbers before 2000, they still show how dominant and consistent Lewis was among his peers. Even well into his mid-thirties, he was among the very top play-makers.


Although some LBs like Suggs are outside guys or pass-rush specialists, I wanted to show what Baltimore is missing this season. They're already without Suggs, so the loss of Lewis (who had clearly dropped a notch in performance this season) may be especially costly.