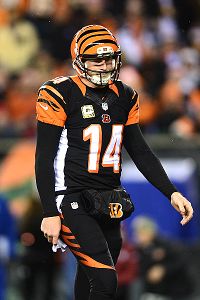 There's no arguing that Andy Dalton played very poorly last night. So far today, I've read no less than five stat-oriented articles detailing that based on AYPA, or passer rating, or QBR, (or whatever) that Dalton's night was the worst since 1950, or 1997, or the worst Bengals performance of all time. You get the idea. I could do the same thing with WPA or EPA, but to me that's mostly pointless trivia. The value of the numbers isn't the Twitter-fodder minutiae; it's the insight they can provide.

I've been ironing out the last few bugs in the live advanced stat boxscores, so I was closely watching how it developed over the course of last night's game. So everything I discuss here is taken solely from looking at that boxscore.

To review, WPA means Win Probability Added. EPA stands for Expected Points Added. SR is short for success rate, or the % of plays that help move the chains. SC is success count, or the number of plays a defender makes that results in a setback for the offense.

Dalton's WPA was -0.28, which isn't very uncommon for a losing QB. His EPA was -18.5, which means his plays (and very likely his individual performance) was responsible for the bulk of the net score difference in the game. No surprise there. But the combination of the two numbers means that Dalton played poorly early on, which put his team in a hole. To dig out, the CIN offense had to take chances, force the ball on occasion and let receivers make plays. At this point, his WPA doesn't move very much because there's not a lot of downside if you already only have a 10% chance of winning. Taking chances is the right thing to do when you're down early, but it's a roll of the dice. It's an especially dangerous place to be when the wind made throwing conditions difficult.

The CIN o-line did not have a particularly bad game. Usually when you see a QB performance like this, he was under heavy pressure. Not last night. Dalton was sacked only twice for 15 yards, and was knocked to the ground only 3 times (which includes the 2 sacks). The CIN o-line -EPA was a solid +2.8 points. That means they minimized the damage done by the CLE front-seven pretty well. That puts even more of the blame on Dalton's shoulders.

On the other side of the ledger, Dalton was not helped out by his receivers. Take a look at their catch rates (50%, 30%, 25%, 50%,...). Of course, QB accuracy has a lot to do with that, but they were not getting open. And they weren't getting any extra yards after the catch either. Compare the CLE and CIN receivers' yards per reception (YPR). CLE's were 10, 10, 15, 20..., while CIN's were 10, 8, 10, 4, and 3. Not a single CIN receiver had a significantly positive impact on that game. Even on badly beaten teams, at least one receiver will usually be able to exploit a favorable matchup.

And if I recall, there was a defense on the field as well. CLE's secondary had a great night. Tight coverage. Made plays. It's impossible with just numbers to tell how much of this is due to Dalton and how much is due to the defense, but even an untrained eye could tell CLE's secondary was playing well. Look at CLE's top defenders from the game. It's packed with CBs and Ss.

CIN's running game wasn't helping either. Jeremy Hill had 55 yards on 12 carries for a nice 4.6 YPC. But his fumble was exceptionally costly and wiped out any positive contribution the CIN running game may have otherwise had.

Looking at the same numbers, someone else might have a different take. And that's fine, because at least we're getting toward some deeper level of understanding. I hope football analytics does end up being about building ever more complex ways to rank things (games, players, teams). For me, it's about understanding and gaining insight.