Ben Roethlisberger had never thrown six touchdowns in a game entering Week 8 of the 2014 NFL season. Then, he threw six touchdowns in back-to-back weeks (against formidable defenses, albeit with some injury struggles). In the history of the NFL, there have only been 42 games where a quarterback threw six or more touchdowns. So, what are the odds that Big Ben would do it not once, but twice? And what are the chances he does it again next week against the Jets? 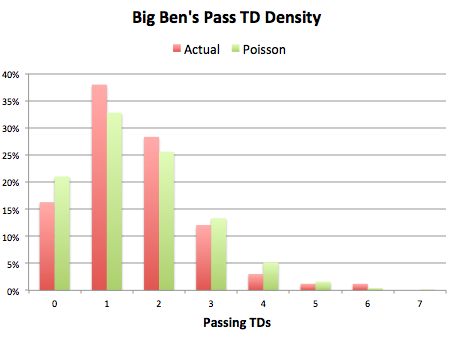 Above you can see the probability that Big Ben throws any number of touchdowns in an NFL game. This density is based on his historical game-by-game performance up to this point in his career. Since he had never thrown six touchdowns in a game up until two weeks ago, it could mean that we are dealing with a situation where his historical data actually does not provide an accurate representation of future performance. That being said, we can fit a poisson distribution pretty accurately to describe Big Ben's passing touchdown trends.


Based on the Poisson, in any individual game, Roethlisberger has a 0.42% chance to throw six touchdowns and 0.54% chance to throw six or more (he's thrown two in 166 career games including playoffs or 1.20% of the time). If we assume that each game is independent - more on this in a second - that means there is a 0.0029% chance of back-to-back six-plus touchdown games and 0.000015% of three straight such performances (although at this point, since he has already had back-to-back performances, there would be a 0.54% chance of three straight).

There are two big assumptions here that we have mentioned:

Here, 1) is the bigger assumption. It is definitely possible that the offense is running different plays or schemes that could result in this performance. He threw 49 passes two weeks ago and 37 on Sunday night. Since the start of 2012, he has averaged 36.1 passing attempts per game, so not drastically different, and he has had six games in his career with at least 49 attempts. The Steelers could still be running more downfield plays, more passing plays in the red zone, etc...

For independence, the question is: Does previous game play affect future game play? To check this, we did a simple regression of passing touchdowns from the previous game on the next game. 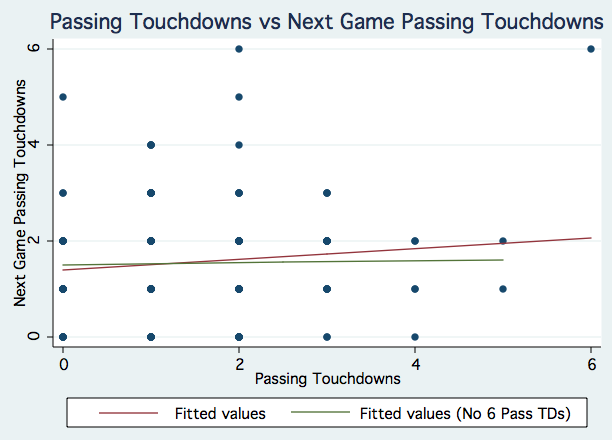 We looked at two separate fits, one with the six touchdowns the last two weeks and one without it. Without it, the r-squared is 0.0004, and no significance on the coefficient for passing touchdowns. If we include the six touchdowns, the r-squared is still just 0.0120 and while the t-stat is much higher, it is still not significant even at the 90% level. This is just a cursory check to confirm our assumption of passing touchdown independence.

It is conceivable that both the assumptions hold, and there was really just a 0.0029% chance of Big Ben doing what he did - roughly 3 out of 100,000. I think it's more likely, though, that play-calling changed over the last few games. We would need to do a more detailed study of play-calling in every situation throughout the game (and sample size would be extremely small).