Just like last year, the fight for the final wildcard spot in the AFC was a wild ride. San Diego's demise and Baltimore's struggles on offense made things really interesting between 1 and 4pm. BAL, HOU, KC, and SD all had at least a 40% shot at the final AFC berth at some point in the afternoon.

Last season the Chargers were the beneficiaries of losses by BAL, PIT, and MIA. They needed a win and all three to lose to qualify. This year KC shut down their offense and let the Ravens in with their win over the Browns. Here's a chart of how the probabilities flowed through the afternoon: 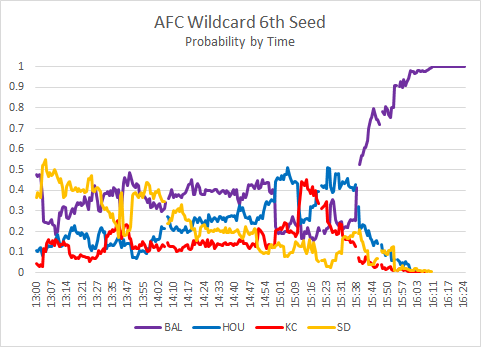 Things looked pretty dark for Baltimore fans around 3pm (15:01). That's when the Browns went up 10-3. Then things flipped pretty quickly after the Ravens pulled ahead 13-10 and the Chargers turned the ball over on downs in the red zone around 3:44 (15:44).

The Ravens squeaked in, but injuries on the offensive line and in the secondary have taken a toll. They'll be on the road against the winner of tonight's CIN-PIT game, and should be a clear underdog in either matchup. Speaking of seeding probabilities, you can still catch live seed probabilities during the 4pm games here. There's a lot still up for grabs in the NFC. Just click on 'Seeding' at the top.