In what would end up as the first tie of the 2014 NFL season, Carolina and Cincinnati both were hot out of the starting gate. The Panthers received the opening kickoff and went on a 16-play, nine-minute, 86-yard touchdown drive to start the game. We can look at the development of the drive using our Markov model: 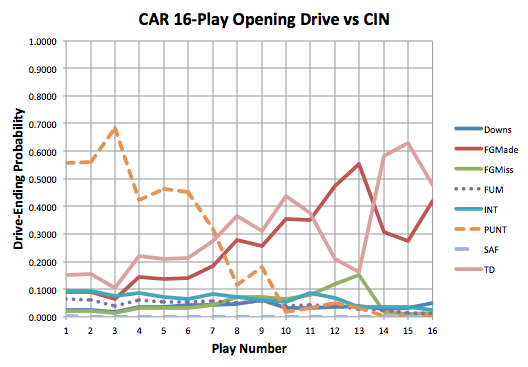 The Panthers converted four third downs (plays 3, 6, 13, and the touchdown score on play 16). The biggest play of the drive was a 3rd-and-13 conversion after a Vontaze Burfict roughing the passer penalty, increasing the touchdown probability from 16.4% to 58.1%.

Not to be outdone, the Bengals would take over with 5:45 left in the 1st quarter; they would march down the field for the second and only other drive of the opening period. Cincy ran 6:24 off the clock, for a 14-play 69-yard touchdown drive, and also managed to convert four third downs. 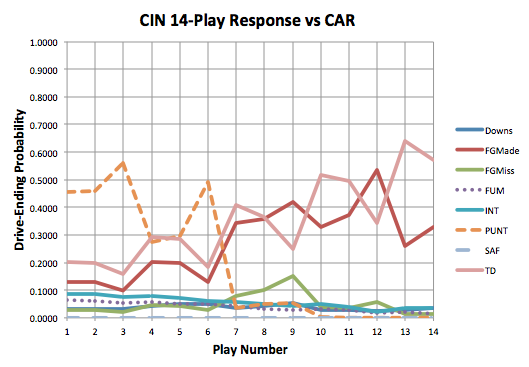 The two teams went back and forth the entire game - the biggest lead by any team was seven points in a game where 74 points were scored. Thanks to a missed Mike Nugent chip shot in overtime, the teams came away with the much displeasing tie. 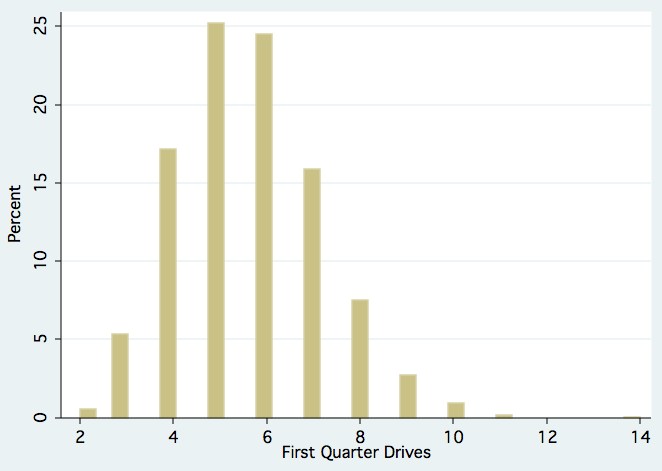 Of those 20 times, only twice did both drives result in a touchdown. Seattle versus Atlanta in Week 15 of 2010 and Indianapolis versus Cleveland in Week 7 of 2012.