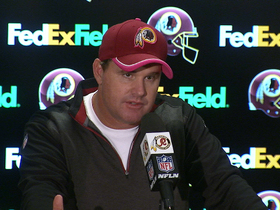 Trailing SEA by 7 with 10:40 to play in the 3rd quarter, WAS attempted an onside kick. Surprise onside kicks are generally a good idea any time the kicking team feels it has better than about 40% chance of successful recovery, and can be even lower depending on the time and score. Surprise onside kicks are recovered near 50% of the time, so depending on the receiving team's tendencies it's an option that should always be on the table. Let's examine at Washington's attempt a little more closely.

It's been quite a while since I first did a win probability analysis of onside kicks, but the fundamental concepts still apply. The conventional kickoff is a relatively certain alternative. It can be expected to give your opponent possession at very close to his 22-yard line. The onside kick is a gamble with two possible outcomes. As long as the net value of the gamble is higher than the value of the conventional kickoff, it's a good idea.

Using the new Win Probability (WP) model, which is far less noisy than the original and factors in timeouts, the Redskins' values looked like this:

Let's call the expected success rate for recovering the onside kick 'S'. The net value of the onside gamble is:

I'm not an expert in reading receiving squad tendencies, but the WAS coaching staff is. If they believed they had better than a 41.5% shot at recovery, it was a good bet. Ultimately WAS failed to recover, but did manage to force a three-and-out on SEA's ensuing possession. That's a good lesson that even when gambles don't work out, it doesn't spell total doom. Part of the value of the onside gamble is the 0.177 WP given a failure.

Let's assume that WAS had the league average of approximately 50% chance at recovery. On net that adds only .01 to their overall WP. Like I always say, every little bit helps, but the decision to kick onside was not a major factor in the game's final outcome. Ironically, immediately prior to the onside kick, WAS passed up an opportunity on 4th and 1 at the SEA 9. That cost them more than twice as much WP as the onside kick bought them. But given SEA's defense, the kick the FG then try for the onside might have been optimum play. It depends on what WAS's chances were to get that one yard and convert.

Plus, as a heavy underdog, WAS needed some breaks to go their way. Underdogs prefer higher-variance outcomes because if both teams play exactly to their talent level, the favorite will always win. If it were me on the sideline, I'd have preferred to do both the conversion attempt on 4th down and the onside attempt.