The Cowboys had the opportunity to clinch the NFC East on Sunday after three consecutive Eagles' losses. With a win over Indianapolis, Tony Romo would guarantee a home game in the playoffs. The Cowboys came out of the tunnel scorching hot and went on a 16-play, eight-and-a-half minute touchdown drive. Dallas would go on to score touchdowns on each of their first four drives, never looking back in an absolute demolition of the Colts, 42-7.

Let's take a look at this opening drive using our Markov model: 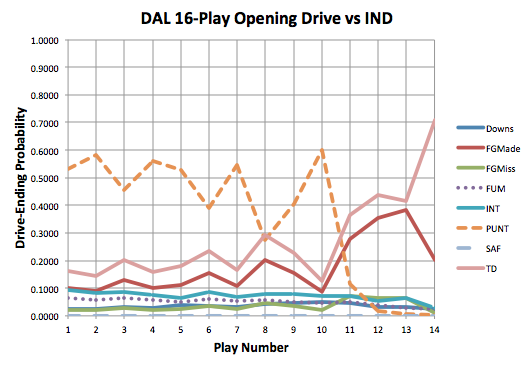 Tony Romo and DeMarco Murray steadily moved the Dallas offense down the field, achieving first down after first down - made easy by a manageable 3rd-and-2 on play five. In fact, the Cowboys only faced one difficult situation, on play 10 (the large spike in punt probability and dip in scoring probability). After a -1 yard carry and a batted down pass, Romo and company lined up on 3rd-and-11 from the Indianapolis 48-yard line. Lance Dunbar was stopped in the backfield after a short dump off, but Jerrell Freeman was called for a taunting penalty, giving Dallas new life and increasing their scoring probability threefold, from 21% to 65%.

The Cowboys would not face another third down on the drive, converting two more first downs before Romo connected with Terrance Williams on a quick slant for the opening score of the game.

Before exiting the game for Brandon Weeden to get some garbage time reps, Tony Romo posted a +0.33 WPA, an 80.0% pass success rate and 90.0% completion percentage (18 completions on 20 attempts). Heading into the playoffs, the Cowboys offense is firing on all cylinders, Romo in particular. Over his past three games, the Cowboys' quarterback has averaged +0.29 WPA per game.