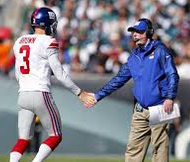 After a crazy reversed fumble out of the end zone, taking a touchdown away from the Redskins at the end of the first half, the referees hit Washington with two unsportsmanlike penalties to be assessed on the opening kickoff of the second half. That means Josh Brown would kickoff from the Washington 35-yard line, down three, with a full half of football to go. Surprise onside kicks convert around 55%, although you have to assume Washington anticipated one - and they did, as they put their hands team on the field. Defended onside kicks convert only around 15%. So, what was the break-even point to kickoff onside? Seems like a no-brainer, right?

That makes the break-even point PRecovery = 15.9%, which is right around the expected conversion rate.

Remember, though, we did this analysis assuming the Giants would be able to pin the Redskins at the five 100% of the time. This is a huge assumption, and we do not have any data to build a distribution since a kickoff from the opposing 35 is so rare. In reality, we would assume there is a 100% chance they could force a touchback. If we use the touchback win probability value of 56.7%, the break-even point drops to 2.8% - significantly lower than the defended onside kick conversion rate. In truth, the true WPNon-Onside Kick is probably somewhere between 56.7% and 58.1%, resulting in a break-even point between 2.8% and 15.9%. 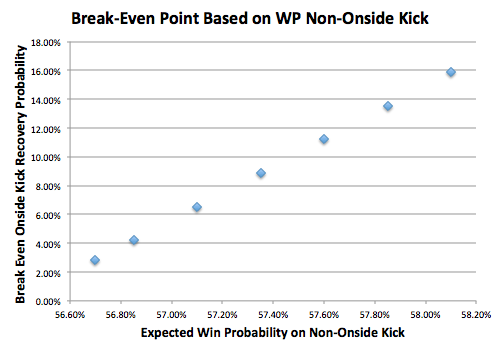 So, yes, the onside kick was the right call. Though, if the Giants believed they could pin Washington inside the five, it is really a coin flip.