There's no question Mike Smith made an error calling a timeout with 55 seconds left to play. To recap, ATL was down by 2 and faced a 3rd and 2 on the CLE 35. If Smith needed time to draw up the play, he could either rely on the Browns using a timeout or wait until the play clock wound down to call his own timeout. It would have been suicidal for CLE not to have used a timeout there, so I'll assume the error had the effect of saving CLE a timeout while wasting one of ATL's (which would be inconsequential anyway).

I initially thought I'd do a post on how small a difference that really makes, and that a lot of the criticism was overblown. The decision to call a pass on the subsequent 3rd down was the bigger question but could be defended on game theory grounds. However, after looking at the numbers I think think both decisions were costly enough to justify the uproar.

Using the new WP calculator, a 3rd and 2 with 55 seconds to play gives ATL the following:

That's a difference of about 4 percentage points of WP. Sounds small, but singular coaching decisions rarely get bigger in terms of WP leverage.

The bigger issue might be the play call to pass on the 3rd and 2. My instinct was that the pass was justified because CLE would be stacking the line looking for the run. Running into a brick wall for a yard or no gain would only force CLE to burn a timeout. The payoff of a significant gain would be worth it. But the WOPR disagrees with me pretty strongly. And it even explains why I was wrong. Here's how things break down according to the game simulator. (sWP stands for simulated Win Probability.)

The combined effect of both decisions drops ATL's chances of winning from 68% to 60%. It's certainly not a death blow, but it matters. Every fraction of a percentage point counts. Interestingly, the sim sees the timeout error as relatively minor--about 0.02 sWP.

The reason for the big difference between running and passing appears to be from two factors. First is the risk of a turnover. Second is the risk of a loss of yardage, either through a sack or penalty. Passing has a bigger risk of a significant loss, and the probability of a successful kick is highly sensitive to every yard at the outer fringes of field goal range.

Once CLE got into field goal range, they had a similar play calling dilemma. With no timeouts and 16 seconds to play, CLE had a 1st down at the 30. A lot of coaches would have settled for the field goal at that point. Mike Pettine decided to be aggressive. They passed the ball into the middle of the field for a chunk of yards and quickly spiked the ball. I admired the call--closer is always better when it comes to field goal attempts. The WOPR likes this decision too, but just barely. The sim always seems to be able to spike the ball in time, but the risk of a turnover or big loss dampens its enthusiasm. It gives CLE a .712 sWP for passing the ball and a 0.704 for attempting an immediate field goal. But it really loves a run there, giving CLE a victory in 76.8% of the 100,000 simulated games.

One final observation. In-game coaching decisions certainly make a difference, but game outcomes are dominated by the play on the field. Ryan's pass on 3rd and 2 was incomplete. CLE moved the ball 60 yards in 45 seconds, and Billy Cundiff made his kick. That's why CLE won. Had ATL completed the pass on 3rd and 2, no one would be talking about Smith's timeout. Instead we'd be talking about how bold he was to allow his offense to throw the ball.

Look at how the play unfolded. CLE rushed 6, but ATL picked up everyone. CLE was playing man with one high safety. Roddy White picked his man on the umpire, and had Ryan been able to see him through the rush it would have been an easy completion. 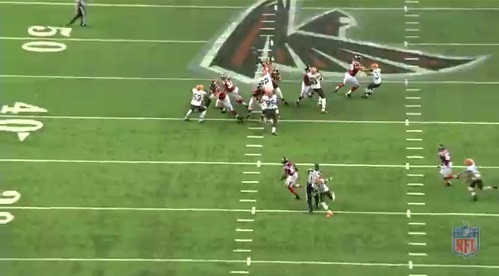