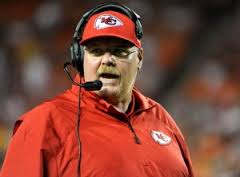 Trailing by 3 with just over 5 minutes to play, OAK needed to convert a 4th & 1 on the KC 43 to keep their hopes alive. The broadcast replay appeared to show a fairly murky outcome. The refs quickly awarded OAK the first down, but even the staunchest Raiders fan would have been nervous if the ref went under the hood on this one.

KC head coach Andy Reid had two timeouts and both challenges in his pocket. Here's why he should have challenged. Allowing the play to stand without review results in an OAK 1st & 10 at the KC 42, worth 0.564 Win Probability (WP) to OAK. A failed challenge (the play is upheld) would have the same result, but KC would have one fewer timeout. That's worth a 0.558 WP for KC. An overturned call would give KC the ball, worth a 0.783 WP. [All of these WP estimates are based on the new WP model.]

For a challenge to be worthwhile, its net expected WP would have to be at least as high as allowing the play to stand without review. The math looks like this (p = probability the play is overturned):

Solving for p, Reid would need a mere 0.027 probability of the play being overturned for a challenge to worthwhile. That's a really, really low bar. I'd submit that just about any call on any play in the NFL would be overturned 3% of the time.