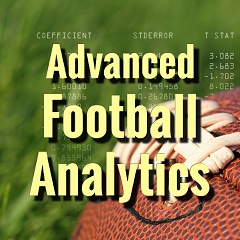 Brian Burke is back to recap the 2014 regular season. Brian and Dave begin the show by discussing the significance of the non-pass interference penalty in last week’s Dallas-Detroit game. Next, Brian reviews his recent posts on the idea of analyzing individual player contributions as “compliments and substitutes”, the college football rankings process and his own NFL ranking systems on AdvancedFootballAnalytics.com. They close out the episode with a look back on the “best of” 2014, preview this weekend’s divisional round games and make a friendly wager on Saturday’s Ravens-Patriots game.

Subscribe on iTunes, on Stitcher or via RSS. Don't forget to leave a rating!